A President Makes Baseball History (and Buys Pants) in Pittsburgh

The largest of the nation's presidents left a big impression in Pittsburgh. 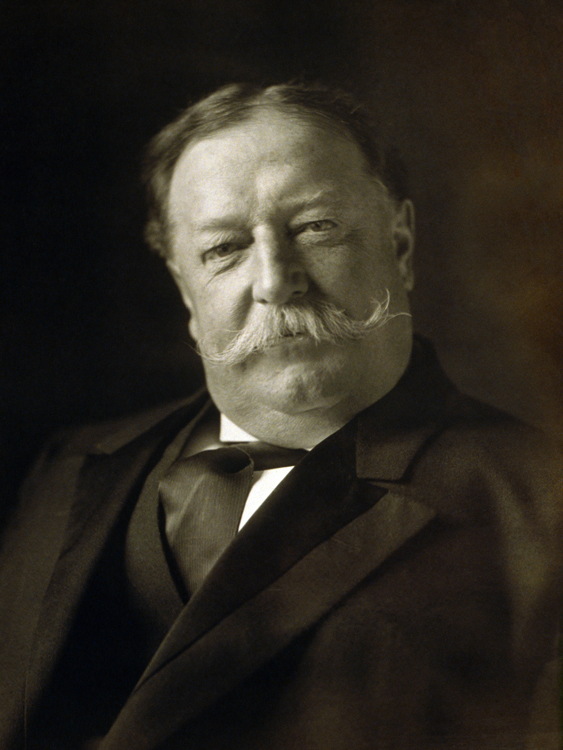 Everybody seems to know the story about how William Howard Taft, 27th President of the United States, was so fat that he got stuck in the bathtub at the White House and had to have a bigger tub made and installed. Often called “Big Bill,” he was just a bit taller than 5’11’’ and weighed about 350 pounds — our biggest president by far. He didn’t let his size slow him down, however, and he came to Pittsburgh several times while serving as commander-in-chief.

He was sworn in on March 4, 1909. Before the end of his third month in office, he boarded a train to Pittsburgh to speak at the annual banquet held by his fellow Yale alumni in the Western Pennsylvania Yale Club.

His schedule was full: From the East Liberty Station, he was driven to Rodef Shalom on Fifth Avenue in Shadyside and spoke during the regular Shabbat service. It was estimated that 5,000 people waited outside Rodef Shalom to see him; The Pittsburg Press reported he may have shaken 1,000 hands while he was there. He made a small gaffe when he referred to the synagogue as “this beautiful church,” but he can be forgiven for the error; he was the first sitting POTUS to speak during a Jewish service.

After the temple, Taft was driven to Lawrenceville where he gave a short speech dedicating a new fountain in Arsenal Park for the Daughters of 1812. There were huge crowds of cheering fans there, too.

As noon approached, “Big Bill” and his people got on a train to Sewickley for a luncheon in his honor at the Allegheny Country Club. Taft’s brother Charles was in this entourage; Charles was a part-owner of the Chicago Cubs, who happened to be playing the Pirates that afternoon at the old Exposition Park on the North Side. The president decided he would make a change in his schedule (not an easy task); he wanted to see that ballgame. He bet his brother a cigar that the Pirates would win, especially with Honus Wagner on the team.

No such luck. The Cubs walloped the Bucs 8-3 — but with that game, Taft became the first sitting president to attend a baseball game outside of Washington, D.C. One month later, the Pirates played their final game at Exposition Park; the team’s next home, Forbes Field, was ready.

When Taft was back in town the next year — he came to open the 1910 International, then called the Annual Exhibition, at the Carnegie Museum of Art on May 2 — he went to the new ballpark in Oakland to watch the Pirates defeat the Cubs, 5-2. Attendance that day was a record 20,265.

During that 1910 trip, he apparently was told that Kaufmann’s Department Store downtown carried clothing for big men. In his fascinating book “Fallingwater Rising,” historian Franklin Toker notes, “In 1910 the store profited from its ability to fit President Taft’s mammoth bulk with a new pair of trousers right off the rack.” It was good publicity; for many years, a photograph of the hefty president hung in the store.

Taft, a one-term president, made a third visit to Pittsburgh in October 1911 to attend the first national mine safety demonstrations at Forbes Field. After leaving the White House, he lost 70 pounds — and in 1921 was appointed Chief Justice of the Supreme Court, becoming the only man ever to serve in both of those high offices. He also was the last American president to sport a mustache while in office.

This article appears in the June 2015 issue of Pittsburgh Magazine.
Categories: Rick Sebak