It's okay to let yourself be a rose-spectacled Pollyanna for just a minute this Thanksgiving. 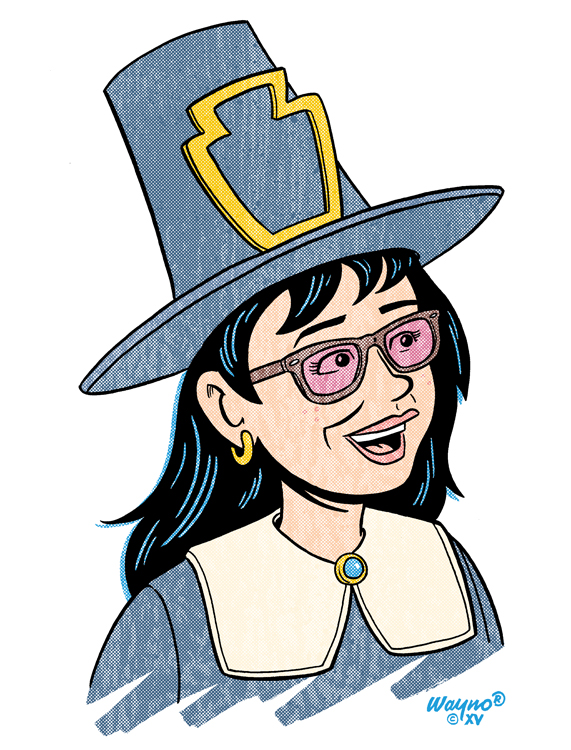 Let’s go around the table and say what we’re thankful for.”

As a feelings-suppressing introvert, my least-favorite part of Thanksgiving is this time of sharing (gross) and emoting (blech). For my father, the minister and professional extractor of emotions, it’s his favorite part. Let’s talk. Let’s share. Let’s speak words to each other and feel them and share them and sharingfeelingthanklove.

It’s enough to gag a Pilgrim.

I prefer Thanksgiving to be “let’s eat; let’s football; let’s keep our feelings (gag) to ourselves.” I’d rather save my deep feelings for inner reflection. But each year, I have to share (ugh), and I do so dutifully because my father raised me right, unfortunately. I sit there with 15 to 25 family members staring at me (ick) while I say the party line: “I’m thankful for my family. My health. God bless America’s purple mountain majesties from sea to shining sea — the Niña, Pinta and Santa Maria. Next.” I pass the proverbial hot potato of sharing to my left before it scalds me.

A few months ago, I said to my husband, “What should I write about for the November issue?” He said, “Write what you’re thankful for,” and I said, “Blech! That’s terrible and predictable and would force me to be some gross, rose-spectacled Pollyanna telling Pittsburgh why Pittsburgh is awesome because of bridges, inclines and ‘suck it, Portland,’ and I’d rather lick a Pilgrim’s dirty shoe buckle, thank you very much.” If I had a microphone, that’s the point at which I’d have dropped it.

Then I got to thinking. What should we really be thankful for? Can we talk about it in a matter-of-fact way that doesn’t become treacly sentimental while Lee Greenwood plays in the background and a tear plops from a bald eagle’s eye?

Read the party line: “I’m thankful for the bridges, the sports teams, the confluence (drink!), the inclines, Rick Sebak …”

But later, when you’re alone, dive a little deeper.

Be thankful we have a mayor who WORKS. It doesn’t matter if his every decision is one you agree with, and I’m sure lots of you would like a word with him about bike lanes. What matters is this … a captain who doesn’t want to work, couldn’t care less about the vessel and doesn’t bother to prepare for the storms predicted to roll in is helming a ship that eventually will sink.

A captain who is on deck at the crack of dawn, putting data to work to find the best route, who cares about the ship enough to sit up late and watch over her, is the kind of person we should be thankful is at the helm. We just hope he’s not shouting, “Tunnel ahead! Slack the mainsheets!”

Be thankful for what the state’s film production-tax credit brings … jobs, dollars, the chance to show Hollywood that our city is one of the most picturesque. The chance of running into Jake Gyllenhaal or Ewan McGregor is an added bonus. We won’t talk about me sprinting down a sidewalk and leaping in front of George Takei to beg for a picture.

Be thankful for the churches, and I’m not talking religion. I’m talking about their delicious fish sandwiches and pierogies. It’s the churches that remain committed to passing down recipes from generation to generation. Outside of spending an entire day in my kitchen, I know the only other place I can taste Syrian food like my late gram used to make is to head to the food festival at a church in Bridgeville. Avant-garde “does this amuse-bouche have eyeballs?”-type food at cutting-edge restaurants is fun for a night out, but it’s the quiet old churches up the street that make sure we still get our haluski or kibbee.

Be thankful downtown isn’t deserted after 5 p.m., save for gangs of pigeons that will straight-up mug you for a French fry they’ll then take turns regurgitating.

The burgeoning robotics field. The wedding cookie table. The immense amount of history here, enough for Travel + Leisure to name us one of the best U.S. destinations for history buffs. That whatever art form stokes your passion, you can practice it, perfect it and share it here, and it will find an appreciative audience, even if your “art form” is regularly telling Portland to suck it. Ahem.

Let yourself be a rose-spectacled Pollyanna for just a minute this Thanksgiving. Appreciate the positives.

Then you can go right back to writing that fiery email to Bill Peduto about “all those jagoff bike lanes, n’at.”

This article appears in the November 2015 issue of Pittsburgh Magazine.
Categories: From the Magazine, Hot Reads, PittGirl