A New Steel Curtain Is Rising

Will the new Steelers zone at Kennywood Park be ready in time for opening day? 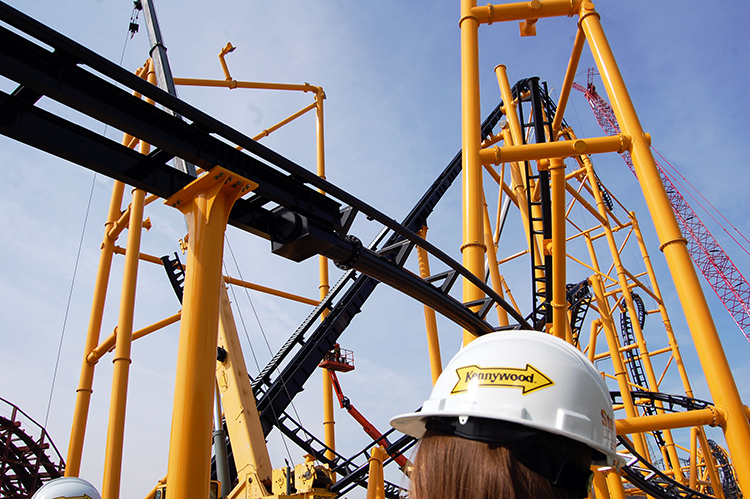 It’s the first day of spring and Kennywood Park in West Mifflin is buzzing. The park’s season hasn’t even started yet, but construction workers, park officials, members of the Pittsburgh Steelers organization, city officials and members of the press are all there for the same reason — Steelers Country.

A one-of-a-kind collaboration between Kennywood Park and the Steelers, Steelers Country has steadily been growing from the ground up since last spring, when the first footers were placed and concrete was poured.

When finished, the zone will host the End Zone Cafe & Tailgate Patio, a a sports-themed indoor and outdoor space serving tailgate-inspired food. It will also feature a special merchandise area, skill games with ID wristbands to track your time and much more.

The main star of Steelers Country is The Steel Curtain, a new, record-setting roller coaster. With 4,000 feet of track, nine inversions, a maximum drop of 215 feet and a top speed of 75 miles per hour, the coaster sets a state record for tallest roller coaster (220 feet,) a North American record for most inversions and a world record for tallest inversion (197 feet.) The 2,674,055 pound ride can hold 24 passengers and will have a two-minute duration.

Jerome Gibas, Kennywood general manager, says that while Steelers Country will not be ready in time for the park’s opening day on April 27, they are aggressively working to have the area open by later this summer, while not compromising safety and quality.

Keep your eyes peeled for more information on when everything will open — because while you can’t be among the first group to ride the coaster (that honor belongs to contest winners, park employees, members of the Steelers organization and the people who worked on it) — you could be part of the second.