Pittsburgh was featured in many rankings in 2011, from the good to the bad to the utterly confusing. 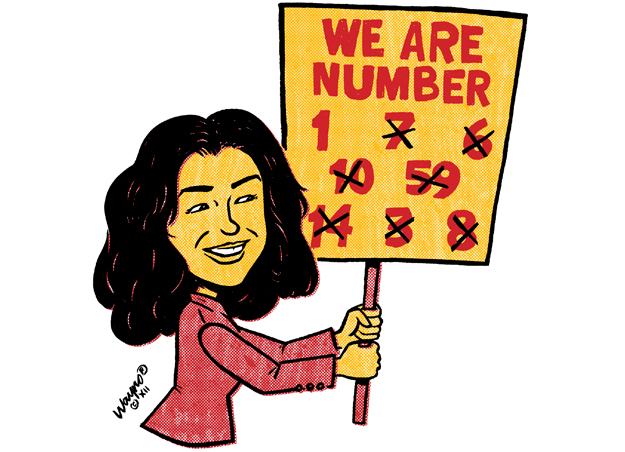 If there’s one list every Pittsburgher worth their Terrible Towel knows, it’s the Most Livable Cities list. Not that we live and die by where we rank, but we wait, knowing what a gem we’ve got here — and we hope that the rest of the world will take a look at the list, hunt for the highest-ranked city in America and then say, “PITTSBURGH?!” Just like that — equal parts exclamation and question mixed with a sprinkling of horror as they realize the Steel City beat Honolulu.

Pittsburgh spent 2011 as the Most Livable City in America, an accomplishment we (surprisingly) didn’t celebrate with a parade or two hours’ worth of fireworks. Conversely, we spent 2011 as GQ’s third worst-dressed city, as I mentioned in this column a few months ago. Now it’s time for us to look at some other lists we made in 2011.

Where can we improve this year? Where are we doing just fine? Where are we so perfect that there’s actually no room for improvement? Where, Pittsburgh, are we on the mustache-friendly meter?

Pittsburgh was named the top “Large City of the Future” in fDi magazine, while National Geographic Traveler magazine listed us as one of 20 best destinations in the world for 2012. Morocco, Iceland, Costa Brava … Pittsburgh?!  We all need bumper stickers that say simply, “Yes, Pittsburgh!”

Financially we’re the seventh-best city in which to retire, and Forbes calls us the nation’s sixth-most recession-proof city for real estate. If that gets you thinking about moving here, lucky you: We’re the second-best city in America to buy a home (according to Forbes) and the 10th-most affordable place for renters.

If you want to talk jobs, we’re the ninth-best city in which to find one. In addition, we saw the 10th-largest growth in tech jobs, while coming in as the fourth-best city for working mothers. I think that means working moms in the tech industry have hit pay dirt here.

If you’re a single mother, we’re the eighth-best city in America for you — and better yet, you can feel safe here because Pittsburgh is the 11th-most secure city (of large metro areas) in the nation.

Forbes has ranked our air as the fifth-dirtiest in the country. Before you panic and start wearing a surgical mask 24/7, take heart that we didn’t make WebMD’s “10 Worst Cities for Asthmatics.”

(wink) We’re the most flirtatious city in the whole country. (eyelash flutter) No. 1! (“accidental” caress of your arm) In my opinion, this is just fine, as long as you aren’t using that ridiculous “Did it hurt when you fell from heaven?” line — unless you’re talking to Sidney Crosby … because it may have really hurt when he fell from heaven.

We’re the eighth-worst city for dating — in spite of which, we’re ranked third in the nation for casual sex. I blame all that gratuitous flirting we’ve been doing. (wink) On the bright side, it doesn’t look like alcohol is a factor because we’re only the 59th-drunkest city in the nation.

We might not be drinking, but we sure are smoking. We’re the 14th-worst city in the nation, smoking-wise.

While you’re smoking and flirting your way to ill-advised casual sex, check your hair because Pittsburgh is the 12th-worst city in the nation for hair. With a quick scan of a Steelers tailgate crowd where mullets and hairspray-cemented Yinzer bangs refuse to die, this isn’t surprising.

We’re the third-most mustache-friendly city in America. So give yourselves a pat on the back — we’re apparently not shouting “GO SHAVE!” at random mustachioed passersby.

I’m shocked that we’re only The Sporting News’ sixth “Best Sports City,” losing out to archenemies Dallas and Philadelphia. I blame the Pirates, the black sheep of professional sports here in Pittsburgh.

Finally, Maxim ranked Pittsburgh as the eighth “Best Man City,” but Men’s Health ranked us a dismal 70th “Best City for Men.”  Let’s allow them to punch each other in their perfect six-pack abs to settle who actually got that one right.

I’d say we’re doing pretty well. We have some room for improvement, but we should be proud of what we are and who we are, and we should be proud that we didn’t make the worst teeth list … or the dangerous driving list …  or, most surprisingly, the worst cities for commuting list.

Right now, the Parkway East is crying, “What more do I have to do?!”

This article appears in the January 2012 issue of Pittsburgh Magazine.
Categories: From the Magazine, Hot Reads, PittGirl