A Lifetime of Mister Rogers Isn’t Enough for this Pittsburgher

Laurel Scholnick spent hours watching “Mister Rogers’ Neighborhood” as a child and then again as an adult, cataloging the final episodes of the iconic Pittsburgh-based children’s show. 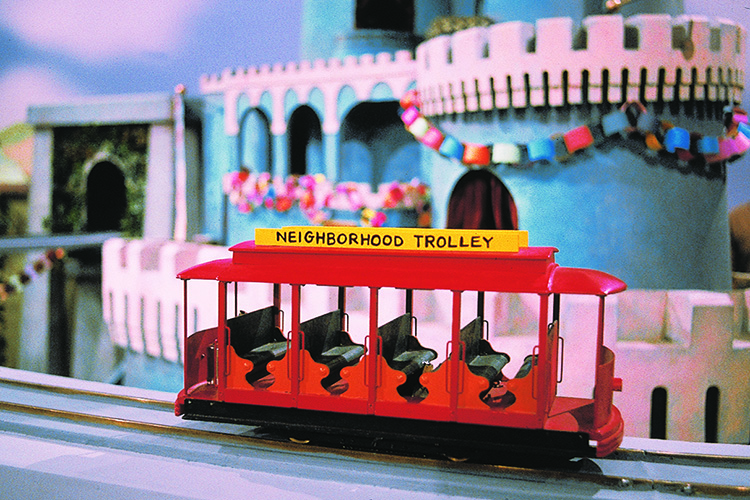 Laurel Povazan Scholnick was lucky as a child — she had Mister Rogers to look after her.

“He was one of my babysitters,” she says. “I was probably watching his show before I was even aware I was watching.”

Like millions of other American children, Scholnick watched the iconic children's program “Mister Rogers’ Neighborhood” practically every day during her early childhood in the ’70s, soaking in his message that she was special and that bad things could be worked through

“He was so soothing and his message just seemed like something I wanted to capture in my life, even at 4 years old,” she says

When she enrolled at Pitt to study psychology in the late ‘80s, it was because of her love for science — she didn’t know this move would also lead her back to Mister Rogers.

After graduating with her bachelors degree in 1991, Scholnick took a job working at Pitt’s Langley Library. Eventually, another opportunity opened up — a job as manager of the Elizabeth Nesbitt room in the Information Sciences Library. The room stored primary and secondary material relating to children's’ literature for researchers and scholars.

It also housed the Rogers Archive.

“I couldn’t believe I got the job. I felt really good. Really special,” Scholnick says. 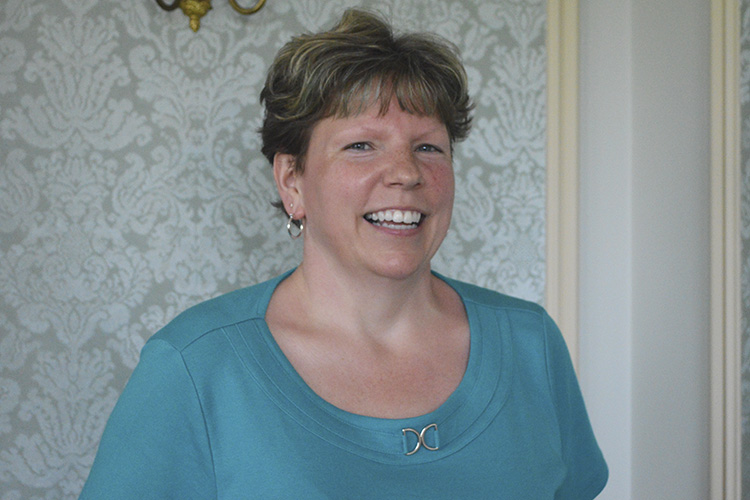 Laurel Scholnick has worked as a librarian at the University of Pittsburgh, which for years housed the Rogers Archives, since the early 1990s. Photo by Janine Faust.

The archives were originally brought to Pitt in 1984 with the intention of making items such as fan mail, props and program recordings available to researchers in early childhood education. After the grant that funded the project ended two years later, the University Library System (ULS) continued to support it by cataloging materials and responding to reference questions.

“Mister Rogers’ Neighborhood” ran for a total of 912 episodes from 1968 to 2001. Graduate students and workers in the Information Sciences Library would catalog these episodes as they came in, entering information into the ULS and the Online Computer Library Center.

By the time Scholnick arrived, the show was nearing its end, although she didn’t know it at the time. She remembers the exact day she took up the role of manager — Oct. 11, 1999.

Her main task was to maintain the room’s materials and help researchers find what they needed, although she also got an excuse to watch her favorite childhood show on the job. Between 2000 and 2005, she catalogued more than 25 episodes of the show. Her work covered the last three seasons, plus a few earlier programs.

“The show stopped being made while I was working there, otherwise I would have kept going,” she says.

She would watch one episode multiple times over several days, taking notes on details and writing up descriptions.  She would mull over exactly what she wanted to say — there was a limit on how much she could write. Scholnick also had to be precise — a comma in the wrong place could mess up the entire entry

“You’d have specific information you’d want to put in about the show so that people would find it,” she says. “You’d include a synopsis, the length of the episode, what characters were in it, what did they say, what was the message.”

Elizabeth Mahoney, the former head of the Information Sciences Library who Scholnick reported to, says Scholnick was extremely skilled as a cataloguer and confident in her work.

“Working with her was a dream,” Mahoney says. “You knew she was going to get the job done.” 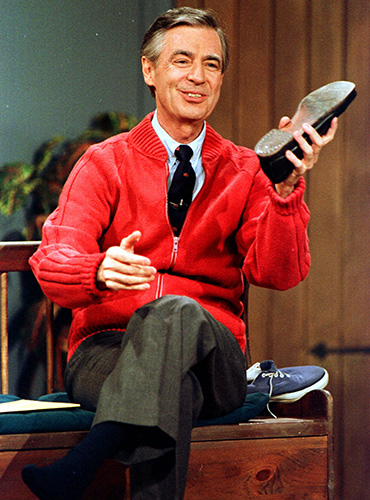 Besides cataloging episodes, Scholnick would also hunt down, record and copy segments or whole episodes for researchers and fans who wanted to own certain programs from the show. Several people would want episodes for educational purposes, but plenty had more sentimental reasons. Scholnick said there was more “emotion” involved when it came to the Rogers Archive compared to other materials in the Nesbitt room.

“Usually it was people whose relatives had been in it. ‘My mother was in this episode and I’d like to have it cause she’s sick.’ ‘My grandfather was in the show at this point,’ that kind of thing,” she says. “And occasionally ‘I just love the show.’ Some people would want to come in and just watch one in the Nesbitt room.”

From watching the show so often, Scholnick noticed several things she hadn’t picked up on as a child. She became aware of the many patterns present in the show, such as how Mister Rogers would take his shoes off during the theme song and carefully state what was going to happen next throughout the program.

“It’s good for kids to know what to expect,” she says. “He’d change it up, but it was all kind of the same things, him talking about what he’s going to do. Let’s go to the Land of Make Believe, here’s the trolley, the trolley is coming.”

Scholnick was always fascinated by the trolley as a child. Rewatching the series as an adult helped her understand the importance it played in transporting children between different worlds. It helped kids understand the difference between reality and fantasy, she says.

“Like escaping into a novel, you can go into another world, but you need to come back to your life,” she says. “That’s an adult lesson, but I think it was genius of him to have the dichotomy. It was important to have both so kids could see that difference and make that leap.” 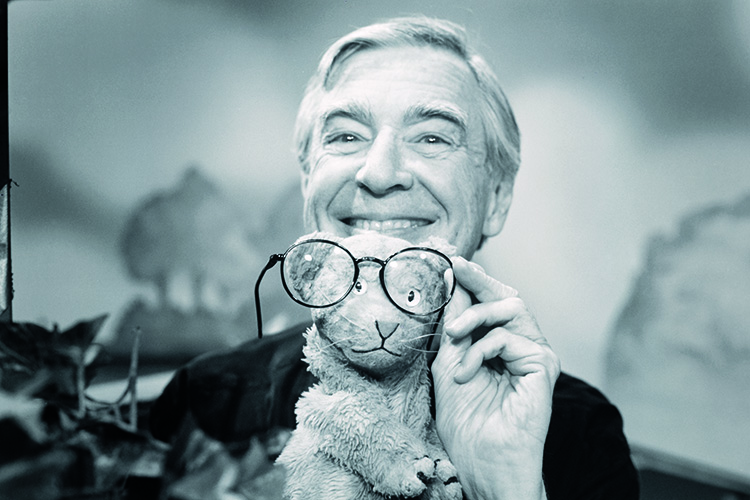 She was able to meet Rogers on two occasions. During her time in the Nesbitt room, she was invited to watch the show’s filming at the Fred Rogers Studio twice.

“He shook my hand. He said, ‘Welcome to this neighborhood,’” she says. “I’m tearing up now just thinking about it. He was so nice.”

Scholnick says from watching the show she was able to glean that Mister Rogers’ main goal in filming the show was to help kids better understand difficult things that happened in their lives and make them feel good about themselves.

“For someone to just say to you, ‘You are special’ or to sing that to you everyday, say, ‘I want you to be my neighbor, I want to meet you, I want to learn about you,’ I think that’s a big message,” she says. “That’s always stuck with me. He wanted to help, he saw a way, he put it together.”

She believes the show left an imprint on American culture because it taught parents how to approach their children concerning confusing or distressing topics such as divorce.

“Kids need to understand what’s going on. They need to be able to get upset and process that,” she says. “I think the show has gone a long way to help people understand that kids need that reinforcement and that kind of help.”

Schonick was upset when “Mister Rogers’ Neighborhood” ended in 2001, although she understood there had to be an ending point.

“I wanted it to continue, not just to keep cataloging, but I thought it’s good for kids,” she says. “It affected me. To have actually met him and found out how nice he really is was awesome.”

Fred Rogers passed away in 2003, less than two years after the final program of his show aired. Scholnick left the Elizabeth Nesbitt room in 2004 to work in Langley Library again — a new position had opened up and she wanted a change. Plus she had finished cataloging all of the remaining shows.

The Archive has since left Pitt — when the Information Sciences Library closed in 2011, most of the materials were moved to the Fred M. Rogers Center at Saint Vincent College. A few materials do remain at Pitt’s Archives Service Center, including news coverage and promotional materials.

Although it's been a while since she last watched an episode in full, Scholnick plans on seeing “Won’t You Be My Neighbor,” the Fred Rogers documentary coming out on June 8. She cried when she saw the trailer. The documentary will be playing at the AMC Waterfront in Homestead and Manor Theatre in Squirrel Hill this weekend and will be open at more theaters across the state later in the summer.

She does wish that the Rogers Archive had stayed at Pitt, saying it was valuable for local researchers here.