A Growing Rivalry on Ice: Robert Morris vs. Penn State

Two teams that clearly don't like each other are vying for bragging rights for the state. 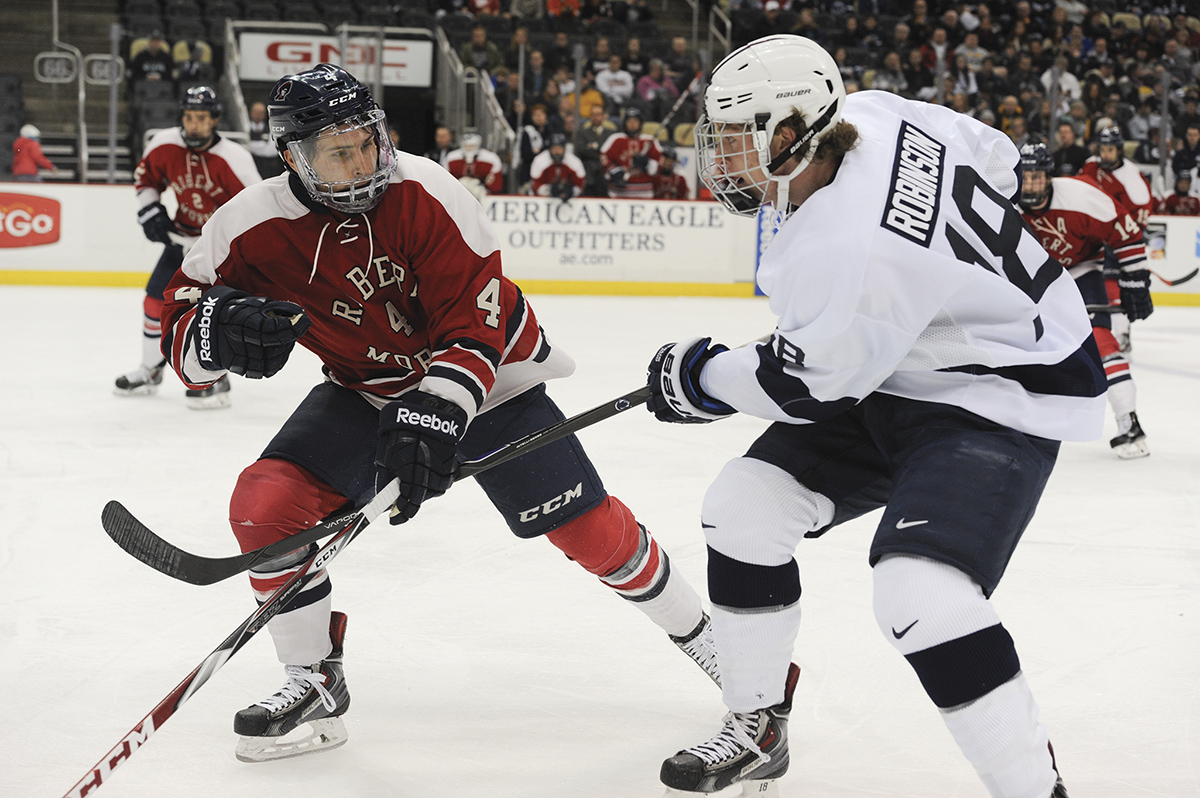 There have been only five meetings of the men’s hockey teams from Robert Morris and Penn State universities over the course of the last three seasons, but those showdowns have included enough animosity to inspire a rivalry. It’s not Boston College-Boston University or Michigan State-Michigan just yet — but it’s getting there in a hurry.

“To be honest, we don’t like Penn State,” RMU junior goaltender Terry Shafer acknowledged after backstopping the Colonials to a 4-2 victory over the Nittany Lions on Dec. 29 at Consol Energy Center in the semifinals of the third annual Three Rivers Classic. “That’s the way it is.”

So far, there have been no public utterances from the Nittany Lions regarding a similar contempt for the Colonials. In fact, Penn State head coach Guy Gadowsky was downright complimentary regarding Robert Morris before the December game at the home of the NHL’s Penguins.

That matchup was as much about celebration as it was confrontation, though, given circumstances that included the NCAA’s two newest Division I programs meeting as ranked teams for the first time.

Robert Morris, which played its first NCAA Division I season in 2004-05, arrived at that tournament with an overall record of 11-2-3 and ranked at No. 19 in the uscho.com Top 20 (a well-respected, in-season weekly assessment of college hockey’s perceived pecking order).

Last season, the Colonials went to the 16-team NCAA Tournament after winning the Atlantic Hockey Association playoff championship — a remarkable breakthrough for what then was a 10th-year program.

The Nittany Lions began playing in the newly formed, six-team Big Ten Conference last season. They intend to get where Robert Morris has been sooner rather than later.
“Robert Morris is doing a tremendous job,” Gadowsky says. “[The Colonials] are having a lot of success, and the more success they have, they bring more visibility to Pennsylvania hockey. And that’s something that we benefit from, as well.”

Games between the two schools always have been as anticipated as they are combative.

“A matchup with Penn State, that’s a big game,” Shafer maintains. “That’s one you circle on the calendar when the schedule comes out.”

It didn’t take long for the newfound rivalry to get serious — or physical. The two schools first crossed paths on Dec. 15, 2012, in front of 1,300 fans at Penn State’s Greenberg Ice Pavilion. Robert Morris prevailed, 3-2, in a game that saw a combined 16 penalties assessed, including each team getting the whistle for slashing, boarding and unsportsmanlike conduct. 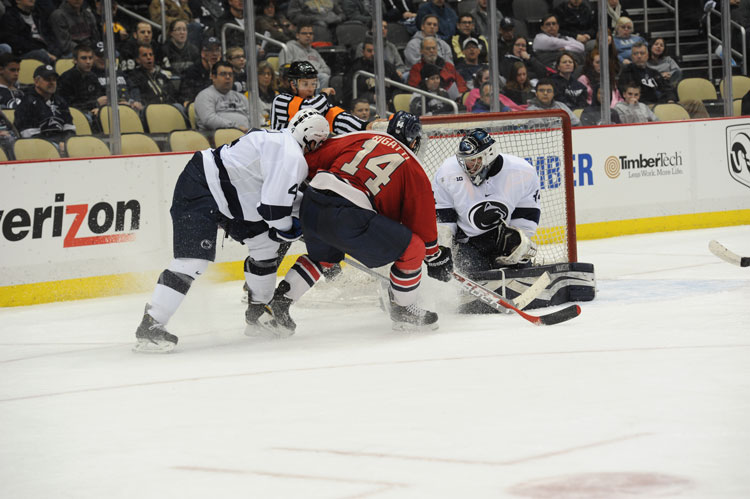 They played again 13 days later in the inaugural Three Rivers Classic. Robert Morris won, 6-0, in a game that lacked drama on the scoreboard but not mutual contempt in the corners. The penalty sheet this time featured David Glen of the Nittany Lions earning a five-minute major for contact to the head of an opponent and an accompanying game-misconduct penalty and Penn State’s Connor Varley earning a two-minute boarding call with 22 seconds remaining.

Varley might have been responding to the Colonials’ Greg Gibson (charging) and Matt Cope (boarding) taking perceived liberties by committing tough-guy infractions in the third period, with Robert Morris leading 5-0.

Penn State’s two wins over Robert Morris last season featured the same sticks-up, blood-up, never-give-an-inch intensity that characterized the teams’ earlier meetings.
These duels, it seems, always include after-the-whistle physical and verbal exchanges (“chirping” is how the latter is referenced in hockey circles).

This year at the Classic, it was the Nittany Lions’ Nate Jensen getting a five-minute major and a game-misconduct for an elbow to the head of the Colonials’ David Rigatti.
Only four players on either roster have western Pennsylvania ties. On the RMU side, Zac Lynch is from Shaler and Rigatti from Peters Township. For Penn State, goalie Matthew Skoff is from McKees Rocks and winger Tommy Olczyk (the son of former Pittsburgh Penguins player, broadcaster and head coach Eddie Olczyk) attended Chartiers Valley High School.

But even Shafer, a native of Penfield, N.Y., understands what’s at stake.

“I think it’s about bragging rights for the state,” he says.

Penn State has begun to turn “Happy Valley” into a hockey hotbed, thanks to a $102 million donation from Terry Pegula (Class of ’73) and his wife, Kim, to fund the men’s and women’s teams and the 5,782-seat Pegula Ice Arena, a college hockey palace that replaced Greenberg as the home of the Nittany Lions beginning with the 2013-14 season. Penn State had played a handful of varsity hockey games from 1940-41 through 1943-44 and three more in 1946-47.

Robert Morris had no such benefactor and no such international brand as it relates to intercollegiate athletics. Head coach Derek Schooley was hired the year before RMU’s first varsity season. He initially worked from an office that had a desk, a chair and a phone but no computer. He once had a recruit turn him down and then end the call with a polite and sincere “thank you anyway, Mr. Morris.”

“You develop rivalries with teams that are in your vicinity,” is as far as Schooley goes in confirming the ill will. “Penn State is in our vicinity and one of three Division I teams in our state [along with Atlantic Hockey Association rival Mercyhurst in Erie], so it’s considered a rivalry game.”

This article appears in the February 2015 issue of Pittsburgh Magazine.
Categories: From the Magazine, Hot Reads, Sports