Filled with original details, the six-bedroom, Tudor-style home has only changed hands once in the last century. 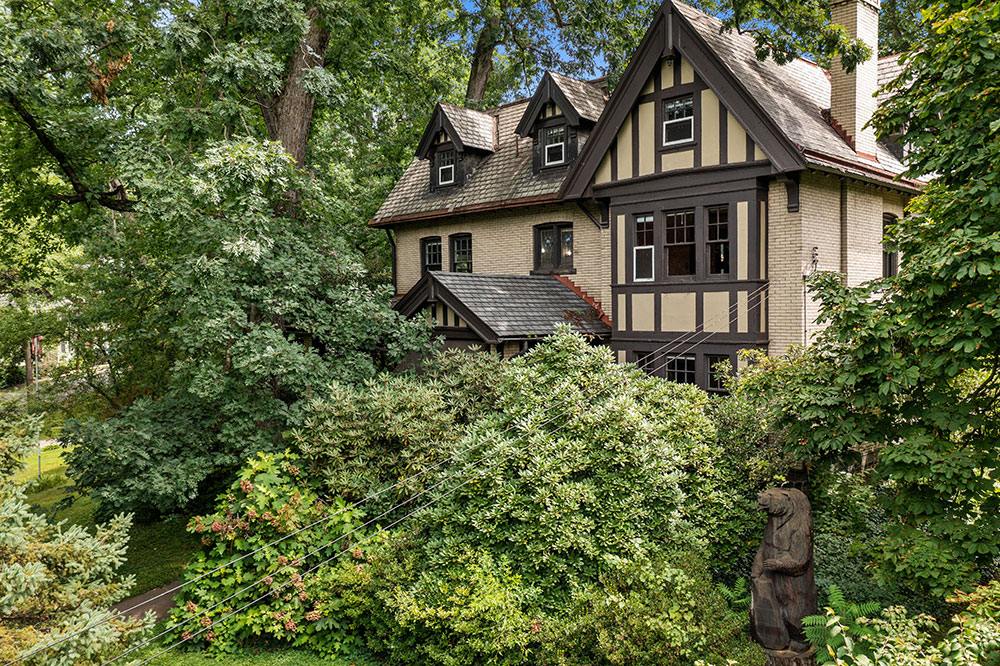 Occasionally, a grand old house defies the odds and retains its original glory. Such is the case with 7190 Brighton Road in Ben Avon, a home that only has changed hands once since it was built more than 100 years ago. 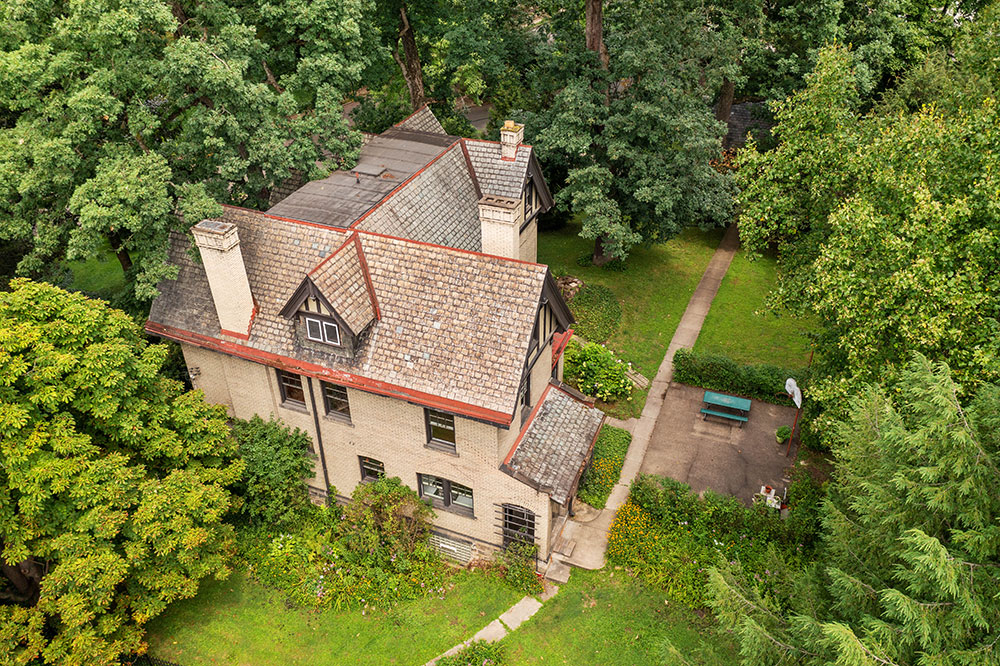 Owned for 64 years of those years by the late George and Ruth Trent, the large Tudor-style home is one of most prominent properties in the neighborhood. Built in 1914, it is in near-original condition, with several stained and leaded glass windows, the original oak floors and walnut millwork throughout.

When the Trents purchased it in October of 1958, the original owners had lived there for 44 years. After moving in, George and Ruth put the spacious six-bedroom house to good use, filling it with seven children. George died in 2016; Ruth was able to stay in the home with the help of her daughter, Pittsburgh Post-Gazette food editor Gretchen McKay (and her husband Peter) — who lived just around the corner — until June, when she died at age 93. 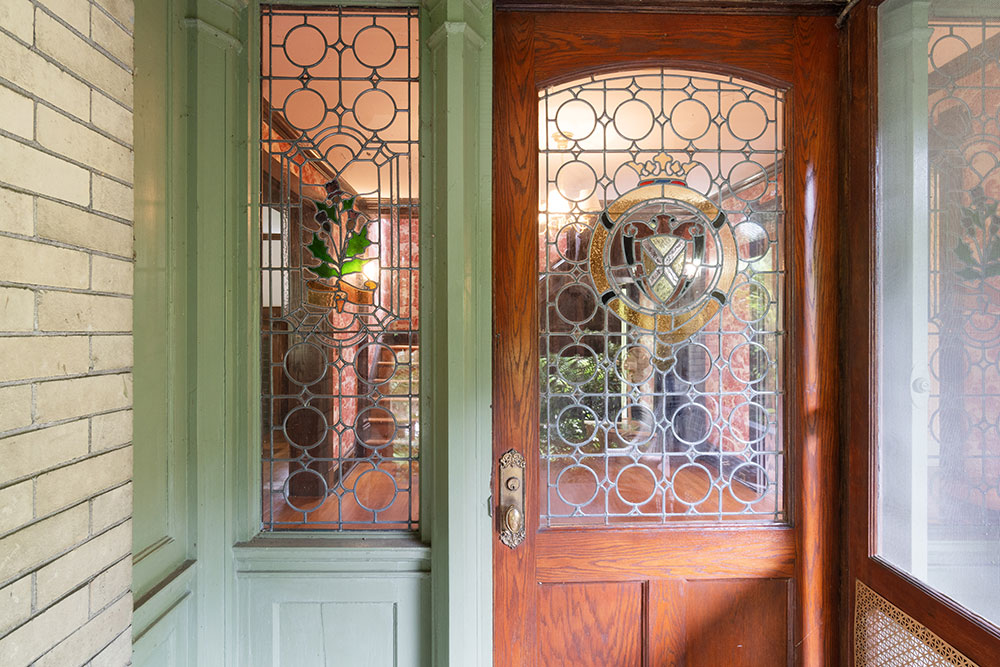 McKay has many fond memories of the home.

“It’s right on top of the hill from the old train station that used to go into Pittsburgh,”  she says. “There are a lot of mature trees and two tree wells; one was carved into a huge bear. There are a lot of old planting beds. My mother used to love to garden.” 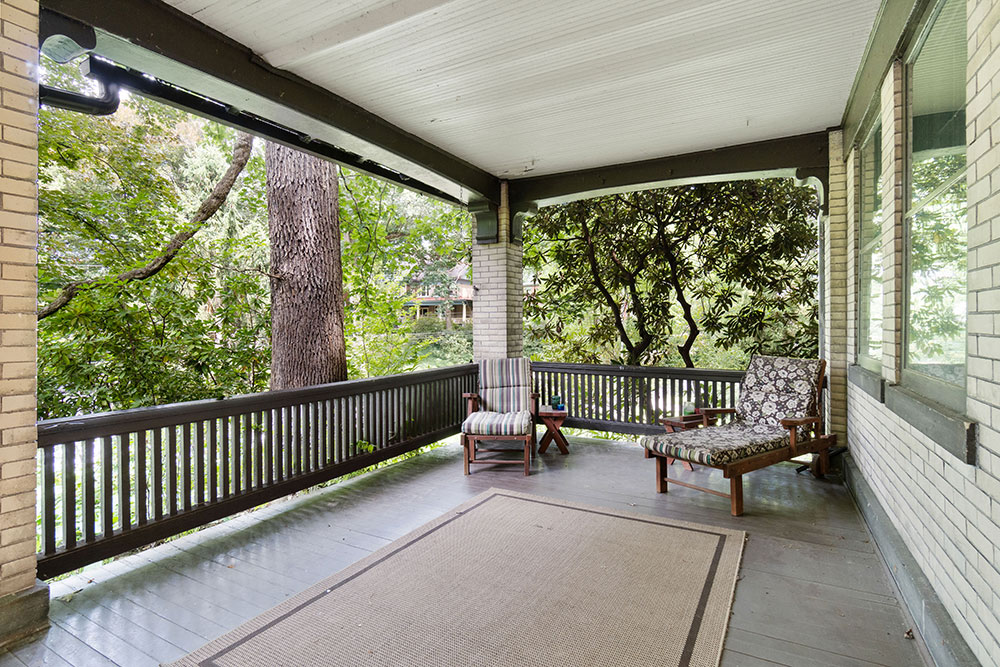 Tucked away from the street, the brick home has stucco Tudor details and a slate roof. A long walkway leads to the front porch, where the original beams, corbels and millwork are painted a deep brown. It’s the perfect place for gatherings, especially because the house is on the borough’s parade route.

“The Memorial Day parade goes past the house every year,” McKay says. 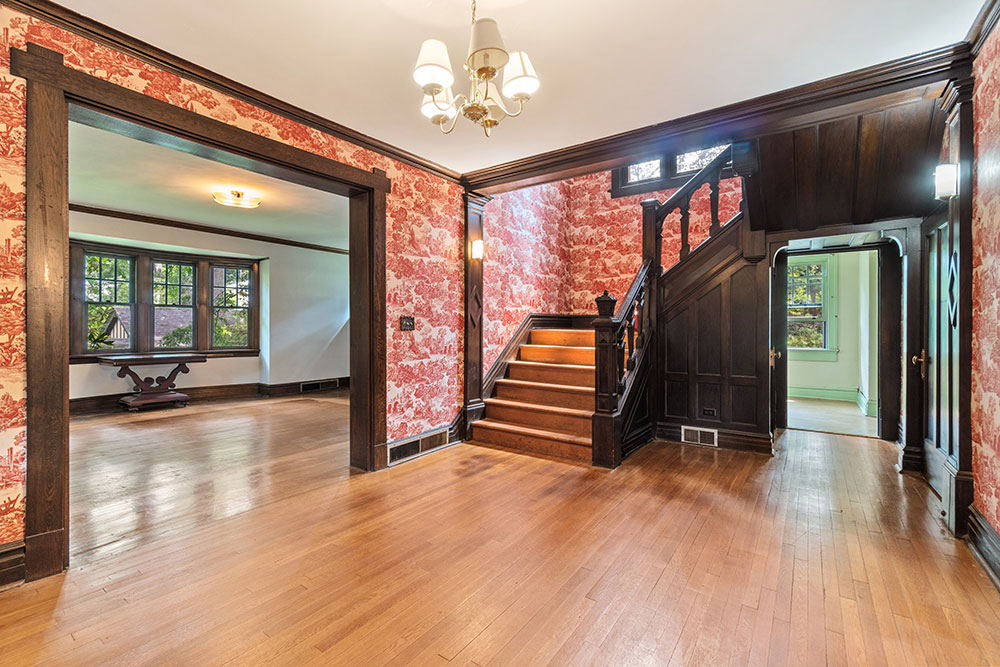 The entry is marked by a huge, three-panel walnut door with leaded glass and sidelights. Once inside, the 18-by-12-square-foot entry is a step back in time, thanks to all the original details — the only exception being the red toile wallpaper that was hung in 1969.

“It was installed by my dad for my sister’s graduation party,” McKay recalls.

It fits perfectly with all of the entry’s fine millwork and grand staircase, a favorite spot for the Trents’ holiday decor.

“We always chopped down our Christmas trees when we were young, and there were years that the tree went all the way to the rail on the second floor,” McKay says. “It would fill that entire space. Because there were seven kids, you could not even walk into the breakfast room, it was so full of presents.” 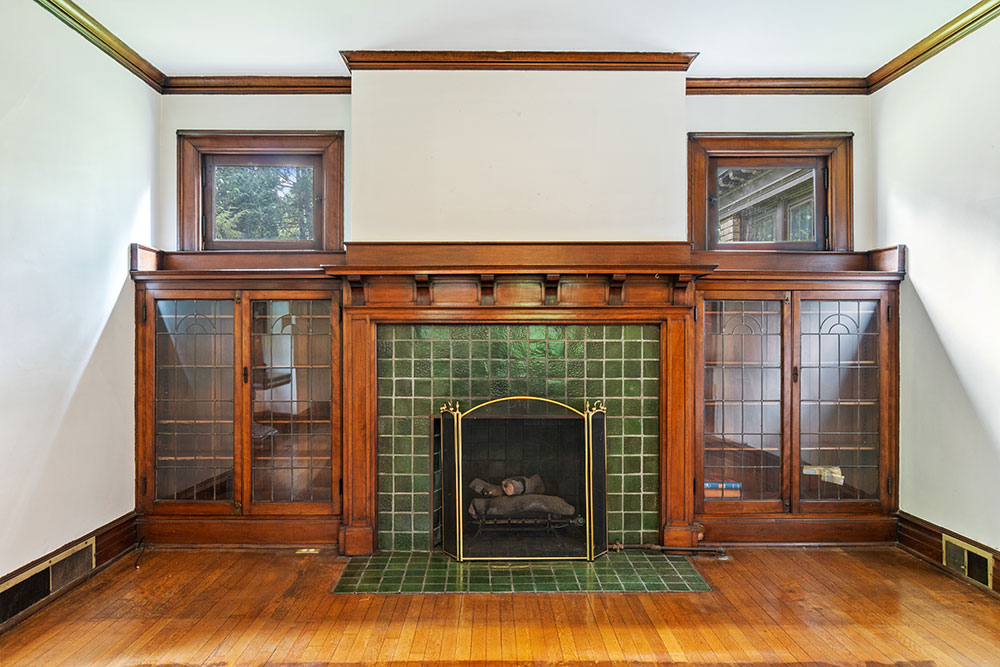 The home has five fireplaces, including in the 23-by-14-square-foot living room, where it is flanked by a pair of built-in bookcases with leaded glass doors. A green tile façade sets off the room’s natural walnut, as does a bay of windows that floods the room with natural light. 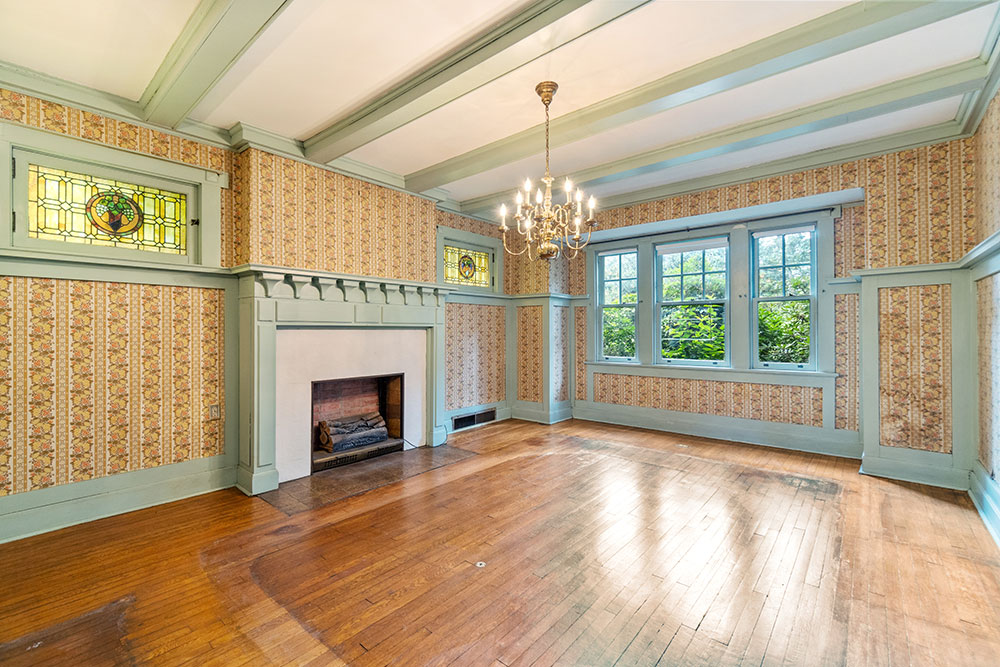 The scene of many family dinners, the 18-by-13-square-foot dining room still has the original wallpaper, with the wooden trim painted a fresh green to pull out the pattern. There’s also a box-beam ceiling, two stained glass windows and a brass chandelier.

“[My parents] hosted holiday dinners well into their late 60s,” McKay says. “They had a large table; we would squeeze 16 people around the table. All of the kids would be on card tables in the entry hall.”

Next to the kitchen, a 15-by-6-square-foot butler’s pantry is a storage lover’s dream, featuring floor-to-ceiling walnut cabinetry and, at the far end, a double-hung window. It also houses a rear staircase that leads to the second floor. 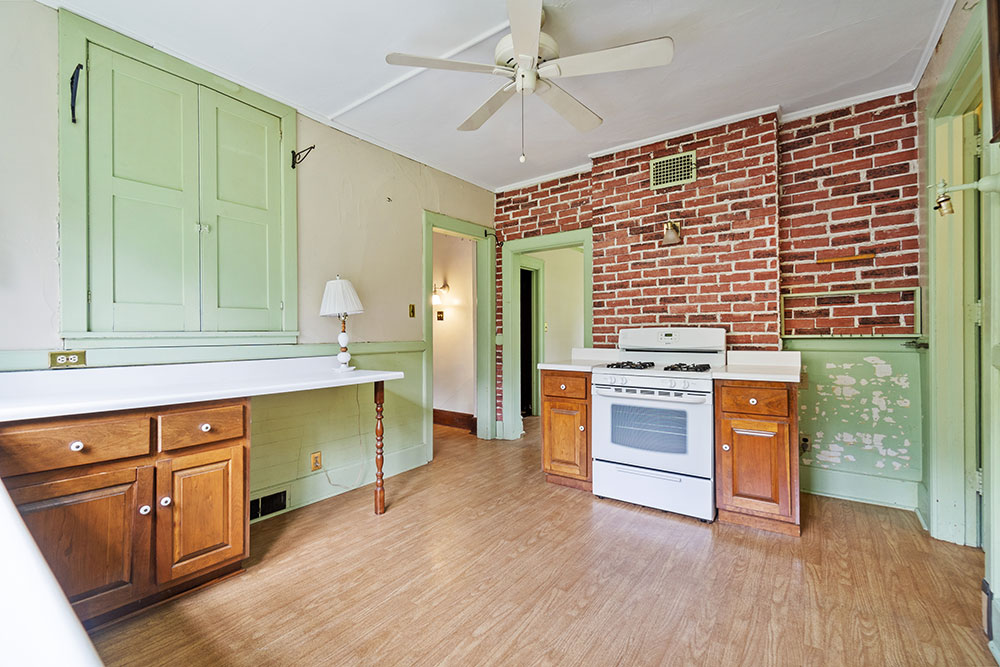 In the adjacent 14-by-11-square-foot kitchen, spare and efficient is the name of the game. The space has a basic range, formica countertops and wood cabinets, plus a 12-by-9-square-foot breakfast room where the family ate their everyday meals. Two walls of double-hung windows give the kitchen a nice view of the property.

McKay notes the never-remodeled kitchen needs to be updated. And while her mother did not enjoy cooking, McKay says she did like to bake.

“We made a lot of cookies in that kitchen,” she says. 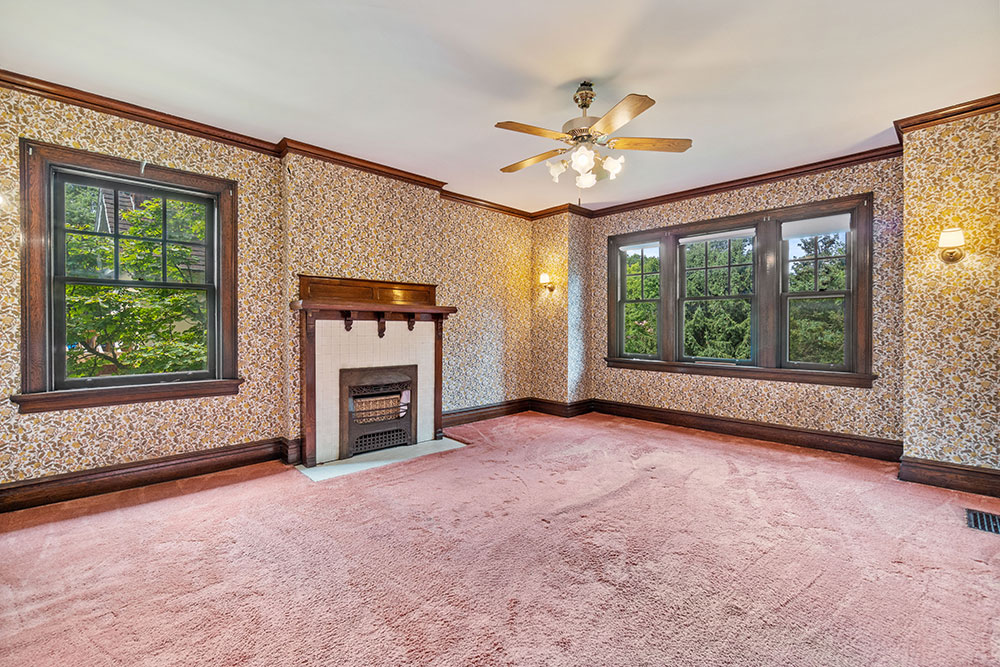 On the second floor are three bedrooms and one very large bathroom.

Featuring hardwood floors underneath the carpet, the primary bedroom takes up a whopping 25-by-15 square feet and has a fireplace outfitted with white porcelain tile with a walnut wood mantel. The other wallpapered bedrooms are 18-by-14 square feet and 14-by-12 square feet, respectively. All three rooms have very large closets and plenty of windows. There also are wall sconces in addition to the overhead lighting in each room. 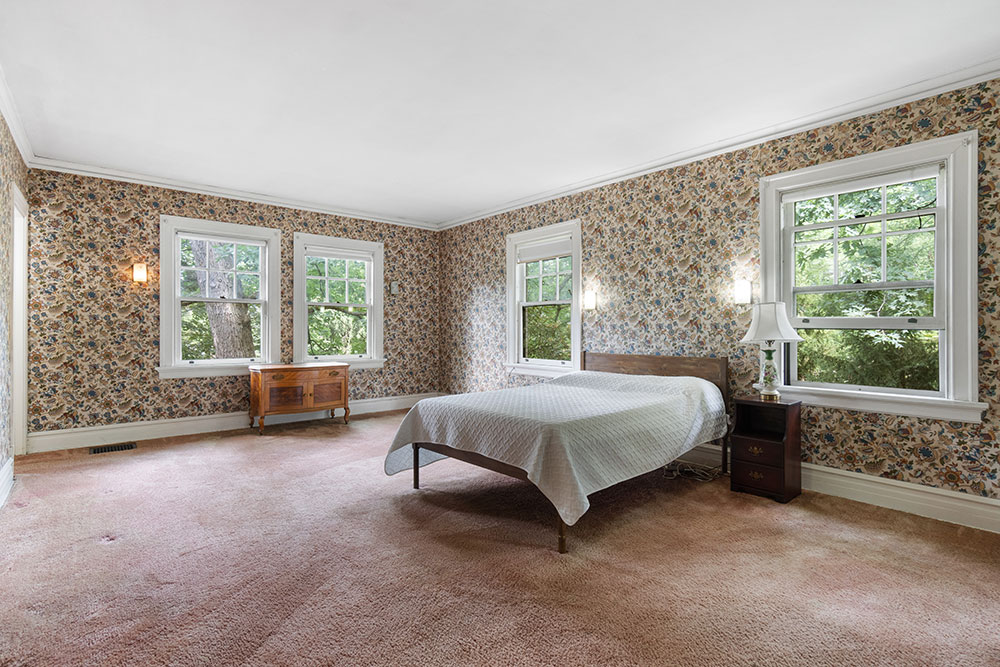 The bathroom has white subway tile walls accented by wallpaper, as well as a bathtub, separate shower, ceramic tile floor and a two-bowl vanity sink. There is more than enough space to update it into a modern space without breaking through walls, which is very unusual in an old house. 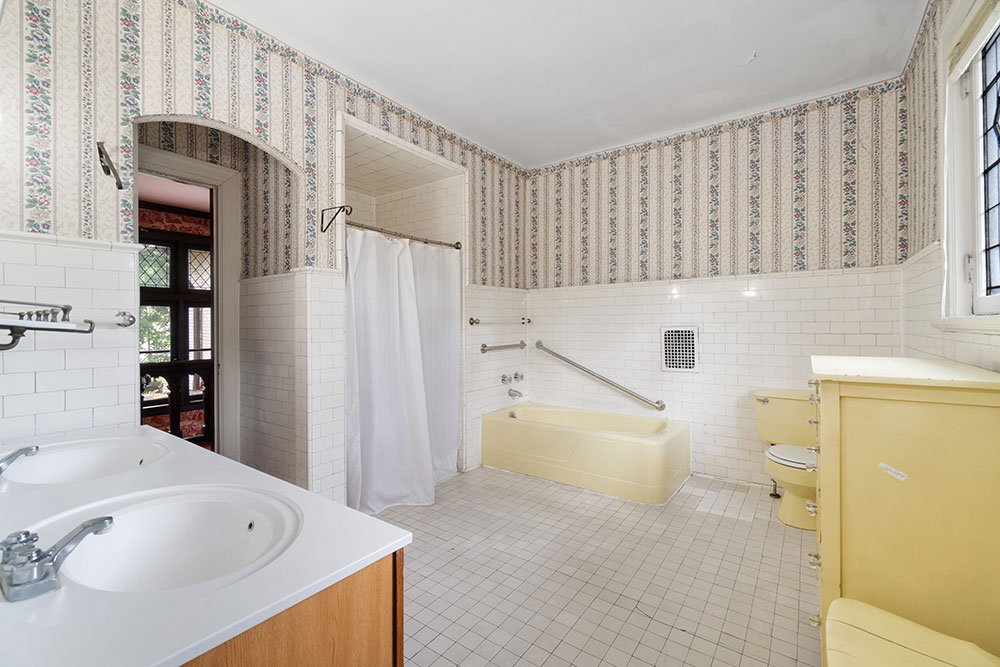 The third floor features three more large bedrooms with hardwood floors and another bathroom with a shower/tub combination and a single vanity sink.

“My three brothers were in the giant room on the third floor,” McKay says, noting the previous owners had live-in help who lived on the top floor. 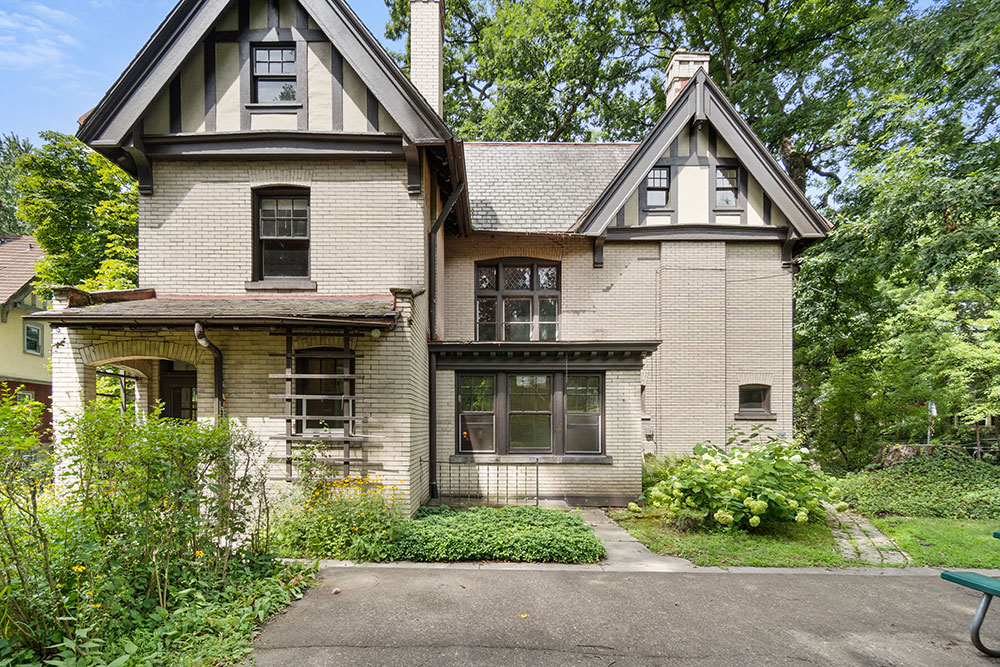 The home has a typical Pittsburgh basement, but also includes a root cellar, laundry space and a workshop.

“When my father retired, he took up the hobby of making Windsor chairs,” McKay says. “He would steam the wood out on the basketball court; he became very known for his work.”

Speaking of the basketball court, McKays says the Trents would use it year-round, not just in the warmer months.

“Every winter my father would freeze it with water and my brothers would play hockey on it,” McKay says. “It is where I learned to ice skate.” 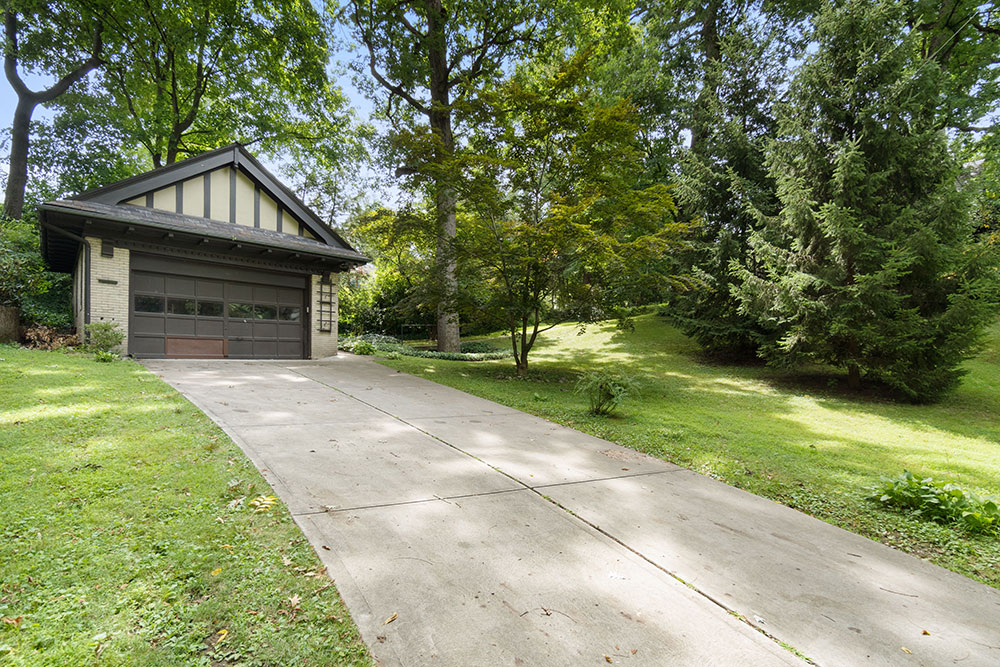 The home also has a two-car garage with a large room above it that was used as a playroom. McKay believes the room once was used as living quarters for the previous owners’ chauffeur.

The Trent family also lived there long enough to witness significant development when the property behind their home was torn down.

“It was the Dean family’s estate,” McKay says. “I saw the borough tear it down in the late ‘60s and put in a cul-de-sac with all modern houses.”

While McKay says her family is sad to sell the house that holds such a rich history for them, their hope is a new family will create their own memories there — and love it just as much as they did.

“Everybody in my family just wants the house to go to another family,” she says. “It needs people. It needs to be brought back to life with kids and activity.”

About: Ben Avon Borough (benavon.com)
Population: 1,918
Planes, Trains & Automobiles: A 20-minute commute to the airport. Bus transportation on the borough’s main line. Some street parking.
Schools:  Avonworth School District (avonworth.k12.pa.us)
Neighborhoods: Tucked up on a hill, Ben Avon is a tiny borough that occupies just under a half-square mile along the Ohio River. Located 6 miles northwest of Downtown, it has easy access to interstates 79 and 279, making it a prime location. Incorporated in 1892, Ben Avon was laid out with only 28 streets;  only a few streets have been added since then, making it one of the smallest boroughs in the commonwealth.