A Flash Mob for the Almost Forgotten

I attended the Court Appointed Special Advocates (CASA) Rally for the Children on the steps of the City County building, where dozens and dozens of supportive 'Burghers danced to the infectious beat of Katy Perry's "Firework" under the watchful eye of Mayor Caligiuri's statue. 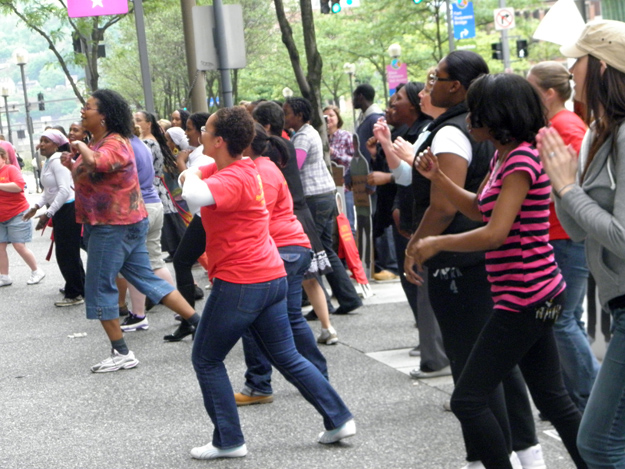 The participants in yesterday’s CASA Rally for the Children flash mob aren’t shy. At all.

Yesterday I attended the Court Appointed Special Advocates (CASA) Rally for the Children on the steps of the City County building where dozens and dozens of supportive Burghers danced to the infectious beat of Katy Perry’s "Firework" under the watchful eye of Mayor Caligiuri’s statue.

The rally was timed to coincide with the national Forgotten Child Campaign and was designed to bring awareness to the plight of abused and neglected children, those same children that CASA serves as advocates for as the youth traverse the oftentimes uncertain path of foster care.

While the dancers, under the direction of ‘Burgher extraordinaire Dr. Goddess, used their bodies to say that every foster child has a worth and a bright future if we, the community, step in where their parents failed, other volunteers held up cutouts of children holding emotional messages.

I grabbed some video of the dance—regular ‘Burghers, like you and me, not trained dancers, simply willing to step out and manifest their commitment to not forgetting the children in foster care. I’m particularly in love with the brave guy on the end of the dancing line, who seems to be swimming in a sea of women, and who doesn’t seem to care. He’s just dancing.

I guess the point is to not watch the dance and then walk away, but watch the dance, feel the emotion, remember the kids, and then see how you can maybe pitch in. There’s a lot of ways to help CASA.

Maybe you’ll dance with them next time. They asked me, but I said, "Have you ever heard the phrase ‘bull in a china shop?’"

This article appears in the May 2011 issue of PittGirl.
Categories: PittGirl