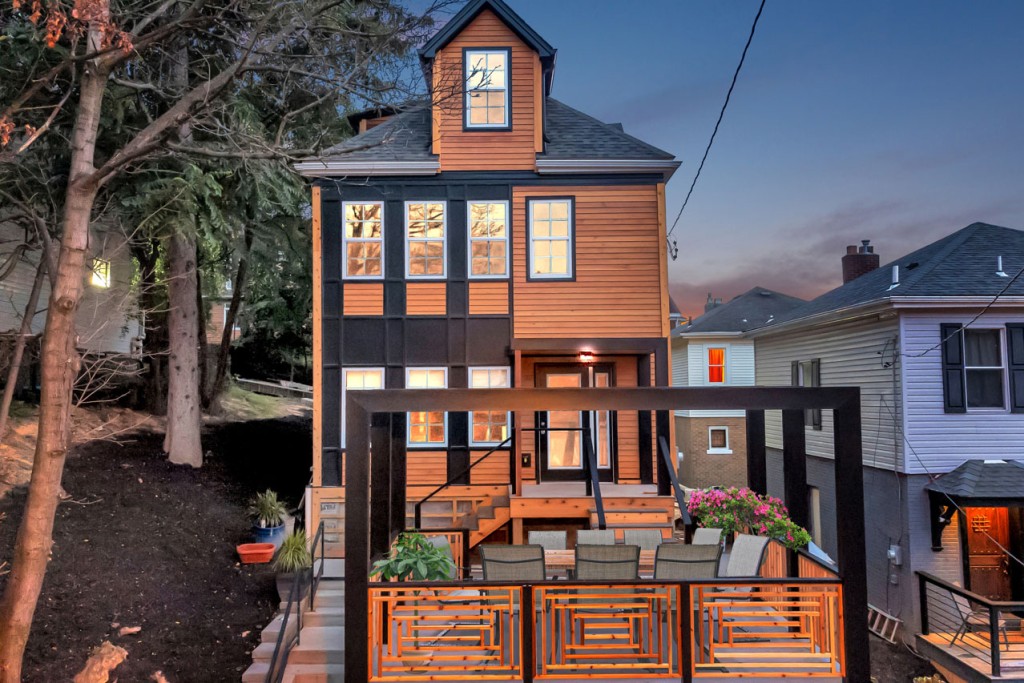 Sometimes a thorn in the side can become a rose — enhancing everything around it.

Take for instance, the beauty that has grown from 404 Eureka St.

When Godmother Properties took over the Mount Washington home in 2018, it appeared ready for foreclosure. The two-story home had white vinyl siding that had turned to gray and in front was a street-level garage with rickety wooden doors. Inside, the 110-year-old home’s former beauty had been lost to years of neglect. 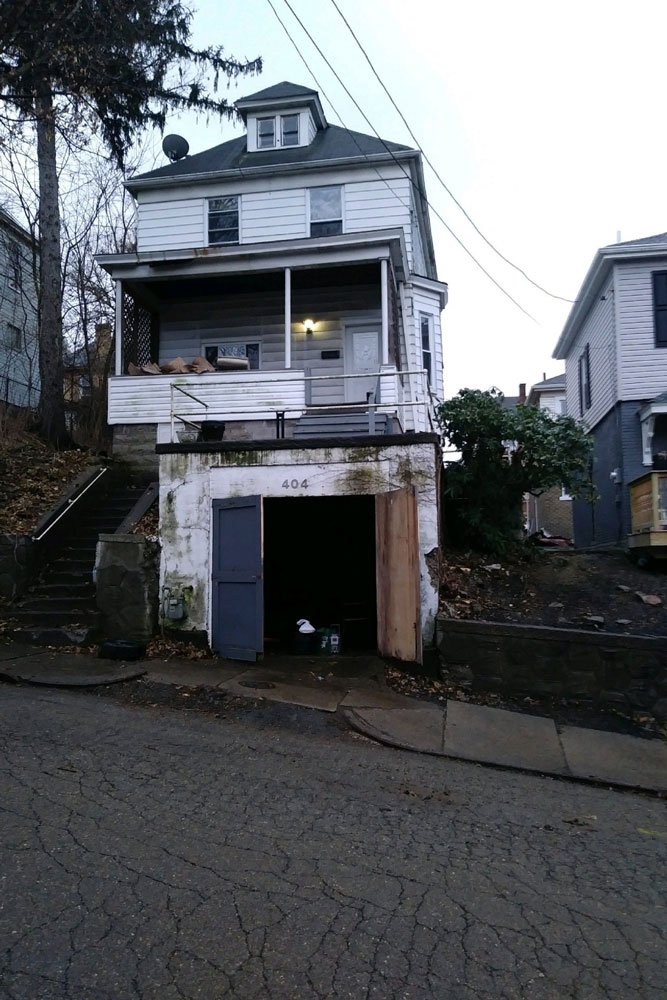 The owner of Godmother Properties (who asked to remain anonymous) designs and oversees construction of her projects. Her latest one, featuring modern, high-end design, is a short walk from Grandview Park overlooking Downtown’s skyline. Listed for $625,000 (#1576082, Nila Porter, Berkshire Hathaway, The Preferred Realty, thepreferredrealty.com), it is open by appointment.

The fairytale story begins when the owner of Godmother says she found the four-bedroom, 3½-bathroom house by accident.

“The first house I ever bought was brought on foreclosure; my intent was to renovate that and rent it,” she says. “It just so happened that both neighbors on each side saw what I did to the corner house and they wanted out of their homes and I bought those as well.” 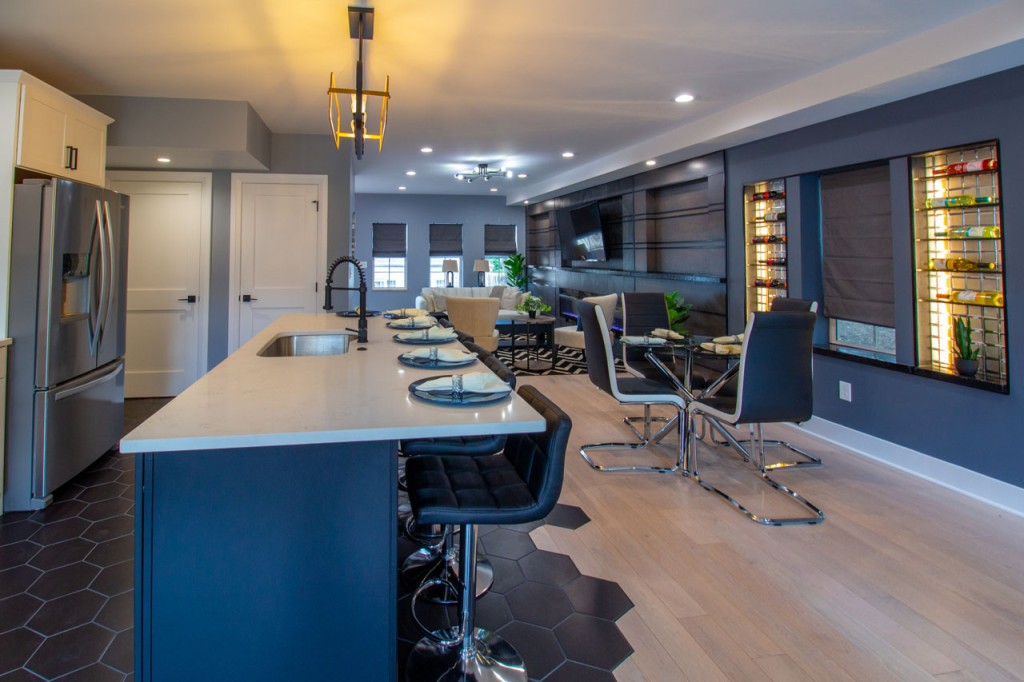 The home makes a striking first impression, thanks to new cedar planking against a dramatic black background.

Cedar also features heavily in the modern, European-inspired pergola the owner designed over the new outdoor space. It has black-metal posts, a graphic, cedar wood insert fence and cedar wood inserts on the ceiling to diffuse light. The one-car garage has also since been upgraded to a lovely structure with tons of street appeal.

“I fell in love with cedar,” the owner says. 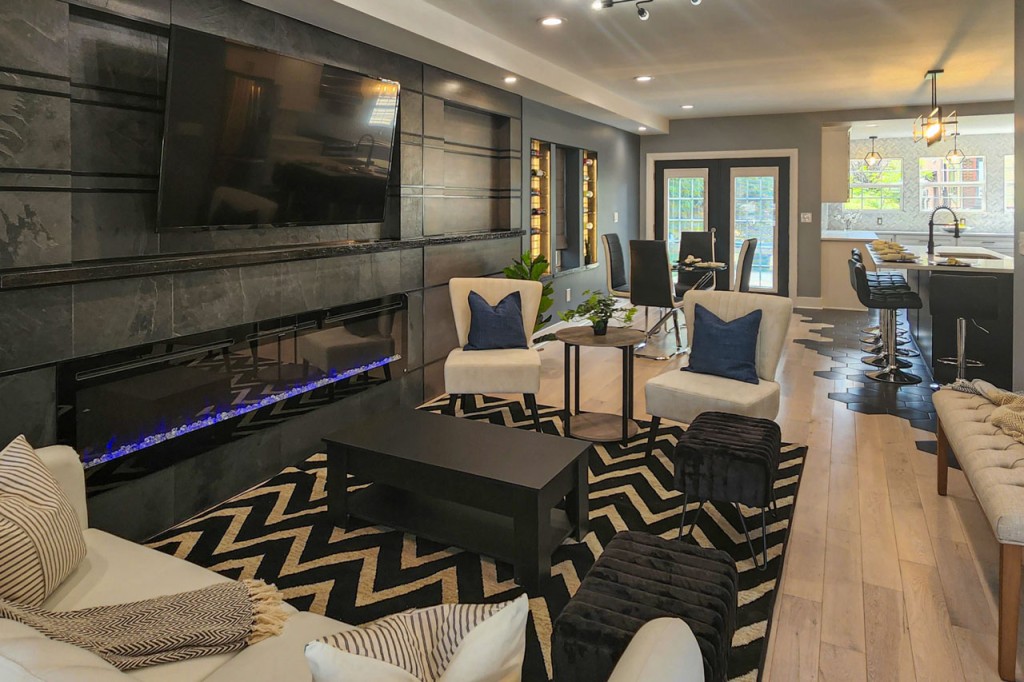 Inside, the house was gutted and a new, modern open-floor plan was installed. The living room has a fireplace wall finished in slate, tile and finished plywood. The ledge is a poured polished concrete.

“The contractor helped me integrate art niches on each side of the fireplace,” the owner says.

The home’s new hardwood floors morph into black octagonal tile as they travel into the kitchen. A large kitchen island with quartz countertops seats six under a linear chandelier. 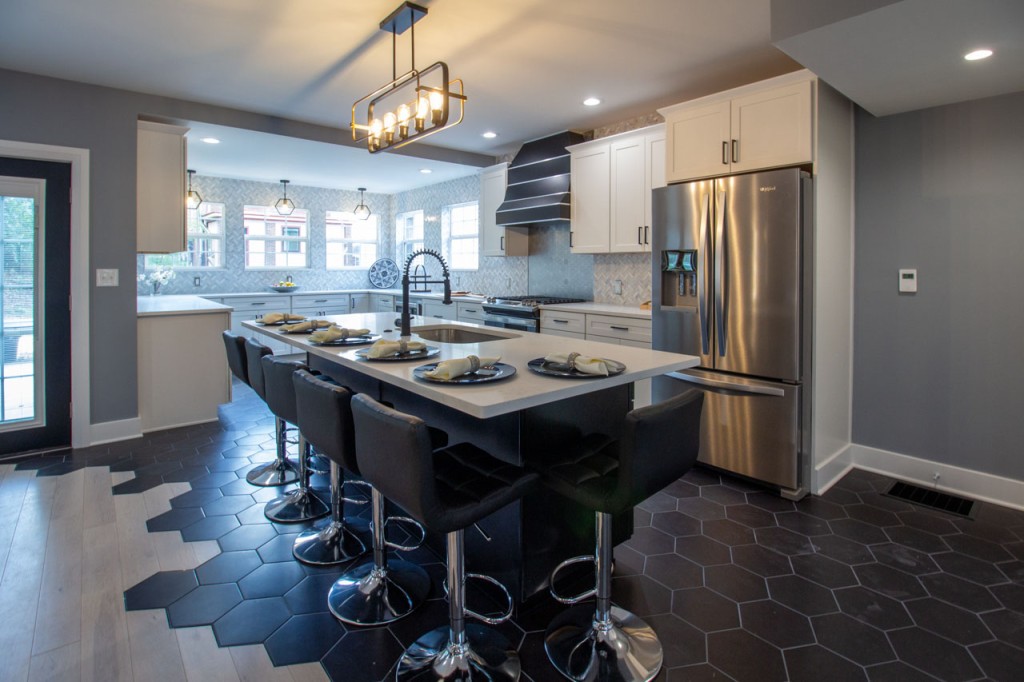 Opposite the island, the dining area features a built-in shadowbox wine bar with custom lighting.

“I do a lot of online research; that inspiration came from an actual wine rack that was sold online,” the owner says. “The contractors were very intuitive and brought my design to fruition when they added the lighting and the bars to hold the wine bottles. Wine refrigerator was integrated into the kitchen cabinets.”

The owner also turned a back porch formerly used as a laundry room into an extension of the kitchen. The new addition is similar to an open butler’s pantry, but with a bank of windows. Adding to its appeal is contemporary lighting and custom shelving in addition to room for prepping, serving and storage. 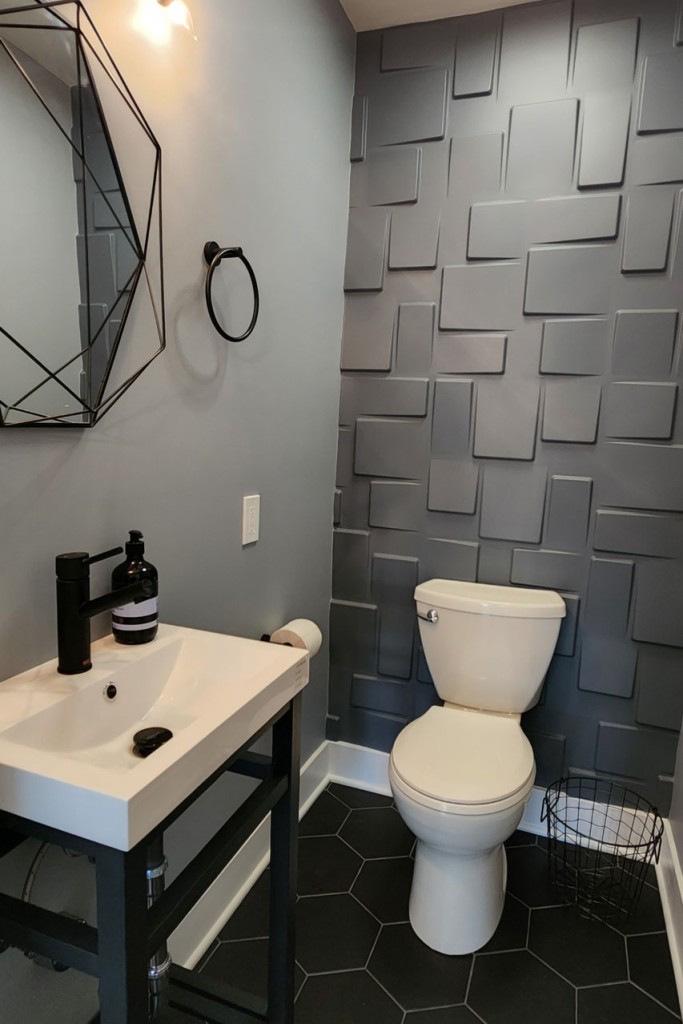 A pair of French doors lead to the flat outdoor space. The first floor also houses a powder room with gray geometric panels.

“I am a geometric girl as you can tell,” the owner says. “They were the best panels to install that hides the seams.”

“They are very unusual; there are three flights of hand-cut butcher block wood for the treads,” the owner says. “All of the handrails are custom as well.” 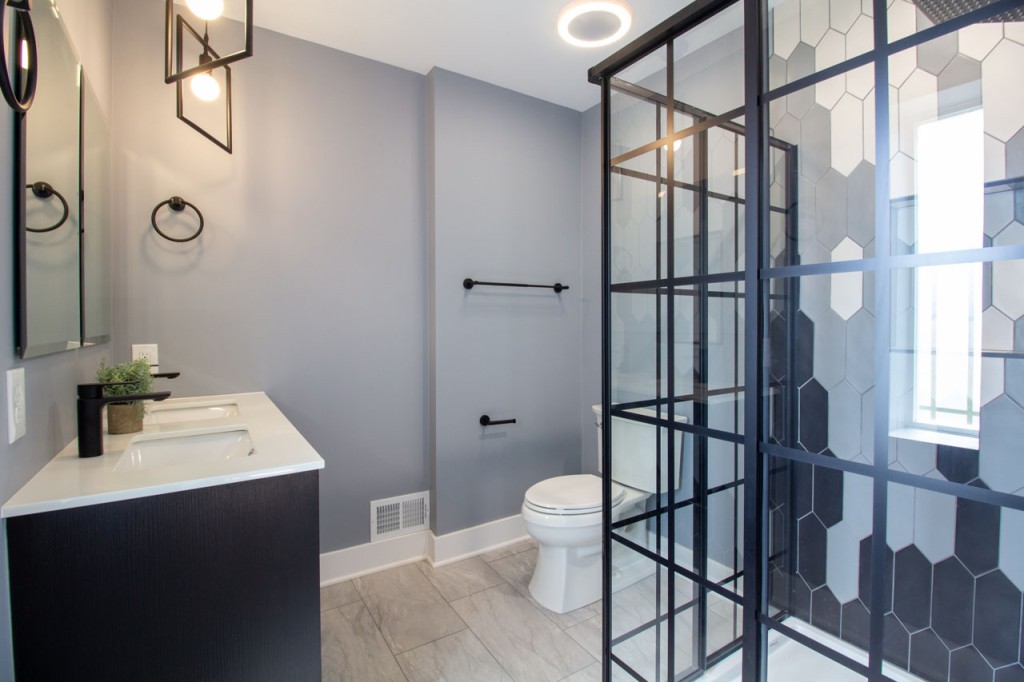 In the primary bathroom is a geometric diagonal tile layout complemented by eye-catching black finishes.

The drama continues in the second bedroom and bathroom, where there’s a sliding glass shower door with a black grid. The bedroom has a board-and-batten arrow design painted in charcoal gray.

“This house was done by one of my best crews. The high level of craftsmanship is absolutely amazing,” the owner says. “The crew, Trademark Designs, they are artists.” 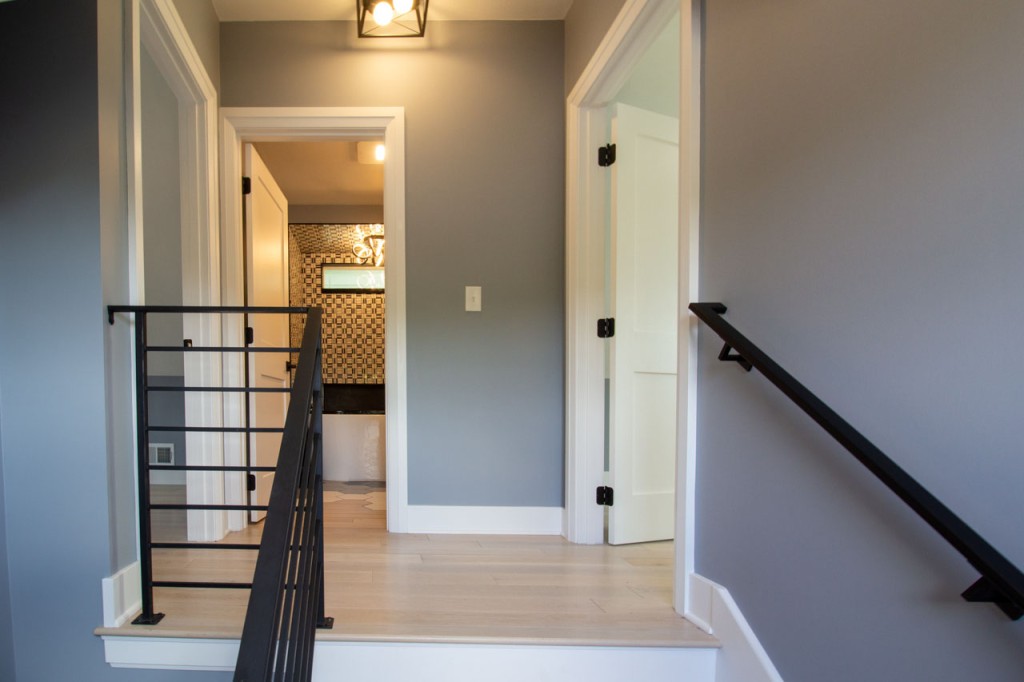 The newly reconfigured third floor also got a Cinderella-worthy glow up.

“The third floor did not exist,” the owner says. “It was split and we created a dormer to add the bathroom.” 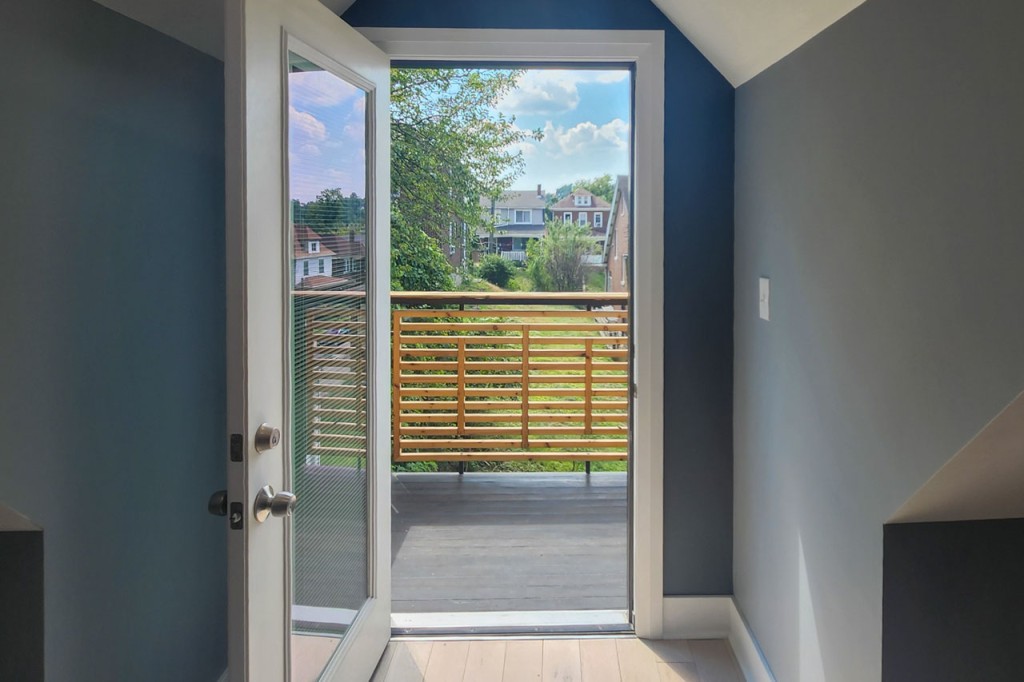 The home’s new owner will also have the opportunity to buy the lot next to the house, which is for sale through the City of Pittsburgh’s Side Yard Sale program.

Since its renovation, the house has become a keystone property in the immediate area, spurring renovation by other homeowners who were inspired to make their own properties better, according to the owner.

“The neighbors are in amazement; they could not believe that we would do a house of that magnitude in that area,” she says. “They are taking a lot of my design ideas and putting them into their own homes. It is such a great thing to see.”

About: Mount  Washington
Population: 14,567
Planes, Trains & Automobiles: A 20-minute commute to the airport. Daily transport via Pittsburgh Regional Transit, including two historic inclines. Street parking.
Schools: City of Pittsburgh (pghschools.org)
Neighborhood: Perched 367 feet above the river bank with a commanding view of Downtown’s skyline, Mount Washington has been named in the top three city views worldwide. Overlooks, inclines and a panorama that reaches from all points to the apex of the city and the head of the Ohio River draws wonders to visitors who trek up. Grandview Avenue is filled with cliffside restaurants, including Altius and LeMont, while St. Mary on the Mount Church keeps a watchful eye on the city below.