A College Mind Happily Living in a Fourth Grader's Body

This Monroeville youngster, not yet 5-feet tall, has a 4.0 GPA in three college-level classes this semester. 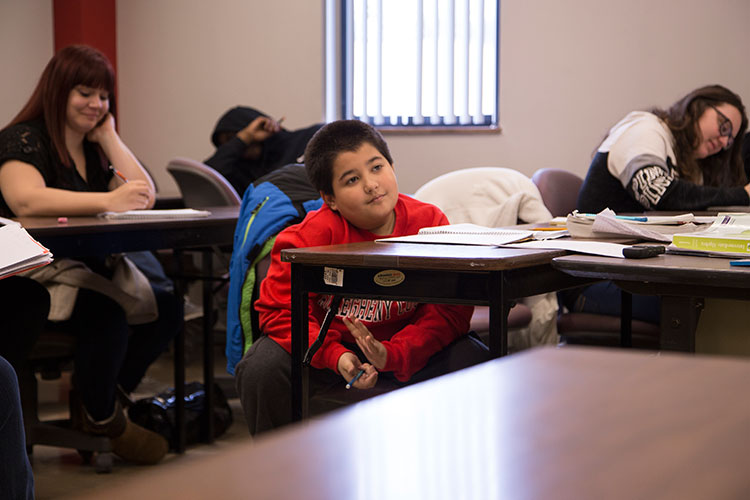 RJ Krishnaswamy, 9, squirms in his seat at the Community College of Allegheny County, his pencil sharpened, his algebra notebook open, his brain on overdrive.

Classmates towering over him drift into the class at the Boyce Campus in Monroeville. They banter back and forth while the boy writes a XXVII on his notebook page. That denotes the 27th day of this Intermediate Algebra class — his own system for staying organized and making every day of college count.

A few rows back, his 22-year-old classmate Angel Vaughn quips, “He an overachiever. I can barely get myself out of bed at 7 a.m.”

Even so, she’s fond of the 4’ 6” classmate, who she always is well-behaved. 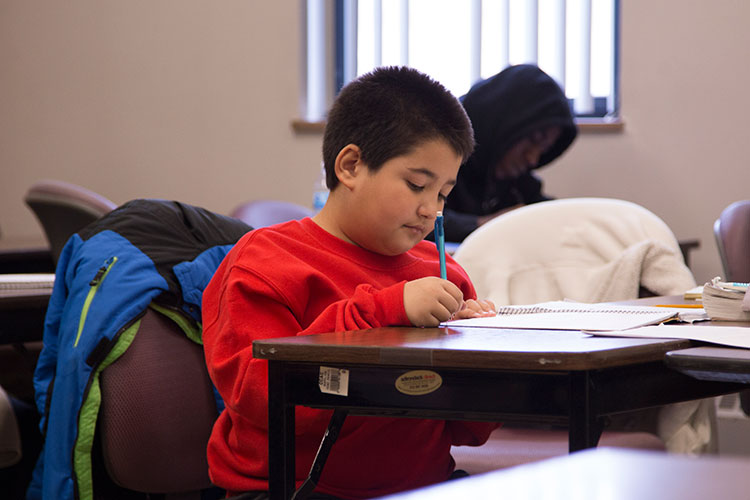 RJ has been homeschooled in Monroeville since he began kindergarten, when he got bored within the first five months. Though his peers by age are in fourth grade, homeschooling has allowed RJ to excel. He begged his parents to let him take college courses that would challenge him even beyond his online middle school classes.

Singing the alphabet at eight months, reading signs at age 2 and Harry Potter at age 3, RJ always has done things at an accelerated pace. But college? His parents, Maria and Raja, were wary at first.

What if older kids resented him? What if he pushed himself too hard?

“Momma, please, I want to do this,” he begged his mother.

His parents relented, and he took his first college course, a computer science class, in July 2016. He liked the college classroom so much that he enrolled in three courses, for 11 credits, this semester. His GPA: 4.00.  He’s on track to be the youngest member of the campus chapter of Phi Theta Kappa — the prestigious honor society for two-year college students — says Linda Newbauer, a CCAC student development specialist. 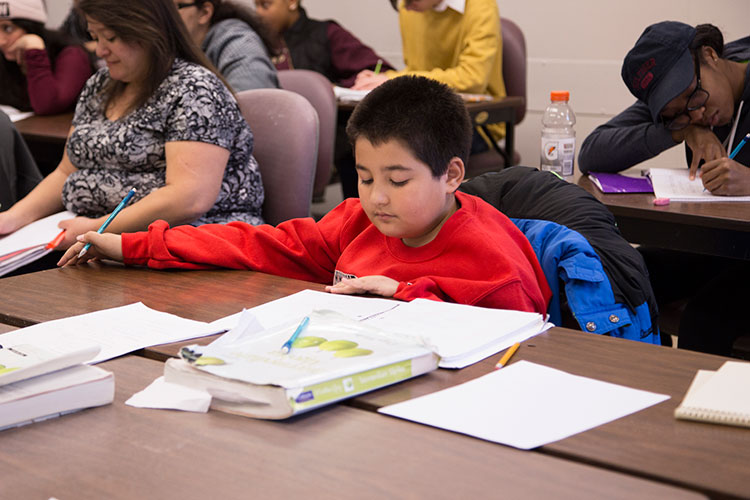 RJ says he wants to be a software programmer like his dad, and he loves studying — sometimes he even works ahead. Despite his big dreams and determination, the biggest challenge of college for RJ is more typical of 9-year-old boys: sitting still. His mother Maria, who sits next to him in class, occasionally nudging him if he wiggles a lot.

One recent day, he gets to the campus early and finds an empty algebra classroom where he sets up his laptop for cyber-school English class on Alice in Wonderland.  He is taking college courses at the same time he takes middle school classes through Agora Cyber Charter School.

A few minutes before 10 a.m., he stops reading the childhood classic, snaps shut his laptop and switches gears to college math. As Professor Paul Gogniat goes over rational expressions, RJ waves his hand to answer a question about lowest common denominator. Gogniat likes the enthusiasm his youngest pupil brings to the class. “He works very hard. He’s the nicest little kid.”

After class, RJ goes to the cafeteria and eats French fries before switching gears for his middle school science class. He hums as he walks down the hallway, drawing a few double takes from those who have not yet seen the young student.

Instead of taking a break outside in the playground, he plays goofy games in the office of David DeVenzio, student development specialist. 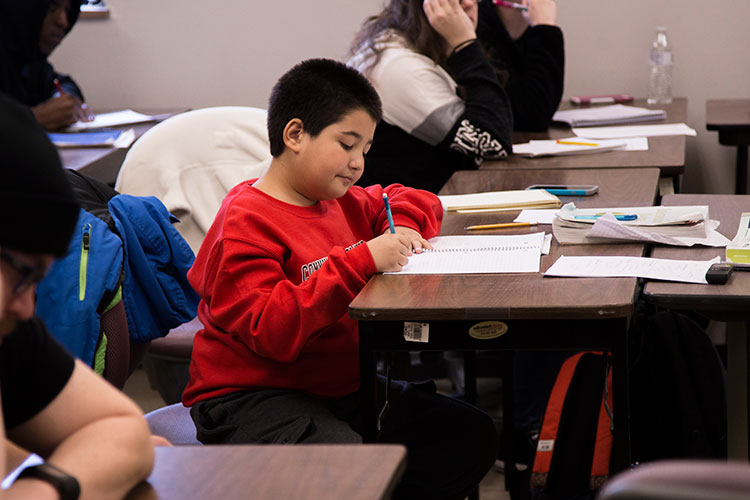 RJ tells him he got an A on his math test, and DeVenzio lights up a day-go lamp — the A lamp. “We didn’t get to use the A lamp much until RJ started coming in,” DeVenzio says.

A few basketball players file in. They compete against RJ in games such as Tiddlywinks, Oreo stack and other games in which winners get a trophy. DeVenzio orders them not to go easy on the kid. “He will be kicking your butt someday,” he quips.

A few days later, RJ heads to math class, where Professor Gogniat asks the class if anyone knows what’s auspicious about this day. “It’s International Women’s Day?” one student answers.

The professor calls on RJ, who is ready with his answer. “No, it’s my birthday,” he says.

Some of his classmates reach out to high-five the boy as others wish him a happy birthday. RJ smiles, happy to be turning 10 in a college algebra classroom.