A Clear Head, A Cannon for an Arm

After his first taste of big-league ball, Pittsburgh Pirates pitcher Tyler Glasnow is ready for his close-up. 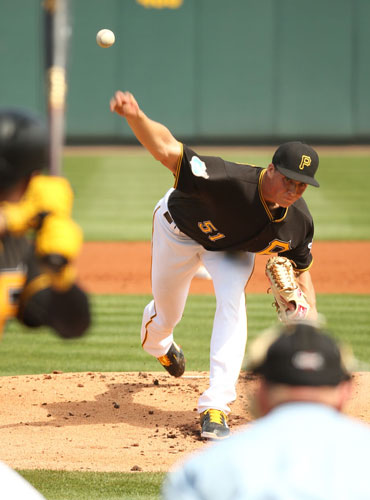 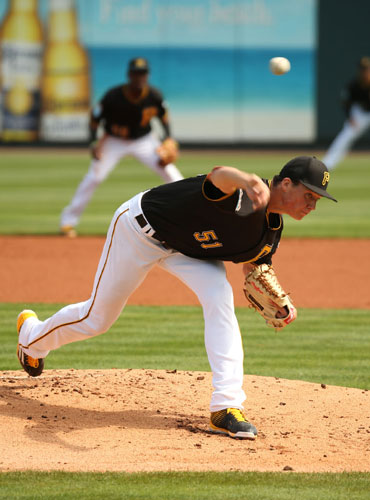 As shadows creep across the pitcher’s mound on a sweaty Saturday night at Victory Field, home of the Indianapolis Indians, a hulking figure lifts his knee to unleash the game’s first pitch. The ball is blasted off the center field wall for a triple. This was not part of the plan for pitcher Tyler Glasnow. He is one of baseball’s top prospects and the crown jewel of the Pittsburgh Pirates minor-league system. And he hardly gives up any hits, let alone triples. Something must be up.

Coaches and trainers from the Pirates farm club walk out to the mound to make sure he’s not hurt, and he quickly dismisses them from his office. It would be easy to expect an early mistake to rattle a 22-year-old pitcher, but Glasnow barely gives it a second thought. Instead, he sets his sights on the next three batters.

Each meets the same fate: a strikeout, followed by disbelief and frustration on the face of the hitter. For Glasnow, that is how things are supposed to go.

It was hardly surprising to anyone, least of all Glasnow, when he stayed in the minors during the 2015 stretch run despite impressive statistics. Patiently waiting for the arrival of an exciting prospect is nothing new for Pirates fans. It happened with Gerrit Cole in 2013, Gregory Polanco in 2014, and earlier this season with Glasnow’s buddy Jameson Taillon.

​Glasnow spent the first half of the 2016 campaign dominating Triple-A hitters; meanwhile, the Pirates pitching staff struggled, making the cries for Glasnow to join the big-league rotation grow louder. After an injury to Taillon, Glasnow on July 7 made his first start with the Pirates; he struggled somewhat against a game St. Louis Cardinals lineup, but struck out five opponents over 5.1 innings. And while the club has not yet committed to keeping Glasnow in the rotation for the remainder of the season, the 6-foot-8, 225-pound righty with a dynamic fastball and knee-buckling curveball may be a key piece if the Pirates are to make a postseason run this year and beyond.

If Glasnow is burdened by the weight of great expectations, he does an admirable job of hiding it. Sitting in the Indianapolis dugout earlier this season, he wore a youthful grin, carrying all of the negative energy of a beach bum with toes in the sand. “I got in a bad habit when I was younger, being that perfectionist and trying to fix everything like it was a book or a project,” says Glasnow.

“In baseball, you’ve just got to clear your head and be athletic.”

When Glasnow was selected by the Pirates in the fifth round of the 2011 draft, he didn’t expect his eventual arrival in Pittsburgh to be greeted with fanfare. In fact, he just thought it would be a cool story to tell when he enrolled at the University of Portland. “I didn’t think I was ready to go to pro ball,” says Glasnow.

He wasn’t the only one. A late bloomer out of William S. Hart High School in Santa Clarita, Calif., Glasnow barely registered on the radar of MLB draft prognosticators. As he entered his senior year of high school, his parents, Donna and Greg, were happy he had a college scholarship; his older brother, Ted, couldn’t envision his little brother as a pro. “If I was betting on a horse, I wouldn’t have bet on him,” says Ted.

But when Glasnow agreed to a contract with a $600,000 signing bonus — more than $400,000 above the expected bonus for the 152nd overall pick — something clicked. “As soon as he realized this was his job, it was a complete 180,” says Ted. “It’s kind of astonishing the way he changed.”

His happy-go-lucky personality remained, but he adopted an improved work ethic — the same one he had seen from his parents and his brother. “I went kind of overboard the first few years,” says Glasnow. “There’s hard work, and there’s too much hard work.”

It’s the kind of problem coaches dream of — trying too hard and caring too much — and it began paying dividends. By 2014, Baseball America ranked Glasnow among the game’s top 50 prospects; before this season, he was the No. 14 prospect in all of baseball. Aside from an ankle injury in 2015, Glasnow’s ascent seems as if it came without a hitch.
“From the outside, it definitely looks awesome,” says Glasnow. “What people don’t realize right now is how stressful it can be.”

His relaxed demeanor masks both the stress and his calculated mental approach that are expected to serve him well in Pittsburgh. “The cerebral part of the game, that is very important,” says Indianapolis pitching coach Stan Kyles. “He’s really impressed me with that.”

​Glasnow still walks too many batters; his changeup is still a work in progress. But that confident, level-headed mindset allows him to neither dwell on those flaws nor bask in early success.

“In baseball, no matter how athletic you are, you’re going to suck some days,” says Glasnow. “I’m not going to get too up or too down.”

Maybe that’s because he’s been preparing for his moment in the spotlight since he was 5 years old. His mother remembers a letter he wrote in kindergarten. “I’m going to be a Major League baseball player,” the letter stated. “And I’m going to be an All-Star.” On July 7, the first half of that prediction was confirmed. And if all goes to plan — as it has thus far — the second half will soon follow.

This article appears in the August 2016 issue of Pittsburgh Magazine.
Categories: From the Magazine, Hot Reads, Pirates