For the Steelers, this is a draft that’s long on need but short on intrigue. 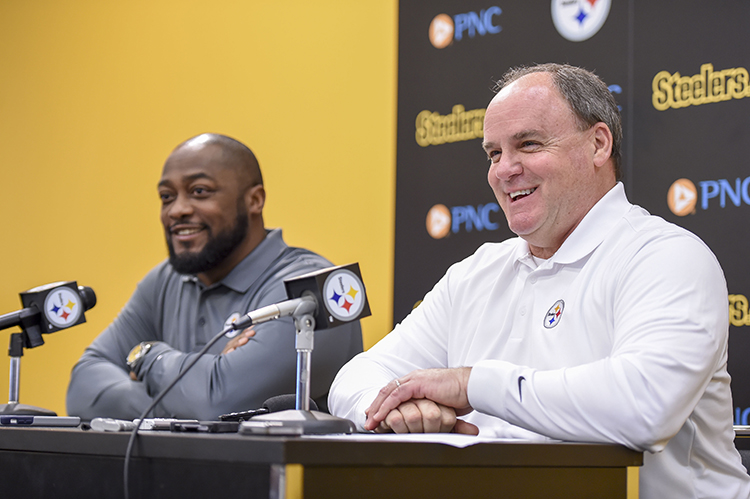 It isn’t at all like the movie “Draft Day,” a cinematic faux pas the likes of which Kevin Costner hadn’t been associated with since “Waterworld.”

“It was awful and it had no connection to reality whatsoever,” Steelers General Manager Kevin Colbert confirmed.

Well, other than the Cleveland Browns having a coveted, high-end selection and appearing for the most part to be confused and uncertain as to what to do with it.

Beyond that and the actual use of the word “draft,” the movie had nothing in common with the process that will play out starting Thursday night for the Steelers and the rest of the NFL.

“I think the nail-biting decision that you imagine and the discussion that you imagine while on the clock really doesn’t occur in that manner,” Steelers head coach Mike Tomlin suggested. “These decisions have been made, and these discussions have been in the course of transpiring over the last several months, So it’s not as climatic for us as you would imagine or as generally would be imagined.”

That should especially be the case this time around, right through that moment on Saturday afternoon when Colbert and Tomlin will sit together behind a podium on the South Side and describe in great detail how happy they are with the way everything ultimately went down.

For the Steelers, this is a draft that’s long on need but short on intrigue.

The players have been studied ad nauseam by now.

They’ve been poked and prodded and investigated and interviewed and observed and examined and graded at combines, at pro days, on tape and face-to-face.

Even their friends, relatives and coaches have been questioned.

The background checks that have been conducted would have met with Donald Trump’s approval.

And the draft board has at long last been compiled.

It is the Steelers’ stated intention, as it is every year, to follow it round by round.

That should be especially easy to do this year for two reasons:

And No. 2, the Steelers need help on defense.

They need a cornerback.

They need a safety.

They need a defensive lineman.

An argument might even be made for an outside linebacker given Jarvis Jones’ uncertain long-term contractual future, James Harrison’s impending retirement (he has to quit eventually, doesn’t he?), and the school of thought that maintains you can never have too many edge rushers.

Given all those needs, does it really matter in what specific order they’re addressed?

Not as long as the players the Steelers end up with can cover, ball-hawk, tackle and pressure the passer.

“You have to be true to your evaluation,” Colbert maintained. “If it’s close and there’s a quarterback or a safety or a corner, of course we’ll take the safety or corner, given our situation as our team is today. That, to me, is common sense, it’s a common rule in our draft room.

So they’ll take the best player as they see it whenever their turn comes around instead, and they’ll repeat as necessary.

And in the end they’ll wind up with a lot of guys who play defense.

The Steelers aren’t even as concerned about schematic adaptability for the incoming draftees as they are how well they can play.

“If you have red paint, paint your barn red,” Tomlin said.

Costner should have tried that line in “Draft Day.”

It’s quality the Steelers will be seeking first and foremost and quality they should find available for the taking starting on Thursday night.

They’ve got a line on what they need and they’ll have an opportunity to corner the market.

Even if they take a safety-first approach.