A Big Believer in Giving Back 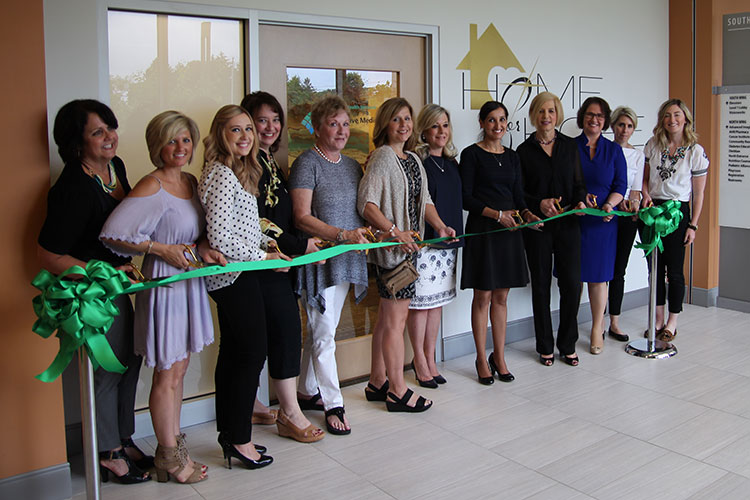 When she was in her 20s, Elizabeth Yanak thought she was invincible. She was surprised when her family doctor asked if she did breast self-exams. But she did them anyway. And it may have saved her life.

At age 27, she found a mass in her breast that turned out to be breast cancer. Her trust and belief in her care team at the Allegheny Health Network (AHN) Bethel Park Health + Wellness Pavilion helped her get through a tough year of treatment. Now, as a cancer survivor, she offers hope to other cancer patients through her annual Believe Big event.

This is the second year Elizabeth and her husband, Jay, have organized Believe Big at the Kolor-N-Kiln Pottery Studio at the Mall at Robinson. According to Elizabeth, it was her idea, but Jay took it and ran with it. He managed the event logistics as the owner/operator of Chick-fil-A at the Mall. Elizabeth also recognized the hard work and dedication of the Chick-fil-A employees, community members, survivors, and supporters who came together to make the idea a reality.

Believe Big 2017 brought together more than 100 people to enjoy food, entertainment, and camaraderie. Participants were either being treated for cancer or attended to support a friend or family member who had been affected by the disease. They painted mugs that say “Believe” in large, colorful letters. The mugs were then donated to people battling cancer.

“The goal is to provide encouragement to local cancer patients. The night itself is intended to be fun: live music, free Chick-fil-A, and painting mugs with people you love,” said Elizabeth. “It's just some really powerful stuff!”

Committed to her care team
Elizabeth donated 80 “Believe” mugs to the Bethel Park Health + Wellness Pavilion to show her appreciation for the staff and the other patients she met there. Elizabeth explained how she deeply trusts her medical oncologist, Diane Buchbarker, MD, and her care team. They attended the event out of support for Elizabeth and their other patients.

“She cares about me as a person and values me as a whole. She treats me like I'm more than a cancer diagnosis,” Elizabeth said. “I've never used these words to describe anyone else, but Dr. B. and the nurses at Bethel Park are guardian angels here on Earth. I'm so grateful I was led to them. My cancer experience would have been drastically different without them.”

The inspiration
Elizabeth was also inspired by cancer survivor Ivelisse Page, one of the founders of Believe Big in Maryland. Elizabeth reached out to her and was moved by her genuine and giving nature. Page told Elizabeth about the mug painting events and sent her a mug in the mail.

“I was moved to think that someone had painted it thinking of me and wanted to make things better,” said Elizabeth. “I smile every time I take it out of the cupboard for morning coffee.” And it’s Jay’s favorite mug, too.

“Our short, but powerful, interaction with Believe Big led us to quote and think, "Believe Big!" the entire following year. It gave us so much hope,” said Elizabeth.

The idea of hosting a Believe Big event in Pittsburgh seemed to fit with Elizabeth and Jay’s “overwhelming desire to give back to the community.”

An outpouring of support
The Yanak’s appreciate the kindness and support of everyone who came together to help make the event a success. Kolor-N-Kiln donated the space and resources for the event.

“Like many of us, [the owner/operators of Kolor-N-Kiln] have a very personal experience with cancer,” said Elizabeth. “We all just want to make a difference and give back however we can.”

Corinne Bohjanen, another cancer survivor who was treated at Bethel Park Health + Wellness Pavilion, helped set the tone for the night, singing with the band Jupiter Vinyl.

“I was introduced to her during a chemo treatment and I remember being struck by her sincerity and beauty,” said Elizabeth. “Her personality matches her voice: calming, velvety, gentle … really, really special. At the time I met her, I didn't know that she was in a band.”

Strengthening connections
Elizabeth’s experience fighting cancer and hosting the Believe Big events has connected her with many incredibly special people. One of her nurses, Noreen, attended the event as a participant. A week later, Noreen received her own mug after being diagnosed with cancer.

“It's been so moving to see how compassionately she treated patients before diagnosis and how her diagnosis has helped her to connect on an even deeper level to provide even higher quality care,” Elizabeth added.

You can read more here:

This article appears in the November 2017 issue of Pittsburgh Magazine.