A Band Called Creeper Made Me Love the Warped Tour Again

Returning to the Vans Warped Tour proves that the long-running festival can still surprise — and, against all odds, it's even a great time for grown-up punks. 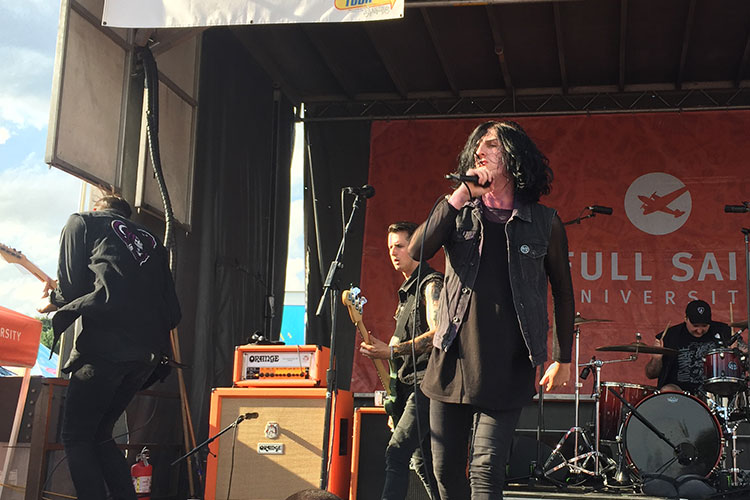 The annual Vans Warped Tour, the touring festival of punk (and punk-adjacent) rock, stands as the last of the great, big-package roadshows. While its brethren, Ozz-Fest and Lollapalooza, have transitioned into destination festivals, Warped still brings dozens of acts to cities large and small in a rolling caravan of sun-soaked power chords.

In my teens, the Warped Tour was a loud, chaotic highlight of each summer, but I haven’t seriously entertained the idea of attending in more than a decade. Recent lineups have featured few, if any, acts I’d like to see, and the target audience for the festival has gotten younger over the years; the average Warped attendee is half my age. Not only that, it’s 10 hours of direct sunlight and overpriced beer. Who needs the trouble?

Yet, a few months ago, I had a thought: What if I went back? What would this annual tradition, virtually unchanged since I was in middle school, look like through grown-up eyes?

And would they still bring a giant, inflatable slip-n-slide?

I realized I had a distinct advantage over my younger self: I could familiarize myself with the year’s lineup via Spotify. When I was a teen, you had to track down bargain sampler CDs for three-minute introductions to punk bands; now, the full catalog of every act on the bill was waiting for me. And so, a resolution: I’d listen to the bands. If I liked enough of them, I’d go.

Then I got to Creeper, pictured above. The Southampton, U.K.-based outfit released their debut album, “Eternity in Your Arms,” earlier this year. It’s a furious, infectious roundhouse of gothic punk seasoned with just enough Queen influence to turn its tracks into epics. I tried to continue my A-Z evaluation of the Warped lineup, but I couldn’t; I was just listening to Creeper, incessantly. I became attached to this album in a way I hadn’t since … well, since I was going to the Warped Tour every year.

Creeper confirmed it: I was indeed returning to the Warped Tour. There were other bands I was eager to check out — the aforementioned Barb Wire Dolls (pictured below) and Bad Cop Bad Cop were priorities, and I had been meaning to see cartoonish shock-metal legends Gwar for years — but this quest had changed from a curious expedition to a dedicated mission. 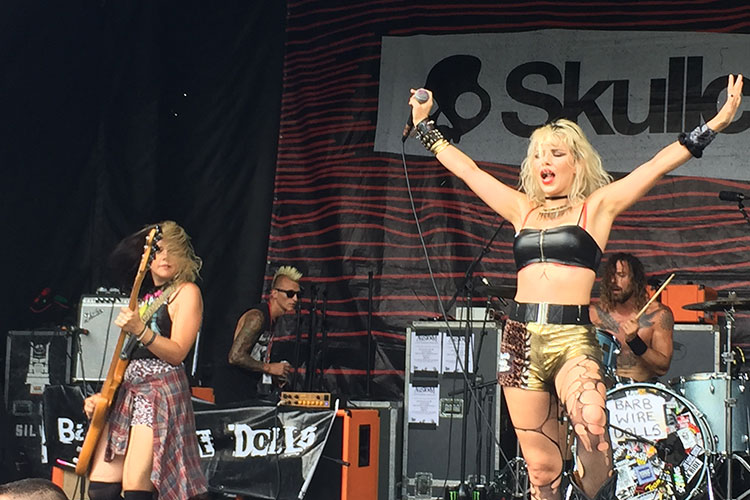 The Warped Tour’s singular peculiarity is an obstinate refusal to establish set times in advance of each stop. A lineup detailing who plays on which stage is available in advance, but if you want to know when the bands you’re after are appearing, you have no recourse but to show up when the doors open and make your way to a giant, inflatable signboard with the day’s roster attached via velcro. What’s more, the batting order is shuffled on a daily basis; an act that played at 1 p.m. in Scranton might be closing out a stage at 8:30 in Virginia Beach.

My friend Jess — a fellow former Warped attendee — met me at home at 10:30 in the morning, and we set out for Burgettstown. We surveyed the scene in the parking lot; I tried to figure out why the path marked “Pedestrian Entrance” sported a long line. Who walks to Star Lake?

“They were dropped off by their parents,” Jess pointed out. Several of my remaining brown hairs instantly turned grey.

Once inside, we evaluated the lineup — Creeper wasn’t on until 6 p.m., I learned — and started to wander. We caught most of a set by Pittsburgh-bred pop-punk act Eternal Boy (good) and British post-emo outfit Boston Manor (OK) before wandering.

The tour has always been dotted by a tent city of merchandise and advocacy booths, and I was pleased to see that intrepid volunteers are still hard at work, trying to enlighten teens in between sets. The punk ethos has always been intimately tied to civil rights and tolerance (the presence of a handful of acts, like the aforementioned cretins Attila, with less than progressive lyrics notwithstanding) and it was a relief to see that spirit persists nearly two decades into the 21st century.

After securing beer and pretzels for outrageous prices (some markup is expected, but the erstwhile Star Lake Amphitheatre should be ashamed of its gouging), we made our way to a pair of stages just over the crest of the venue’s lawn. There, a succession of bands appeared that more than justified the trip.

Anti-Flag, locally born and slowly becoming elder statesmen of the genre, turned in one of the best sets of the day. War on Women, a hardcore act out of Baltimore, upped the ante with protest songs delivered with furious abandon. Barb Wire Dolls performed with the precision and fire of an arena act. Sonic Boom Six (pictured below) were excellent, fusing ska, reggae and hip-hop for a completely distinct sound. 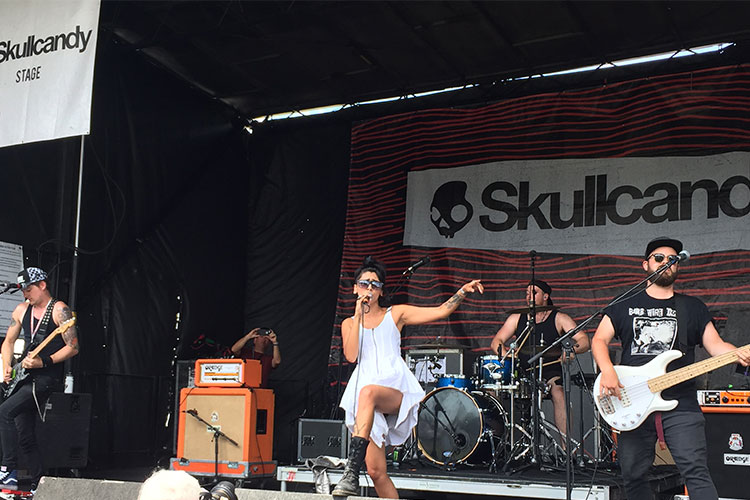 It must be said that the best bands I saw had significantly smaller crowds than the worst bands I saw. Most of the aforementioned entertained crowds numbering a few hundred at most, with some onlookers scattered on the grass beyond; meanwhile, a string of metalcore acts filled the larger stages for a few thousand fans apiece. I will refrain from the temptation to go on a these-kids-today rant, though; different styles speak to different generations. I was simply happy that a variety of bands, with fanbases large and small, were welcome on the tour.

As the day rolled on, I didn’t tire; I was energized. I had been worried that I wouldn’t have the patience or endurance for a full show as an adult; rather, I was riding a wave of discovering and embracing new music, the way I did when I was younger.

When I finally took my place for Creeper’s appearance, I was no longer even aware of my generational distinction from the rest of the crowd. I roared and sang along as the band tore through a seven-song set (all bands on the tour play for only half an hour). When they reached the final chorus of “Misery,” a bona fide hit in the U.K. but still gaining traction here, I can only say — you’ll pardon the cliche — that I felt 10 years younger.

And there was more show yet to experience — particularly since the Warped Tour allows fans much greater access to bands than the average concert. I met up with Creeper later on (they recognized me immediately; I might have felt like I was blending in, but apparently the only grey-haired guy in the crowd tends to stand out) and chatted with the Barb Wire Dolls while awaiting Gwar’s show-closing set.

I woke up the next day utterly exhausted and sporting a truly remarkable sunburn. Yet there was something profound about the experience. It is clear to me now that what we often regard as a matter of outgrowing our adolescent passions is more about convenience and laziness; it is not that we grow too old to appreciate things, it is simply that we no longer put in the effort. Whatever you did when you were 16, maybe it’s time to try it again — hopefully with the benefit of wisdom and taste.

Oh, and they do still bring a giant slip-n-slide. I didn’t partake, though. I’m too old for waterlogged pants.