Started by college student Conner Hagins when he was 9 years old, Cuddles for Kids strives to brighten up the lives of hospital patients with toys, treats and special events. 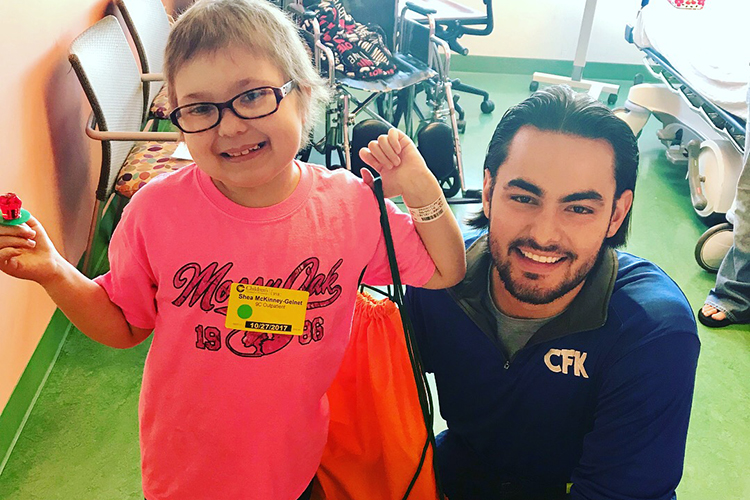 In April 2016, Natalie Zambori received news no parent ever wants to hear.

Doctors at UPMC Children’s Hospital of Pittsburgh confirmed her son, Leo, then 5, had Acute Lymphoblastic Leukemia, a type of blood and bone marrow cancer that affects white blood cells.

In the days leading up to and after the diagnosis, Leo would be submitted to countless blood tests, undergo a bone marrow biopsy and have surgery to install a port and a central line in his chest through which he would receive chemotherapy.

Throughout the whirlwind of procedures, and the life-altering news that followed it, Leo barely said a word to his family, or to anyone else. A smile hadn’t crossed his face in days.

Enter Conner Hagins, who was at the hospital for an event through Cuddles for Kids, the nonprofit organization he founded in 2006. Bearing a soccer ball, he came into Leo’s room accompanied by Iceburgh, the Pittsburgh Penguins mascot, and began chatting to the young patient about sports. Leo’s face brightened.

“Conner made Leo smile for the first time in days,” Zambori recalls. “It was the first kind of light [during] the darkest time of our lives.” 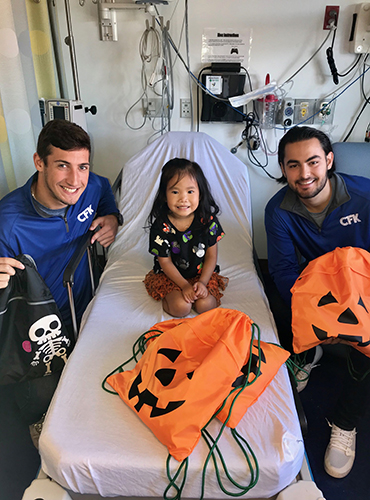 Hagins, a 21-year-old senior at LaRoche College with a dual major in marketing and management, started Cuddles for Kids at 9 years old after his father underwent emergency, double-bypass heart surgery. As Charles Hagins recovered, he was given a stuffed teddy bear to squeeze when he coughed or sneezed as a way to protect the incision on his chest from cracking open.

Hagins, who grew up in Johnstown, remembers being fascinated by his father’s bear — which he still owns — and asking his father’s nurse if all the hospital’s patients received a stuffed animal. When he learned the answer was no, he vowed to do something about it.

That year, Hagins, with support from his parents, collected 50 stuffed animals to distribute to kids at the Conemaugh Memorial Medical Center in Cambria County. The then-elementary student thought the successful campaign would be his first, and last, donation.

“We had no idea what we were going to do with it,” Hagins says. “People were probably in shock that this 9 year old had this idea to give back, but it turned into something much, much bigger.”

In 13 years, Cuddles for Kids has donated more than $520,000 worth of toys, stuffed animals, coloring books and other treats to hospital patients in Pittsburgh, Johnstown and beyond, including toys sent to Haiti and Mexico.

“We always say it doesn’t matter if you’re 2 or 92, we want to give you something when you’re in the hospital,” Hagins says.

Cuddles for Kids, which became a 501(c)(3) nonprofit two years ago — allowing the organization to expand its donation capabilities — also has held various fundraisers, including a 5K run/walk in Johnstown earlier this year that was attended, and chaired, by former Pittsburgh Steeler Arthur Moats and his wife, Shonda. 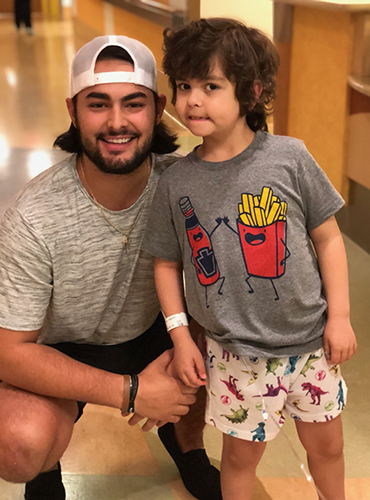 Hagins also recently teamed up with the Pittsburgh Penguins Foundation to donate and sell Pillow Pets. His organization even has created scholarships for Pittsburgh-area high school students who, like him, are making a difference in their community.

“It’s the little things [Conner] does that make a huge, huge difference to our families,” Reigel says.

Cuddles for Kids also has won the hearts of a number of Penguins and Steelers players and their significant others. The Moats family are frequent Cuddles volunteers, as is Pens winger Bryan Rust and his fiancée, Kelsey Burton. KDKA traffic anchor and PensTV host Celina Pompeani is another notable fan who has volunteered with the organization.

Burton says she felt an instant connection with Hagins, who reached out to her on social media. “It’s inspiring how dedicated [Hagins] is to helping others. You don’t see that all the time with people his age,” Burton says. “It’s something that really stood out to Bryan and I. We couldn’t be any more happy to work alongside Conner at these events. He has the biggest heart of gold.”

Leo, though, may be Hagins’ biggest fan. The now 7-year-old has twice served as honorary captain of the LaRoche men’s soccer team, which Hagins was a member of until his senior year. 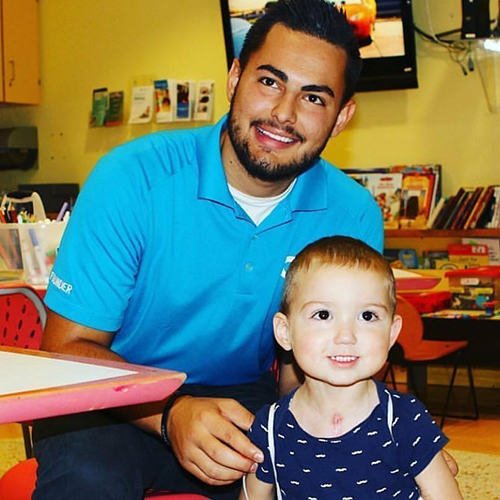 “It was so great. Leo was able to walk out with Conner and go out and warm up with them,” Zambori says. “It was really awesome to see them out there, side by side.”

Hagins and his family make sure to visit Leo, who hails from St. Martin’s, Ohio, when he’s at Children’s for treatment, sometimes playing cards with him or bringing him treats. Hagins also has helped Leo’s family, which includes older brother, Nolan, 10, attend professional sporting events in Pittsburgh.

Hagins says he considers the Zambori family his family, and Leo — who is doing well and will finish chemo treatment in June — a little brother. It’s a sentiment Zambori agrees with wholeheartedly.

“I can’t say enough about Cuddles for Kids and how Conner has taken Leo under his wing and been there for him throughout everything,” she says. “I couldn’t ask for a better role model for my kid.”

This article appears in the December 2018 issue of Pittsburgh Magazine.
Categories: From the Magazine, Give Pgh