80-Year-Old Tennis Buff Gets Back in the Game 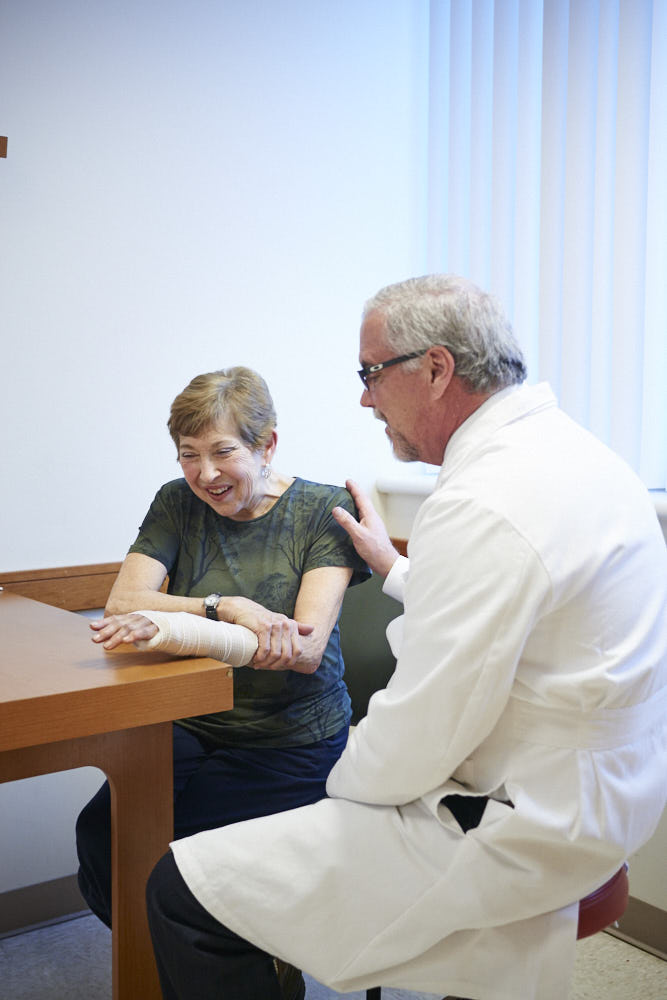 Marilyn Mendelson has been playing tennis for 50 years. She plays year-round, moving her game into the inflatable “bubble” in the winter. She has taught tennis, worked at tennis tournaments, and even cleaned the courts. When she fell and broke her wrist attempting a backhand in January, she was willing do to whatever it took to get back in the game as quickly as possible.

“I wanted to get back to playing,” said Mendelson, 80, who competes against women in their 50s. “At this age, you use it or lose it.”

“I wanted a doctor who would look at me as a person with an active lifestyle and not dismiss me because of my age,” said Mendelson, of Wheeling, West Virginia.

In Wheeling, her physician recommended she visit an Allegheny Health Network (AHN) orthopaedic doctor. When Mendelson first called for an appointment, she was told she would have to wait a week. The phone operator was sympathetic to her situation, however, and recommended she call 412.DOCTORS (412-367-8677) for a same-day appointment.

Patients who call between 7 and 11 a.m. can get an appointment later that afternoon. If you call after 11 a.m., you can often get one the next day. Mendelson called in the late afternoon and got an appointment within 24 hours.

Mendelson saw Edward Birdsong, MD, an orthopaedic specialist, who promptly ordered an MRI. It showed that Mendelson not only had a broken wrist, but a severed ligament.

“I was scared about not getting back 100 percent mobility,” Mendelson said.

But Birdsong understood her ambition to get back in action by summer. Birdsong and a team of specialists performed surgery to repair her injuries. They prescribed physical therapy to help her regain her agility and strength.

AHN is unique in that it takes a team approach to patient care. Orthopaedists, surgeons, physical therapists, and other care experts collaborate to evaluate each patient and decide on the best possible outcome for the individual. This helps eliminate duplicate testing and unnecessary appointments and helps reduce costs.

According to Mendelson, the hand therapy is a bit painful, but worth it.

“The ball is in my court. I have to do my exercises,” she said. “I want to get back in the game. I’m going to try and make it happen.”

Mendelson feels a sense of partnership with Birdsong and the rest of her care team.

“They listened to me and my priorities and wanted the same results I wanted,” she said. “That’s really valuable.”

According to Mendelson, after her surgery, someone from AHN called her five days in a row to see how she was doing.

“They are all about customer service,” she added. “They listened to my concerns.”

Mendelson has told her friends and family about same-day appointments and they share her enthusiasm for the program.

“This plan is absolutely a phenomenal idea,” she said. “We all have unexpected things happen.”

Since her accident, friends have been visiting her home and bringing her food and flowers. They, too, are anxious for Mendelson to return to her tennis league. A few women have agreed to sub for her in matches until she can get back to full strength. In the meantime, Mendelson has been focusing on staying fit with water aerobics, walking, and exercising at home.

Maintaining a slower pace isn’t easy for Mendelson. In decades past, she has gone rafting in the Grand Canyon, biked in the Netherlands, and has lofted above Earth in a hot air balloon. She has gone skydiving and is SCUBA-certified. According to Mendelson, for the past 40 years, she has done a combination of yoga, kickboxing, and free weights to stay in shape. She even ran a marathon at age 40.

“You just have to move and watch your diet and your life is more fun,” she said.

This article appears in the March 2017 issue of Pittsburgh Magazine.