7 Things You Need to Know About the Pittsburgh Marathon

Before you head for the course, brush up on etiquette for the race. 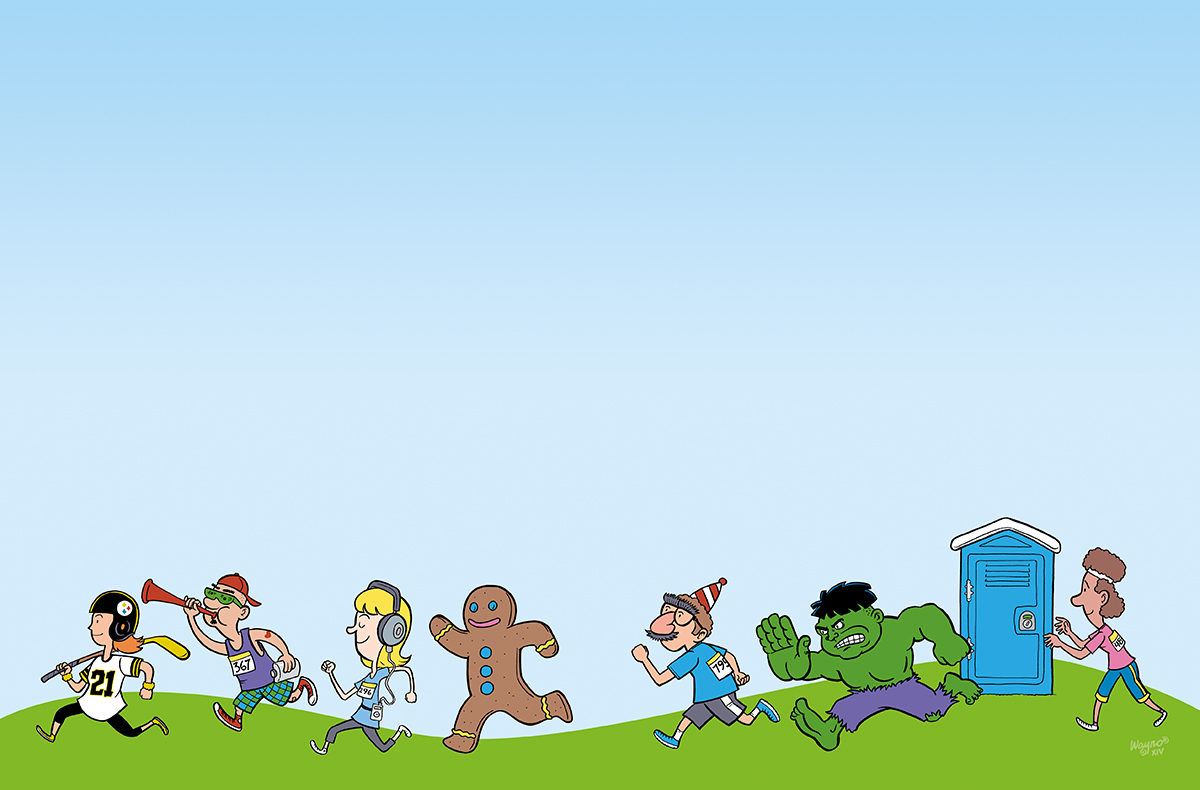 Marathon runners train for months before a race day, investing sweat, time and cash to equip and fuel their bodies before lacing up their shoes. But if you’re one of some 30,000 folks planning to participate in the Dick’s Sporting Goods Pittsburgh Marathon or its related events — or one of tens of thousands more who plan to watch — just how well have you prepared to savor an experience that’s uniquely Pittsburgh’s?

Whether you’re a running veteran, a newcomer to our city’s streets or an enthusiastic race-day spectator, here are seven inside tips to help you better appreciate the 26.2-mile event May 4 that begins and ends downtown, covering 13 neighborhoods, five bridges and three rivers in between.

Sporting events enable Pittsburghers to celebrate civic loyalties, and the marathon is no different. More than one-third of marathon participants in 2013 were from Pittsburgh proper, and nearly 28,000 were Pennsylvania residents.

“The Pittsburgh community is very loyal to the city,” says race Director and CEO Patrice Matamoros. “I think our runners are the same way. It’s like something you just do, like [coming home for] Christmas, or you go to a Steelers game or a Pirates game, or going to something ‘Pittsburgh’ to show your pride for your city.”

Participants often wear shirts from hometown races, jerseys from their running clubs, Steelers, Pirates or Penguins gear — and yes, occasionally some will don apparel from other professional sports teams. Just remember, unlike other sporting events, visiting athletes are not the opposition on marathon day and should be welcomed accordingly.

“When you’re in a marathon, everyone is together,” says Dan Holland of Friendship, who has run in the Pittsburgh Marathon in each of the last five years. “It’s not like a football game where everyone is against Cleveland, or a hockey game and you’re looking to fight someone from Philadelphia.”

music to the ears.

Earphones are permitted at the Pittsburgh Marathon, and using them doesn’t violate running etiquette if you keep them in both ears with the volume turned down. Without them, though, you’ll be more likely to enjoy at least some of the 65 bands performing along the course in what are anything but nightclub gigs.

“[In 2013] it was strange that a few runners were shouting out song requests they would obviously never get to hear,” says Zig Daniels, lead singer for The Delaneys, a rock band that performed on a traffic island along the Boulevard of the Allies, downtown, and is scheduled to return this year. “Of course, they were requesting the dreaded ‘Free Bird.’”

Apparently there’s one in every crowd, even when those crowds go by every 10 seconds.

A popular shirt among marathon runners proclaims “YINZ RUN LIKE JAGOFFS,” a message that’s a double dose of Pittsburghese and running trash talk. Dan Desko, owner of the Penn Hills-based Fresh Factory vintage T-shirt business, came up with the design last year to complement his RUN-PGH shirts that he sells at the marathon weekend expo. Thanks to a viral Facebook post, the shirts quickly sold out, forcing Desko to restock before the expo.

Jason Bodnar, the top U.S. finisher in last year’s Pittsburgh Marathon, bought nine shirts for friends who accompanied him from North Carolina to run in the race. A western Pennsylvania transplant and University of Pittsburgh graduate, Bodnar says he presented the gag gifts to razz his buddies, joking that their race performance warranted the designation.

How else might a runner risk attaining that status? Race veterans advise against chatting with fellow runners too much mid-course. Ditto for acting as an unsolicited tour guide for out-of-town folks.

“Whether you’re from [Pittsburgh] or you’re not, the fact that you’re out there giving a hard effort, I think that’s what’s appreciated by the spectators and everyone out there,” says Bodnar. “As soon as they open the streets up for you, you feel welcomed.”

And it’s tough to wear out that welcome. Streets along the course technically are open for six hours. James Kirwa of Kenya led the way in 2013, winning the men’s competition with a time of 2:13.37, while Richard Ramsey of Verona brought up the rear at 6:59.50 — with patient encouragement and high-fives from Pittsburgh Police Lt. Ed Trapp, who escorted Ramsey to the finish.

Sharing the road is instinctive for marathon runners. Except at the starting line and first mile, the proper separation between runners is two to three steps. Stay to the right or toward the curb if you’re slower than the pack.

Yes, you know that Pittsburgh is hilly, but did you expect a bridge to be an uphill climb? The course’s five bridges trick runners with unanticipated slopes. The Birmingham Bridge sometimes stifles runners more than the slow ascent on Forbes Avenue to Oakland.

Road rules for spectators confine them to curbs, sidewalks and yards. The sight of the traditional Parking Chair is more welcoming than forbidding on race day — its meaning evolved from “Yinz ain’t taking my spot!” to “This is where I’m going to sit and cheer for yinz runners.”

As the marathon course passes through Oakland, Pitt stops provide excuses for university alumni to slow their pace and reminisce during the marathon’s midway point. For everyone else, there are pit stops every two miles along the course. They’re a runner’s Cathedral of Yearning with medical, hydration and Port-A-Potty stations.

Yes, it’s permissible to toss aside your cup after draining it — race volunteers will pick up and dispose of it. No, you won’t have to resort to seeking relief in an actual cathedral, as runner Jordan Hinds did while running in the Rite Aid Cleveland Marathon in 2010.

When nature called, the Kennedy Township resident took it up with a higher calling and interrupted a church’s Sunday-morning worship, tapping on shoulders in the back pew for directions to a restroom. Consider that a veteran’s move: Hinds has run in full and half marathons in 14 cities, including Boston, New York and Pittsburgh, where he plans to run again this month in the half marathon.

Marathon participants run for reasons that range from zany to inspiring. In 2013, Nicole Dann-Payne of Indiana, Pa., made a friendly wager with Matt Gaudet, co-owner of GingerbreadMan Running Co. in Indiana. Gaudet was attempting to break a Guinness World Record for the fastest marathon completed while dressed as — what else? — a gingerbread man.

Gaudet, a Zelienople native, says he broke the record but still owed Dann-Payne a pair of shoes from his store for failing to beat her time. Running in her first full marathon, Dann-Payne’s initial goal was to catch and beat the gingerbread man. After passing him, spectators alerted her to a new challenge: She was racing for the lead. “That really motivated me — people just cheering for me [and] telling me where I was in the race,” says Dann-Payne, who placed eighth in the women’s division.

More than 3,000 other runners collectively raised more than $1.6 million for favored causes in 2013. Among them was Mike Bruno of Cecil Township, whose 8-year-old daughter, Cassie, has autism and is legally blind. He ran blindfolded and tethered to sighted guide Jim Irvin to raise awareness and more than $27,000 for vision research.

stop and smell the pierogies.

Appreciating levity along the course is a must for distance runners as they pass signs emblazoned with such messages as “FREE BEER: 13.1 MILES AHEAD.” Spectators and runners connect with occasional high-fives along the crowded sidewalks of the South Side, in Homewood and other particularly festive communities. On the home stretch in Bloomfield, runners just might be offered that free beer from an unsanctioned aid station.

All 13 neighborhoods along the course are throwing a party. Even while blindfolded last year, Bruno says he could pinpoint his location from cheers and smells wafting from grills warming an array of ethnic foods.

“How many festivals do you know that are 26.2 miles long?” says Matamoros, who has served as race director since 2009. “It really does band the city together.”

In the end, even if you’re a runner who didn’t pass anyone all day, you still can pass judgment on the city. If its people helped you to reach the finish line, then a toast is in order. By then, you could use the drink.

This article appears in the May 2014 issue of Pittsburgh Magazine.
Categories: Sports