Strap on an Indiana Jones fedora and journey through the mysteries of the past with PittGirl. 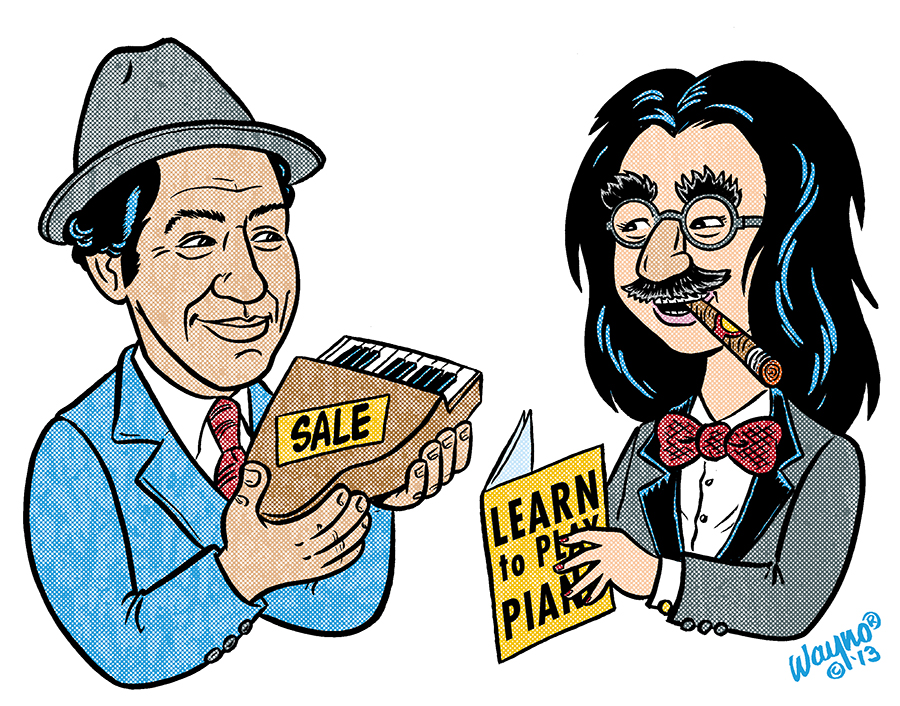 I stared at an early-1900s photograph taken near the huge Exposition Building that once stood on the Allegheny near the confluence of the three rivers. In the corner of the image was an unmistakable set of roller-coaster tracks.

Suddenly, I was Indiana Jones gawking at the Holy Grail. My fedora blew off in the rush of excitement. I employed an elaborate, painstaking technique (commonly known as a “Google search”) to unearth other pictures of the wooden coaster that was once a featured attraction at the Exposition. Sadly, it’s long gone.

I often try to get ’Burghers equally excited about Pittsburgh history, so here are seven other slightly obscure facts about our past. I hope they’ll turn you into a modern-day Indiana Jones, too.

>> Chico Marx, the piano-playing Marx brother, lived in Pittsburgh for a year in the early 1900s. He managed a music-publishing store near Fifth and Wood, and he was responsible for accompanying singers as they performed for customers. Chico even met his wife in Pittsburgh.

>> The red-brass Kaufmann’s clock just celebrated its 100th birthday — but it wasn’t the first timepiece in that location. The original, a four-sided clock mounted on a post, was removed in 1912. ’Burghers weren’t happy to discover the iconic artifact was suddenly missing from their meeting place, so Henry Kaufmann had a new clock installed.

>> In the first part of the 20th century, a thriving Chinatown with a recognized mayor and more than 5,000 residents took up the area downtown bound by Third Avenue, Second Avenue (Boulevard of the Allies), Grant Street and Ross Street. Reports from the time speak of tense family disputes, colorful festivals and the eventual decline of the neighborhood as residents moved to the suburbs. Pittsburgh’s Chinatown had all but disappeared by 1970.

>> One of the children of Maria and Captain von Trapp of The Sound of Music fame lived here for eight years in a religious community. Rosmarie von Trapp said, “I went to bed, and when I got up in the morning, my depression was gone. Everything changed in one night. I decided to join a religious community in Pittsburgh, Pa. Many of us had come there from the street … this place saved me.”

>> The Point fountain is fed by a “fourth river” that flows 50 feet under the city. “Fourth river” is a misnomer for the aquifer formed by ancient glacial waters. Sediment holds groundwater and gives it river-like properties. From there, the fountain pulls its water. For almost 150 years, the “river” has also provided some of downtown’s drinking water.

>> Back when the Squirrel Hill Tunnels were young, all traffic was stopped as a safety precaution when a gasoline tanker approached. The tanker proceeded through the tunnel completely alone. This happened 1,100 times a month. And you think Parkway East traffic is bad today.

>> There used to be another island on the Allegheny River near Washington’s Landing, and on that island a young George Washington almost lost his life in the icy winter of 1753. When our future first president tried to escape aboard a quickly assembled raft after a dangerous mission, he was tossed into the river. He clung to a log and climbed up the bank of Wainwright’s Island to wait out the night with his companion. By morning, the narrow stretch of water between the island and modern-day Lawrenceville had frozen over, and they walked back to shore. What happened to Wainwright’s? No one knows for sure, but the small island was likely filled with soil in the late 1800s.

I’ve only scratched the surface of everything there is to learn about the people and things that shaped our city’s history. We can dig forever without uncovering it all. So grab your own fedora and get started.

As for me, I’m off to talk to City Council about this amazing idea I just had for a roller coaster at the Point.

We’ll call it The Fifth River.

This article appears in the August 2013 issue of City Guide.
Categories: From the Magazine, Hot Reads, Visitors Guide