By car, train, bicycle or foot, head outside to take in these unforgettable vistas. 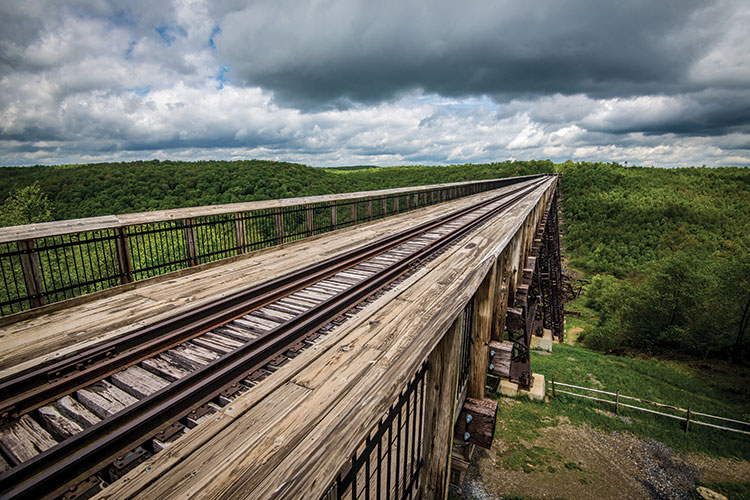 Once billed as the “Eighth Wonder of the World,” the Kinzua Bridge was ripped apart by a tornado in 2003.

Itinerary
Linger in the rustic, thoughtfully designed Visitors Center to get a historical sense of the site, then head outside to walk the 600-foot “plank” — actually the remains of the southern span of the bridge, which survived the tornado’s path. A glass window in the observation deck provides a stomach-churning view straight down to the rusted remains of the bridge, which was the highest railroad bridge in the world at 301 feet at the turn of the 20th Century. You also can clutch the hand railing and peer over the walkway’s edge to the forest floor 225 feet below.

Look for
Hiking trails, both easy and strenuous, as they wind down to the forest floor below, where you can see massive shards of the bridge’s skeleton up close.

Fees & Hours
Free. The Visitor Center is open 8 a.m. to 4 p.m. daily through November, then closed on Sundays.

Activity Level
Moderate hiking trail down to the forest floor. 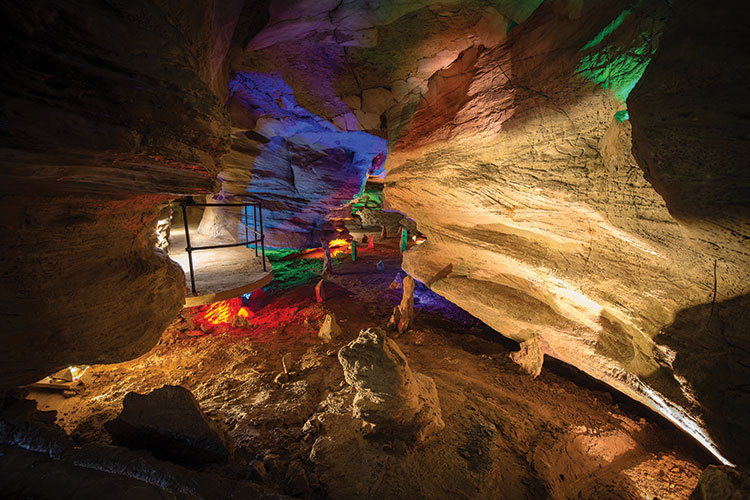 Go subterranean at the largest natural cave in Pennsylvania.

Itinerary
No blue skies or waterfalls to see here, but the views are otherworldly. In the middle of Forbes State Forest lies a privately owned geological preserve; burrow underground and discover Laurel Caverns. Tours come in two types: slow and easy, or adventurous and strenuous. The caverns’ more accessible chambers (The Grand Canyon, Hall of the Mountain King) are brightly lit in primary colors, while deeper rooms get progressively darker. In the claustrophobic Flue, you see only by flashlight and headlamp, while the Ballroom opens up to a soaring 40-foot ceiling. The forest floor is 200 feet above you.

Look for
Where bats live. Laurel Caverns is the largest natural bat hibernaculum in the northeastern United States. During winter months bats hibernate there.

Activity Level
Easy to moderate, depending on tour. 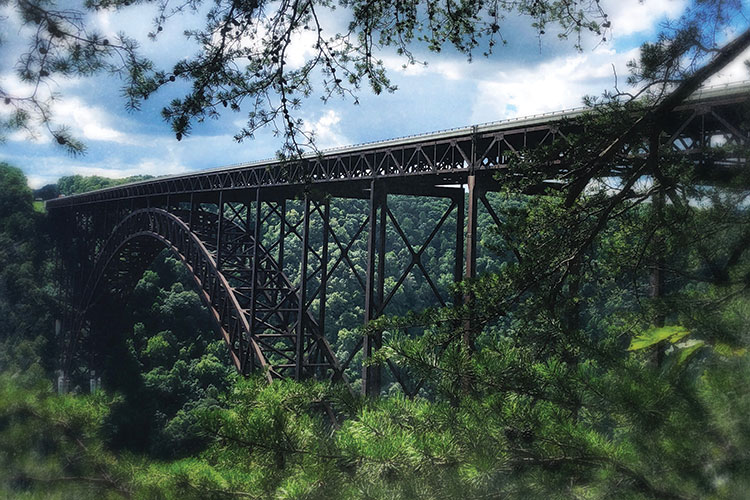 Once the “longest,” the view is just as spectacular as the accolades.

Itinerary
It was once the world’s longest single-span arch bridge, at 3,030 feet; at 876 feet tall, it is one of the highest vehicular bridges in the world, and the third-highest in the United States. Bridge construction began in 1974; three years later, point-to-point travel time was reduced from 40 minutes to less than a minute. Take a staircase down into the gorge to view the bridge, or visit on Bridge Day each October for rappelling, ascending and BASE jumping demonstrations. For more adventure, take the guided, safety-rigged Bridge Walk on the 2-foot-wide steel catwalk under the roadway. 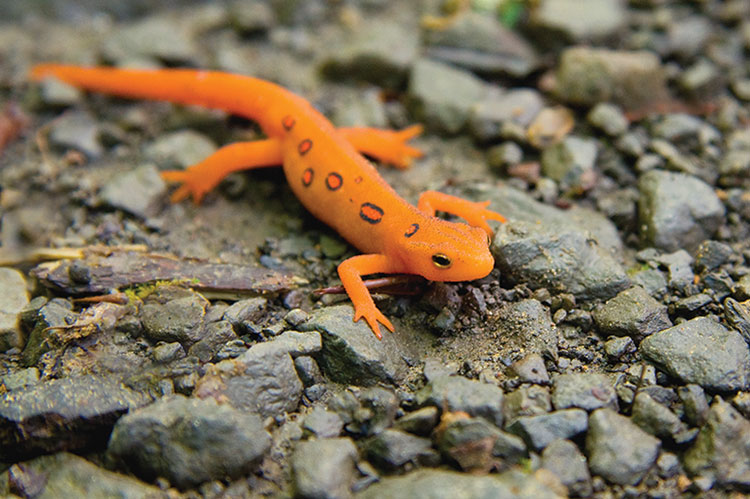 Look for
Salamanders! West Virginia is home to 34 different species, many of which can be found in New River Gorge’s waterways.

Activity Level
The staircase descends 200+ steps into the gorge to a viewing deck and sitting area; rest up for the return trip to the top — it’s a bear. 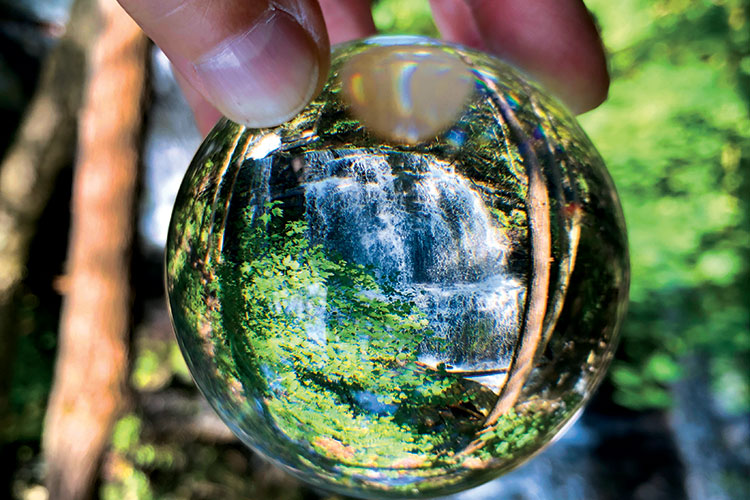 Famously known as the Grand Canyon of Pennsylvania, Pine Creek Gorge offers breathtaking views for visitors and spectacular trails for hikers. Plunging 800-plus feet down the canyon side to the bottom of the gorge, the 2-mile (down and back) Turkey Path was cleared by timber-hauling mules. Waterfalls greet hikers along this trail, while the shorter (0.6-mile), less strenuous Overlook Trail features an abandoned incinerator. 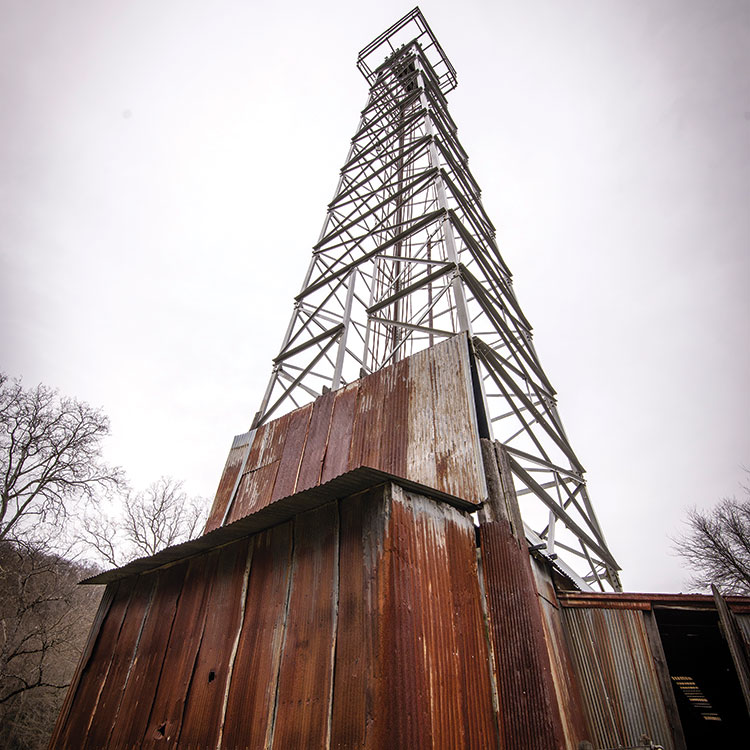 For a more industrial scenic view in a surprisingly wild setting, walk the Gerard Hiking Trail at Venango County’s Oil Creek State Park. Once the site of a minor oil boom in the 1860s — with the Petroleum Centre train station, Drake Well, Miller Farm and drilling machinery frozen in time — the trail loops past steep hills and waterfalls and through wetlands to show how nature can reclaim its territory. 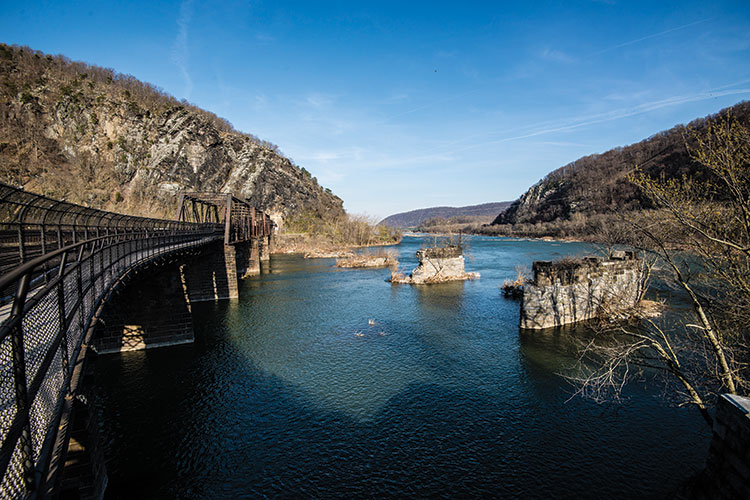 Two rivers meet here to become one, but you’re not in Pittsburgh anymore.

Itinerary
Leave the car behind and take the train to Harpers Ferry, with bicycles in tow. You’ll find this the perfect destination for the cyclist, hiker, photographer, Civil War buff or shopper in your group. For the best view, climb the railroad bridge walkway and look down to the Potomac River at your left and the Shenandoah River at your right; just ahead, they meet to form the Chesapeake Bay. You’re now seeing West Virginia, Maryland and Virginia all at once. The Civil War was disastrous for the small town but reconstructed and restored buildings and museums dot the streets for an immersive step back in time.

Look for
The beautiful St. Peter’s Catholic Church up several flights of rough-hewn stairs to the hilltop, as well as the John Brown Museum in the Historic District.

Activity Level
The Historic District is a bit hilly but easily walkable if you take your time. 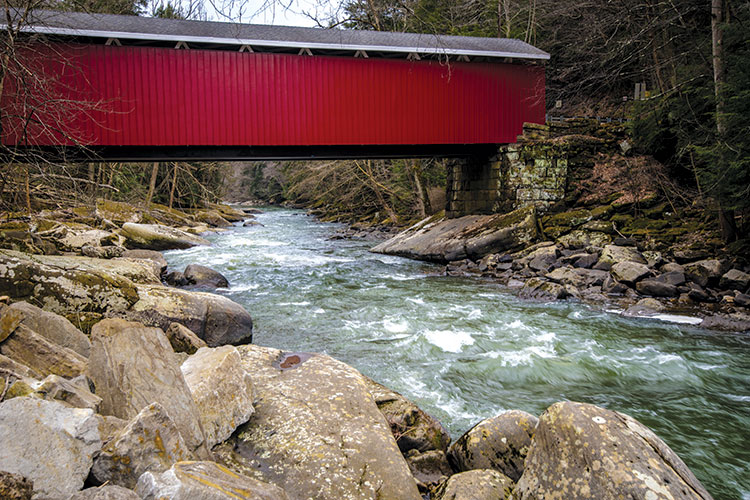 A deep, impressive gorge can be found right in our own backyard, complete with a historical watermill and photo-friendly covered bridge.

Itinerary
Park in the upper lots and hike down the river trail to the preserved site of the gristmill, where oats, corn and buckwheat were processed until the mill closed in 1928. The mill is stunning in all seasons, with the rapid waters of Slippery Rock Creek flowing fastest in spring and fall beneath the covered bridge (built in 1874). The park’s many trails are part of the North Country Trail, the longest scenic trail in the country, running from New England to North Dakota.

Activity Level
Most trails here are rated “moderate,” but whitewater boating on Slippery Rock Creek is rated a Class II-III.

This article appears in the April 2019 issue of Pittsburgh Magazine.
Categories: From the Magazine, Hot Reads, Things To Do