Yesterday’s win proved that the Pirates can compete with any team in the postseason. But they’re going to need to address a few things to stick around. 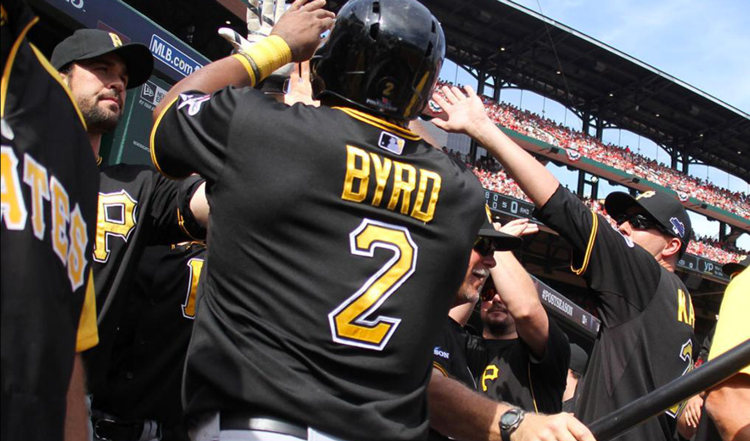 You’re forgiven if you doubted the Pirates’ ability to go deep into October this year. A young, untested team playing postseason baseball for the first time is likely to falter, no matter how much mojo it has floating above its home yard.

But the last two games — yesterday’s especially — demonstrated that the Pirates are poised to make a serious run. The Bucs have outplayed the Reds once and the Cardinals — a more experienced and probably more loaded club — twice. With the exception of Thursday’s one-man meltdown in St. Louis, the Pirates have taken care of business efficiently and decisively so far this month.

Nine more wins are required for a championship, however, and they’re only going to be tougher to grab. While the roster has been mostly effective through a week of postseason play, there are still questions that the Pirates should address (or at least discuss) to lock up a win in the NLCS and a shot at the pennant.


1. Should Justin Morneau continue to bat after McCutchen?
There’s little controversy in putting a former American League MVP with power and plate discipline in the cleanup spot. But Morneau, while hitting a respectable 5-for-17 in the postseason, has yet to record an RBI — despite McCutchen’s seven hits and five walks. Cutch has been on base for Morneau fully two-thirds of the time (his OBP is .667, leading every player still competing). It’s tough to shake up a lineup that’s working, and pitchers are still dancing around Morneau a bit. Still, I’d love to get the hot bats of Russell Martin or Marlon Byrd behind the MVP candidate and see what happens.

2. Should Neil Walker be benched?
Walker is now batting 0-for-13 in the NLDS. He hasn’t recorded a walk, and he’s struck out three times. Since going 2-for-5 with an RBI in the Wild Card game, he’s been a black hole. The Pirates’ depth — such as it is — is in the outfield, not the infield, and there’s not a natural solution if Walker leaves the lineup. But if he started 0-for-3 today, I’d think about putting Josh Harrison in there — or trotting both Jordy Mercer and Clint Barmes out, with Mercer at second. You’d hate to disrupt the feel-good story of the kid who grew up in Pittsburgh taking the Bucs back to the playoffs. But it’s a very bad time for a slump.

3. Should Mark Melancon be shut down?
I’ll answer this one for ’em — yes. Melancon was lights-out for much of the season, and he spent a stretch as one of the most dominant relievers in the game. That stretch is over. His blown saves in September may have single-handedly knocked the Pirates out of an N.L. Central title, and the moonshot he allowed to (the admittedly unstoppable) Carlos Beltran yesterday could’ve led to serious trouble. The rest of the Shark Tank has been too good to keep trotting out a shaky Melancon in the eighth.

4. Who should be pinch-hitting?
The Pirates have not recorded a pinch hit so far in the NLDS. Not necessarily a coincidence: Garrett Jones hasn’t had an at-bat. Jones was shaky at best during the regular season, but given his experience and power, I’d feel more comfortable with him trying for a clutch double (or, for that matter, a moonshot into the river) than the likes of Gaby Sanchez or Mercer. I wouldn’t get cute with these decisions; Jones has 15 HRs and 25 RBIs against right-handed pitchers this year. He’s your pinch-hitter against them. Against lefties, I’m not sure. But the Pirates should have a plan, and that plan probably shouldn’t involve the perennially disappointing Gaby Sanchez, who grounded into a double play yesterday.

5. What of A.J. Burnett?
Hopefully this is a short-term dilemma. The Pirates should decide, if only internally, that A.J. Burnett will start game 1 of the NLCS — which means that Gerrit Cole would start a potential NLDS game 5 Wednesday in St. Louis. Burnett is an average pitcher on the road — this year, 5-7 with a 4.22 ERA — but a disastrous one at Busch Stadium, where he posted an 8.10 ERA in the regular season. The Cards, as a club, posted a .941 OPS against Burnett at home. We all saw Thursday’s result. Simply put: If A.J. Burnett starts on Wednesday against St. Louis, the Pirates probably aren’t moving on. So it’ll have to be Cole if Wednesday’s game happens; hopefully the Dodgers will beat the Braves and Burnett can take the mound this weekend at Dodger Stadium, where he did well in one appearance earlier this year.

These are all, obviously, those clichéd “good problems to have.” We’re in the postseason debating details while Pedro, Liriano, McCutchen and Martin win playoff games for the Pittsburgh Pirates. After yesterday, it looks like they’re poised to win quite a few more.