5 Pittsburgh Craft Distilleries Earning a Place on the Shelf 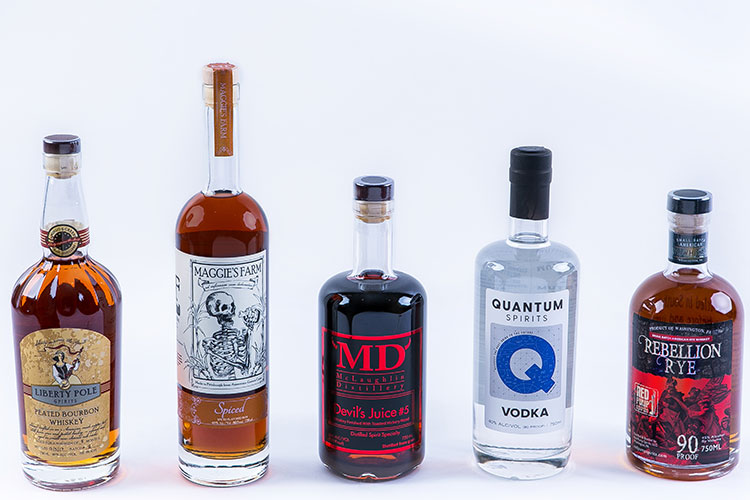 With the American Craft Spirits Association bringing its annual convention and awards competition to the David L. Lawrence Convention Center on March 5 and 6, local craft distillers are in the spotlight. Standouts Wigle Whiskey and Boyd & Blair have rightfully earned a place on the shelf; here are some others you may not be as familiar with. Each of these distilleries offers tastings as well as cocktails — and you can buy bottles to take home during your visit. Some products also are available at Pennsylvania Libations, 2103 Penn Ave., Strip District, or at local restaurants and bars. 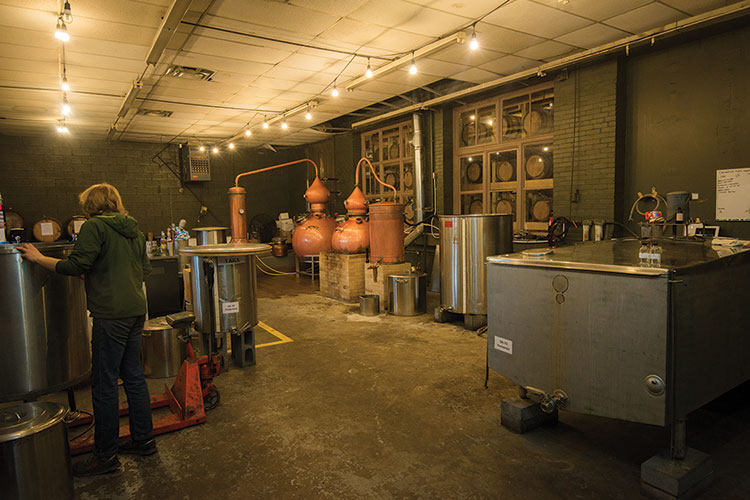 Tim Russell will tell you he was personally more of a whiskey man five years ago when he cashed in his 401(k) to start making Maggie’s Farm Rum.  But the former project manager for a Uniontown defense contractor figured that craft rum was an underappreciated and untapped market.

Molasses, a byproduct of refining sugar, is the traditional base of rum. Russell instead uses turbinado sugar, which is costlier but easier to work with and gives his rums a grassier, less earthy character. The spiced rum uses no extracts, favoring hand-ground vanilla beans, cinnamon, nutmeg, clove, allspice, cardamom and star anise, along with fresh orange zest. The limited release Single Barrel and Queen’s Share distillings have scooped up gold medals and best-in-show awards at several prestigious competitions. 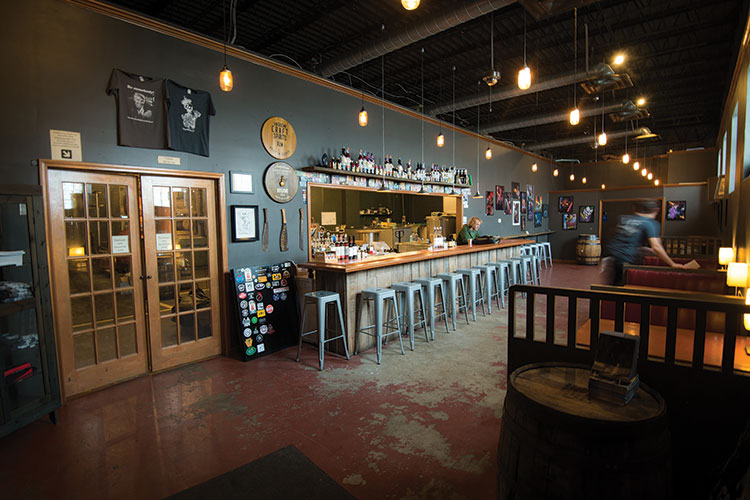 Russell’s distillery is in a low-slung, nondescript blue building on the outskirts of the Strip. Inside, the cocktail bar (a Pittsburgh Magazine 2017 Best Bar) gives a full view of the workshop and its attractive Spanish copper still. Tim’s wife, Layla, manages the bar, which features selections that show off Maggie’s Farm’s newest offerings, coffee liqueur and falernum. The former is a 40-proof concoction that uses cold-brewed beans from Papua New Guinea roasted at Commonplace Coffee. Falernum, a Caribbean product that’s a staple in tiki drinks, is a sweetened rum base with fresh ginger root, cloves and lime zest. 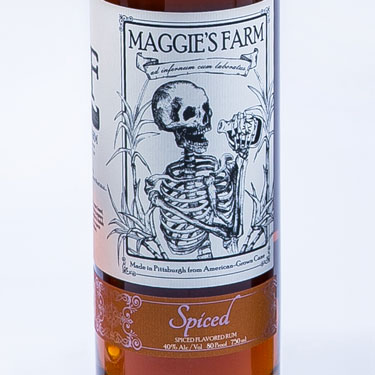 Bottle to Buy: Spiced Rum
This will redefine what you think spiced rum can be, with clean, bright flavors from fresh-ground spices that would be a shame to mask with cola. It has nothing of the syrupy character of much mass-produced spiced rum, partly because it is not back-sweetened after distillation.  ($30) 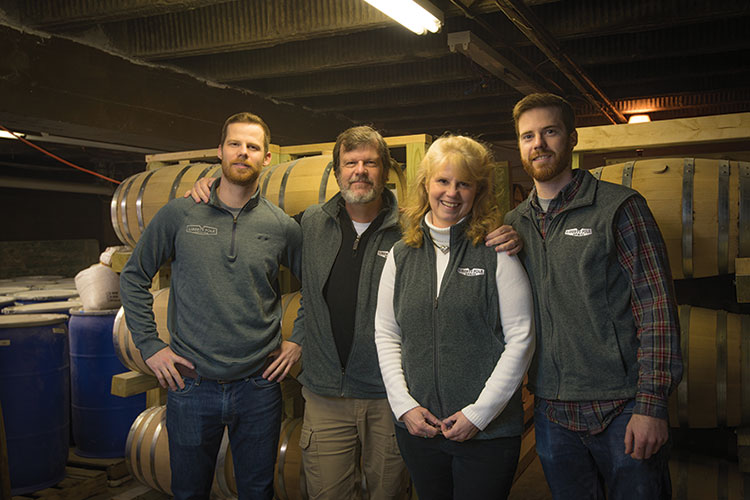 Making whiskey is a mom-and-pop business for Jim and Ellen Hough and their adult sons, Rob and Kevin, who stepped away from their engineering jobs to be full-time distillers.  Jim started things in a 10-gallon backporch still kept in the production room to show visitors. Ellen, a history buff, has outfitted Liberty Pole’s tasting rooms to recall the Whiskey Rebellion, with touches such as an upside-down portrait of then-Treasury Secretary Alexander Hamilton and an actual liberty pole, an Early American decorative statement that stood for defiance against tyranny. 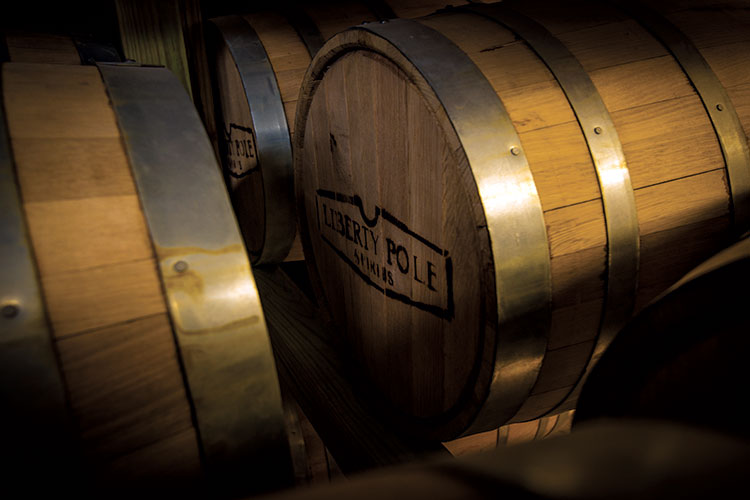 Ellen is a self-described “dirt-eater,” a fan of the smoky, briny single malt scotches from the island of Islay. She persuaded Jim to try to marry some of the complex flavors she enjoys with the typically sweeter bourbon. The resulting peated bourbon was a bigger success than they expected, winning a gold medal at the 2017 American Craft Spirits Awards. They know when to take it easy, too — their standard bourbon is a softer style with wheat in the mash. Their latest product, bourbon cream liqueur, can be enjoyed on its own or do wonders for a mug of coffee or cocoa.

Rye, wheat and corn all are locally sourced and milled onsite. The growing number of aging barrels in the cellar, where the original 5-gallon containers now are crowded out by 10-, 15-, and 30-gallon barrels, indicates that the Hough family business has a promising future. 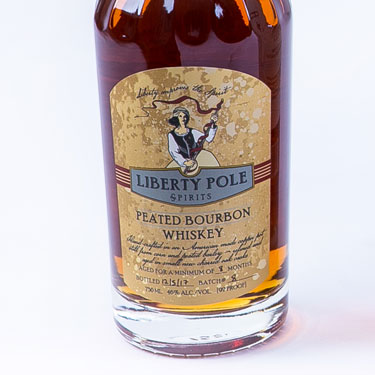 Bottle to Buy: Peated Bourbon
Combining two flavors from the opposite end of the whiskey liquor spectrum makes for a surprising first sip that, especially for fans of smoky flavors, gives way to a “you got your chocolate in my peanut butter” moment of revelation.  ($57) 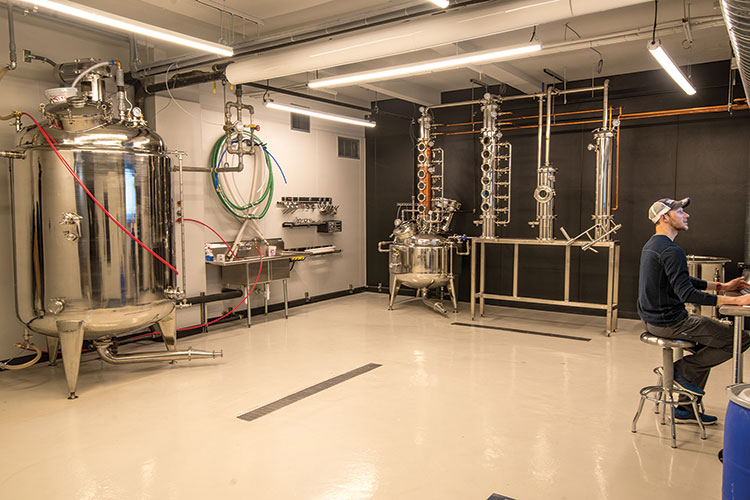 The newest craft distillery in the region looks the part, with a stylish monochromatic tasting room and bar with décor resembling a laboratory.  Proprietors Ryan and Sarah Kanto moved to Pittsburgh in 2011 from Dallas, working in the energy industry before deciding to launch their own entrepreneurial distilling venture. Ryan is a chemical engineer who wanted to take his homebrew hobby a step further. Sarah majored in history, but she says Quantum Spirits will leave historical associations to the more established distillers and instead focus on the science of spirits. 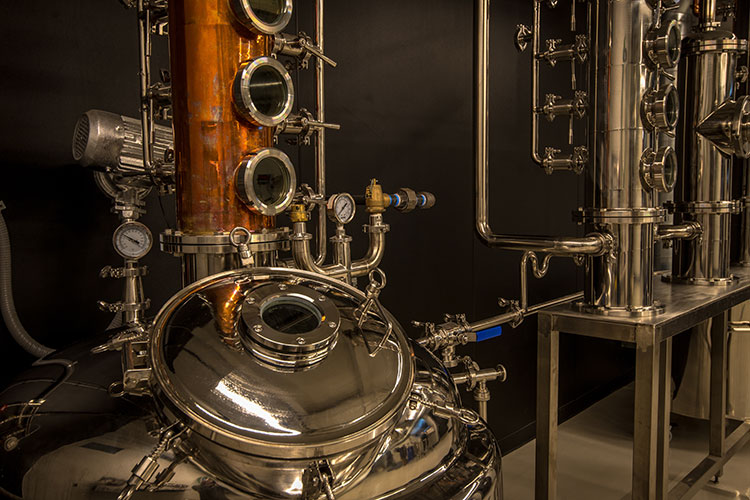 That’s evident in a cocktail called the Schrödinger’s Cat — the name comes from a famous thought experiment in quantum physics — which combines spiced cider and orange with Quantum’s first product, a rye vodka. Their next mission is gin, a considerably more complicated alcohol distilled with array of botanicals including piney juniper berry and floral orris root.

To assist them, the Kantos have assembled an expert panel conducting a battery of tests to pin down what Ryan labels the “organoleptic data” — terminology for how people respond to tastes and smells of his various experimental gins. The objective is to identify a new niche flavor profile for the spirit, and then have it in bottles by the springtime. 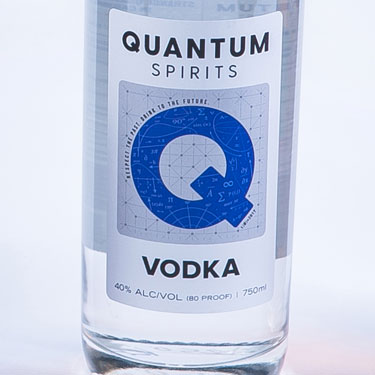 Bottle to Buy: Quantum Vodka
This vodka has a slight hint of dried fruit on the nose and a shade more grain on the tongue than one would expect, which the Kantos say comes from the rye it’s distilled from.  ($24) 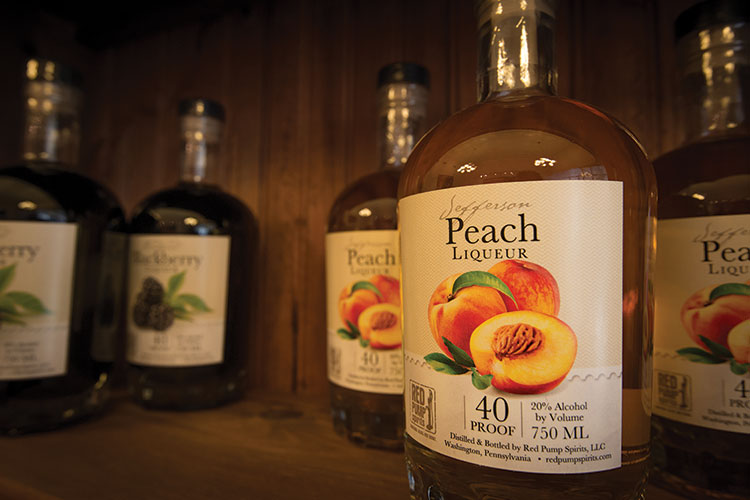 Ed Belfoure has a lot of experience with alcohol, though not the kind that you drink — an industrial chemist, he distilled butanol and propanol for plastics.  He also is well versed in winemaking owing to his Italian roots. His Washington distillery is in a Main Street shopfront, but Belfoure perfected his formula distilling fruit liqueurs in his garage. He ferments peach, blackberry and cherry juices into wine, then distills those to make eau de vie, a clear spirit that retains some of the fruit’s characteristic aroma and taste. 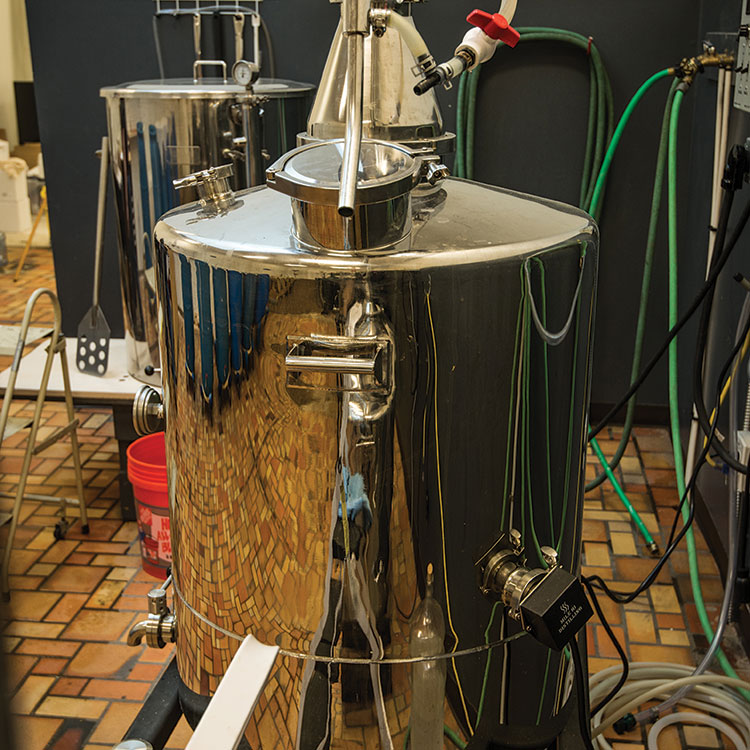 Having mastered those, Belfoure moved on to stronger stuff. His Farmhouse Whiskey, which has a picture of the house where Belfoure grew up on the label, is aged in an old rye barrel to acquire some of that spirit’s peppery zip.

A former Marine, Belfoure also taught chemistry at the U.S. Naval Academy in Annapolis. But his favorite chemistry class was in high school, where he met Judy, now his wife of 49 years. Ed handles the distilling, while Judy takes care of bottling, labeling, and, she adds with a smile, quality control. 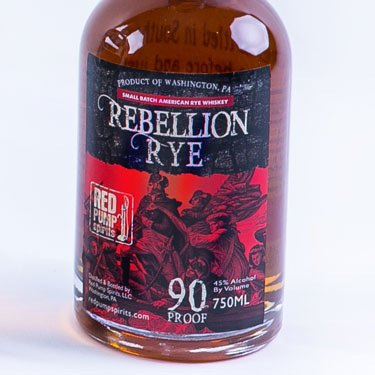 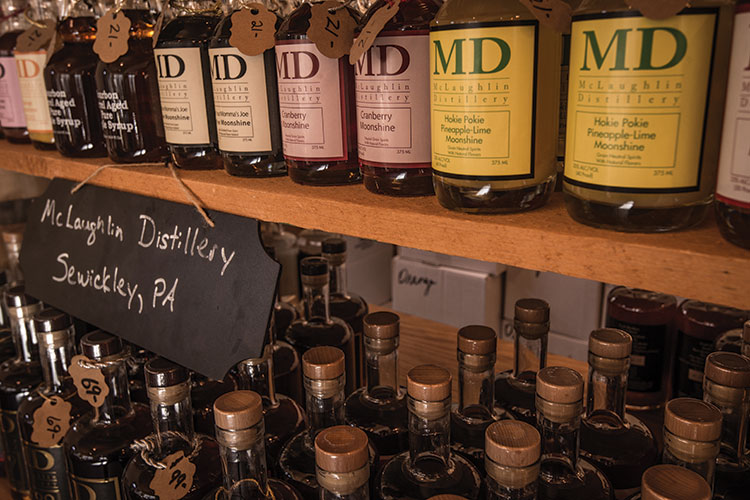 Kim McLaughlin seems happiest around wood. He used to be a dairy farmer in upstate New York, where the countryside is blanketed by thousands of acres of thick forest.  Now, the former Marine has a distillery hidden among the trees just off the Mount Nebo Road exit on Interstate 79. In it, besides distilling, he hews and coopers his own oak barrels from lumber culled from his New York land. McLaughlin has an old rocking chair with an oak cask in his tasting room that’s rigged up with a motor to keep it going for three weeks straight; sloshing around provides more contact with the wood, which rounds off the harshness of the young spirit. It’s a tribute to his dad, who made moonshine and always had a barrel tied to the back of a rocking chair. The resultant Grandma’s Rocking Chair Whiskey has a nose and taste like a whiskey-drenched woodshop. 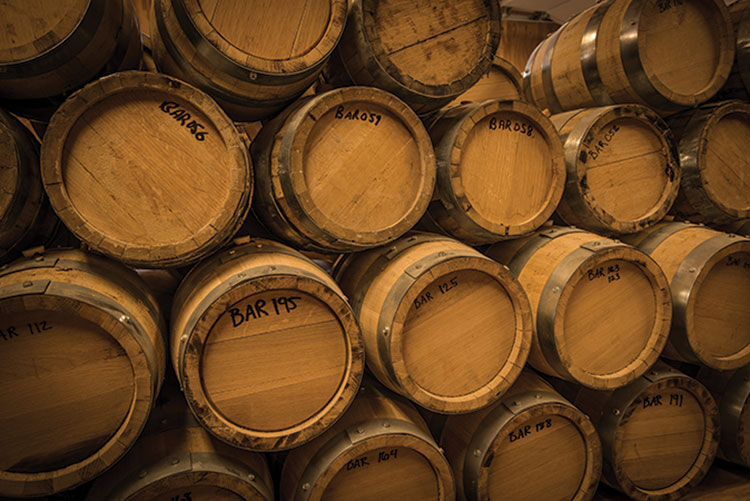 A bourbon man, McLaughlin crafts a spectrum of expressions, including a toasted applewood version, a buttery premium aged in 2.5-gallon baby barrels, and his smoky Devil Juice #5. He also offers a line of naturally flavored moonshines, including a pickle juice produced as a one-off for the Picklesburgh festival and discovered to have lasting popularity.

McLaughlin is an affable fellow, which is reflected in the logo on his labels — a giant “MD” — and if you bring up the fact that it looks a lot like the logo for the cheap jug wine known as “Mad Dog,” it just makes him grin even more. 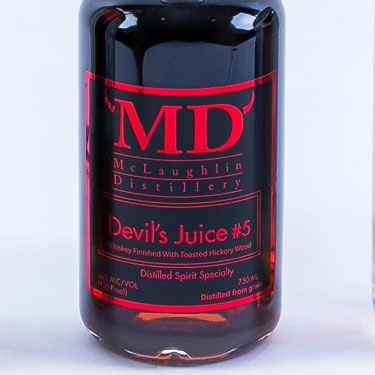 Bottle to Buy: Devil Juice #5
McLaughlin is proudest of this aggressive whiskey flavored with smoked hickory. It starts with a youthful bite accompanying a complex and vaguely bacon-y nose, then goes on changing and developing, with notes such as cigar and leather and vanilla long after you swallow.  ($55)

This article appears in the March 2018 issue of Pittsburgh Magazine.
Categories: Eat + Drink Features, From the Magazine, Hot Reads