4 Things to Know Before Heading to Heinz Field This Season 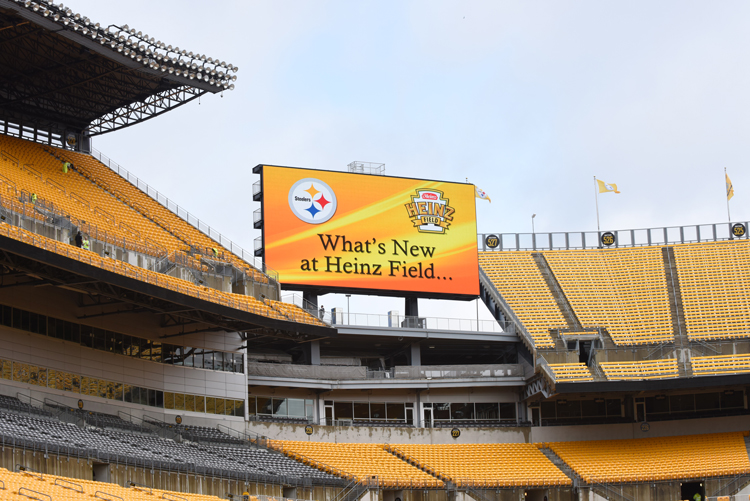 A busy summer in the ’Burgh is flying by faster than you can say Potato Patch, so we’ll forgive you if you’re floored by the following statement: Steelers football returns to Heinz Field Saturday night.

Don’t panic, now. Your jersey is in the upstairs closet where you left it last December. Sit back down. All is well.

The Steelers take on the Buffalo Bills in a preseason matchup Saturday at 7:30 p.m.; there’s a home tune-up against the Carolina Panthers scheduled for Aug. 28 as well. The home opener against Cleveland (and that new quarterback they have, ol’ whatshisname) is set for Sept. 7.

Before you don your layered black-and-gold apparel and head for the North Shore, though, familiarize yourself with these four Heinz Field changes for 2014:

1) There’s a second scoreboard now. The days of fans in the south end zone craning their necks to see replays are a thing of the past, as a second high-definition video board has been erected. The 35-by-73 foot display occupies the northwest corner of the stadium, so you’ll have a clear look at those highlights (and the out-of-town fantasy updates) from every seat in the building.

2) There will be an exclusive party upstairs. The new Bud Light Deck between sections 527 and 528 can accommodate 150 guests, offering an unparalleled view of the action, a private bar and great grub. If you want to join this group, though, you’ll have to rely on luck; every ticket for the Bud Light Deck will be given away via various contests and promotions. Try keeping an eye on Bud Light social media accounts and sniffing around displays at your local beer distributor.

3) You can even be productive at a Steeler game now. Looking to get some work done between the tailgate and kickoff? Well, check your priorities, buddy. Nevertheless, Heinz Field is now offering free WiFi access within the FedEx Great Hall and the West concourse. If nothing else, this means you can seriously step up your social media game — so keep snapping those selfies next to the (replica) Super Bowl trophies! (WiFi will be fully up and running in time for the regular season, so you may not be able to log on during the preseason contests.)

4) Yup — there’s new food. Lucky enough to be headed for a suite? You can look forward to indulgent grub like the “Burgher on a Stick,” a mess of ground beef, cheddar, relish and bacon encased in panko breading; it’s basically the corn dog in its ultimate form. Also available to suite patrons: a tour of AFC North hot dogs, with a kielbasa-and-kraut dog for Pittsburgh, a crab dip-topped dog for Baltimore and a Skyline chili dog for Cincinnati. (Nope, nothing for Cleveland.) Not suite-bound? Club-level ticketholders can grab carved turkey sandwiches, a reinvented Italian hoagie or the delectable bacon, egg and cheese hot dog. Throughout the stadium, Fox’s Pizza now is available, as well as the Chuck Noll-inspired “Emperor Burger,” featuring a beef patty, shaved kielbasa, onion-bacon kraut and secret sauce.

#TV: Wims to compete in tonight’s episode of “Food Fighters”


Years of informal and formal kitchen training prepared Elise Wims for her turn as a contestant on season nine of "Hell's Kitchen." The Diva Chef, as she came to be known, used chef Gordon Ramsay's blunt criticism to further fuel her desire to improve her skills.

Tonight she'll return to network TV in top form. This time, The Diva Chef will be one of the celebrity chefs squaring off with home cooks on NBC's new program "Food Fighters." The premise: Five professional chef contestants try to better prepare a home cook's specialities. The dishes won't be critiqued by sharp-tongued industry professionals, though: Average citizens, seated in dinner-party fashion, will weigh in on who did it better.

Tune in at 8 p.m. If you’d like to watch it all unfold with Wims, she’ll be having a viewing party at Cafe Notte, beginning at 7 p.m.