“Our experiences shape who we are, and if you haven’t lived it, it’s hard to relate to." 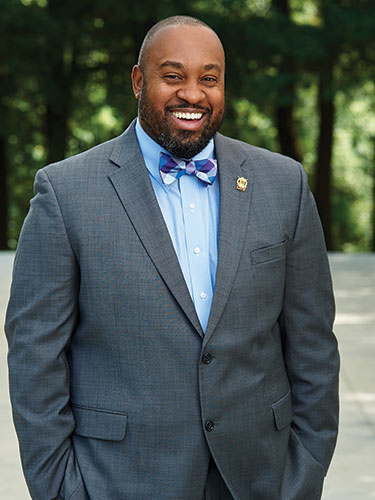 There are hundreds of minority athletes playing at 5A and 6A schools in Western Pennsylvania, but there are only two African American athletic directors leading the way: Sean Simmons at Pine-Richland and Ron Coursey at Woodland Hills.

“All people of all demographics need leaders to look to who have shared experience,” he says. “Our experiences shape who we are, and if you haven’t lived it, it’s hard to relate to.”

That’s particularly important in his role on the WPIAL Board of Directors, where Coursey is one of the first African American educators to serve. He’s found he’s not only able to champion issues of equity, diversity and inclusion, but he’s also able to give voice to underrepresented communities and students.

“I think it’s important that their point of view is heard,” he says.

In addition to his work with area athletes, Coursey is active with Omega Psi Phi, a historically African American fraternity. He co-chairs the annual HBCU tour, taking students on a nine-day trek up and down the East Coast to visit some of the nation’s top historically Black colleges and universities.