Judges point to family-friendly design and entertainment potential in choosing two distinct kitchens, both in the Strip District. 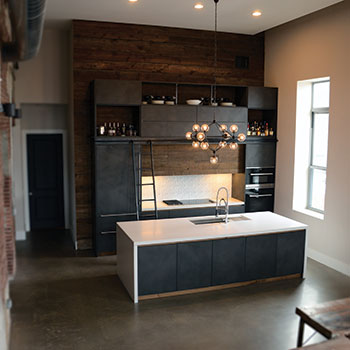 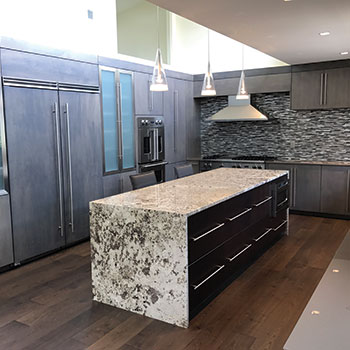 One kitchen is expansive, the other is compact, but both are designed with entertaining and family in mind. Despite their differences, they also have exquisite design in common, prompting Pittsburgh Magazine’s panel of judges to name them both as winners of Best New Kitchen 2017.

The panel of judges did not choose a 2017 winner from the field of entrants in the category of Best Renovated Kitchen. Instead, the judges favored these two kitchens, carved from historical buildings located on Smallman Street in the Strip District.

The kitchen at 2500 Smallman takes advantage of the abundance of natural light, creating separate yet cohesive work zones in the well-planned design, according to Paul Taylor and Jack Alan Bialosky Jr., two of the four contest judges. The kitchen in the Otto Milk Condominiums makes good use of the space available, and the design fits the character of the loft, they say, pointing out both the use of rough wood and polished surfaces.

The allure of a challenging project in the city appealed to builder Kent L. Koch, who designed and built the new kitchen found in one of the luxury homes located within 2500 Smallman, a renovated warehouse previously used as a trucking facility by Pitt Ohio. He has spent his career building single-family homes in the suburbs.

“I like to do different things, creative things. That’s where my passion is,” Koch says. “I don’t want to build the same thing over and over.” 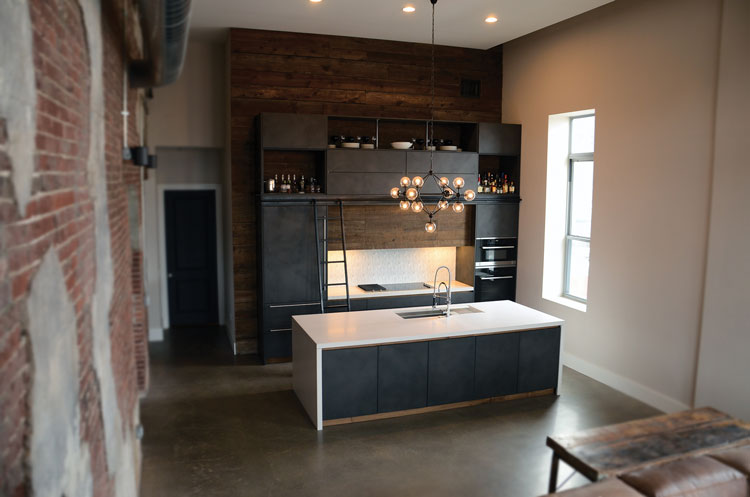 A Home with History

Graciela Bauza and Christopher Emond already lived in the Strip District, but they were looking for a home they could customize. They found it in the Otto Milk Condominiums, a 19th-century building that once was a brewery and later a milk-processing plant.

Sweeping views framed by expansive windows define the open living and kitchen area of their home. Bauza says she knew immediately they wanted to craft a kitchen that blended with materials in the home’s existing features, such as brick walls. 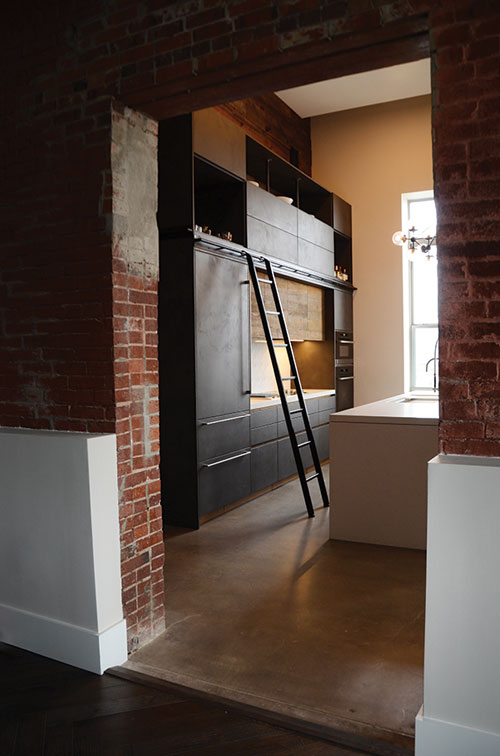 ​Luxe Home & Design, which has locations in East Liberty and Downtown, helped them to translate their ideas into a kitchen that includes concrete-faced cabinetry and a 9-foot custom ladder, created by Pittsburgh’s Iron Eden, to reach the 12-foot-high cabinets.

“It’s just what we wanted,” Bauza says of the kitchen.

Work on their home began in June 2016 and was completed by October, Emond says. They moved in on Oct. 15, he says. He declined to provide the cost of the project. 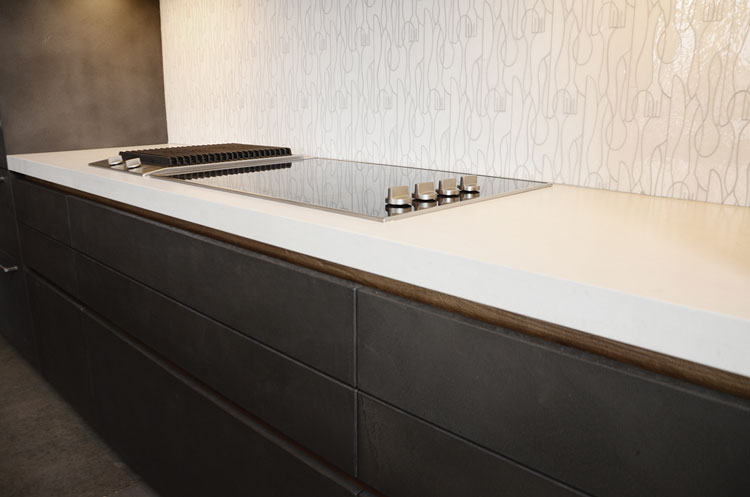 The homeowners helped drive many of the design details but worked as a team with Luxe co-owner Brent Hugus and designer Audrey Poplar, Hugus says.
Eggersmann USA, a German company, fabricated the concrete-faced cabinets in rich, dark grey. Pine from older homes that were demolished is used in part of the back wall, framing the cabinets.

​Luxe design technician Tyler Folnsbee says the kitchen offers more space than meets the eye. The cabinets run slightly less than 14 feet across the back wall.

“The cabinets themselves are big, so there’s more space than what it appears,” he says. 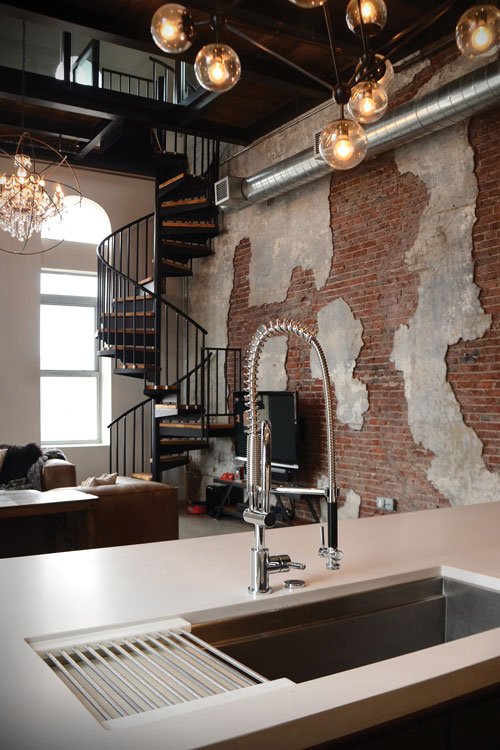 The efficient use of space also stood out to William H. Childs Jr., a member of Pittsburgh Magazine’s judging panel. “The finishes handsomely complement the architecture of the rest of the living area and also allow the kitchen to retreat into the background as a piece of built-in furniture,” he says.

“The library ladder is an elegant touch that makes use of the upper cabinets while also giving the entire composition an element of lightness to balance out the massiveness of the cabinets.” 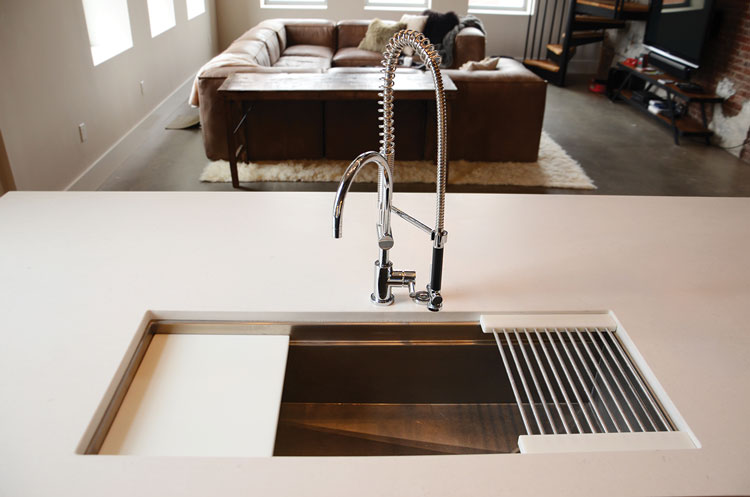 An island topped with Caesarstone quartz with a waterfall edge visually separates the kitchen area from a living area, which features windows offering views toward the North Shore. The compact kitchen features The Galley Ideal Workstation 4, an extra-large sink, that allows the homeowner to prep food and store utensils within it. 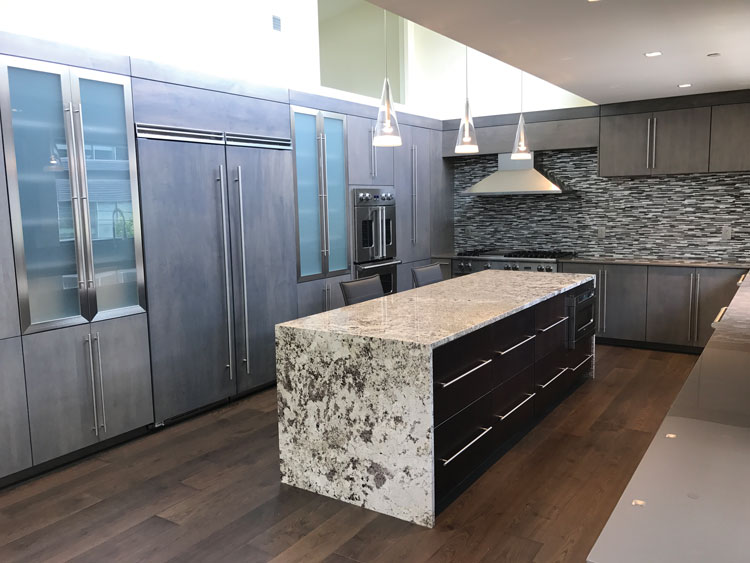 “I saw the space, and I thought, ‘I want to do this. This is an exciting project for Pittsburgh,’” says Sherman, who grew up in New York City. “The concept of having this in Pittsburgh, TriBeCa in New York, was very exciting.”

Koch and Sherman designed with a homeowner in mind — but not the eventual homeowner: As of press time, the home remains for sale, priced at $2.4 million. The cost for the cabinets, countertops and appliances was $121,900, Koch says.

“I didn’t know who the buyer was, but I didn’t have someone selecting materials, so I think when you are designing for someone you don’t know, you have to keep it somewhat neutral but you still have to have the ‘Wow,’” says Sherman, who owns selma b. sherman/interiors in Shadyside. “But all of the colors are neutral … Everything is super-functional.” 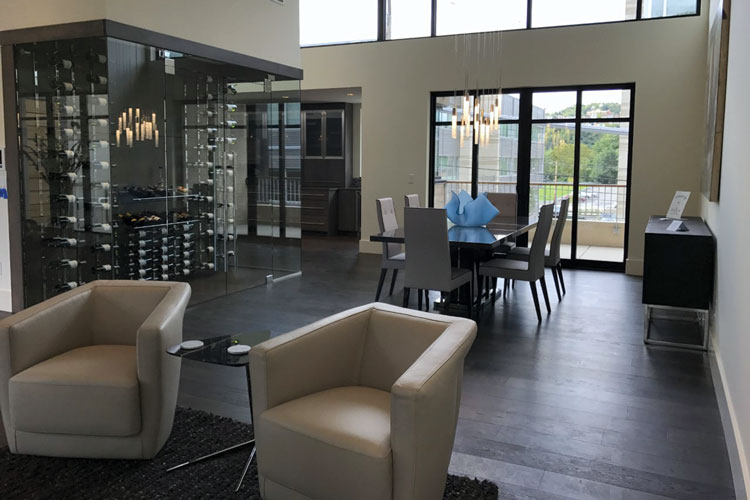 The home is one of 11 found in this former warehouse, in which different builders are developing the luxury units. Koch so far has developed two units.
The kitchen, lauded by Pittsburgh Magazine’s team of judges, is located on the second floor, a move Koch says he made to appeal to homeowners who want a larger area for entertaining. There’s also an outdoor living room and cooking area.

“Natural light is the real star of this kitchen,” Childs says. “So often, kitchens are relegated to second place behind living rooms in terms of exposure to natural light, despite the fact that for many families, the kitchen is the heart of the home.

“This design utilizes two different sources of natural light to truly bring the outside in and flood the space with daylight. The glass, metal and white surfaces multiply the effect by reflecting and scattering the light, creating a pleasant sense of openness.” 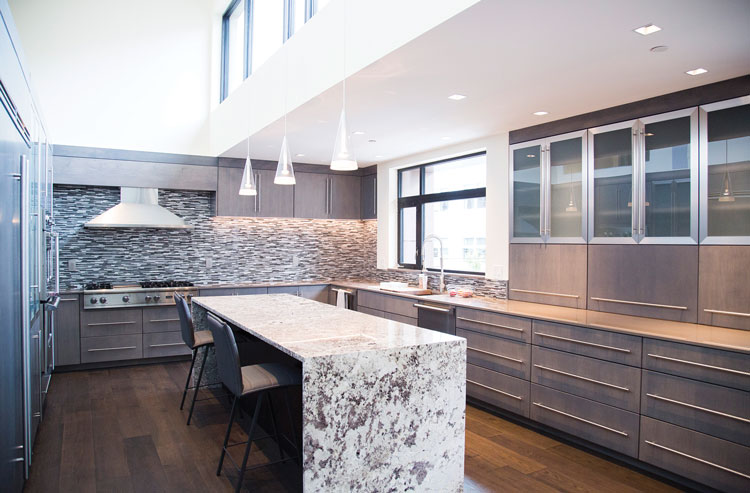 The kitchen, a classic U workspace, has a waterfall countertop on the island. Mike Santa, owner of Santa’s Kitchen & Home in Mars, built the maple cabinets, which are finished in grey stain and lacquered. Achieving a clean look presented challenges because the ceiling is different heights, Santa says.

The full-overlay cabinets also feature pullouts for ease of organization. Santa worked with Koch and Sherman to develop a design for the cabinets.
The backsplash has individual glass and metal tiles, which break the uniformity of the cabinets. 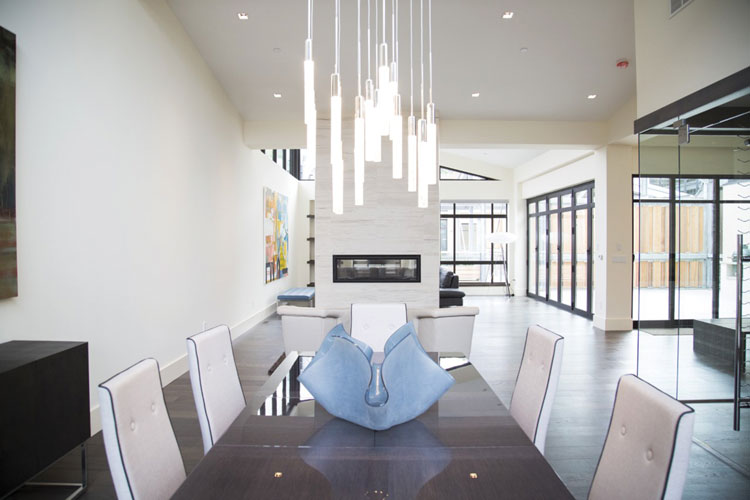 “Everything is layered and textured,” Sherman says. “When you are in an open and contemporary space, in order to keep it from being cold, you have to use warm woods and textures — layer it up with textures. That was what I was trying to do with the backsplash.” She says the “hard, cold” surfaces often used in contemporary design can be tricky to navigate.

“You have to be careful [when using contemporary design or] it doesn’t feel like a home,” Sherman says.

This article appears in the March 2017 issue of Pittsburgh Magazine.
Categories: Best of Design