Taking advantage of the topography, Michael and Michele Hills build a custom home in Lawrenceville with sweeping views of Downtown. 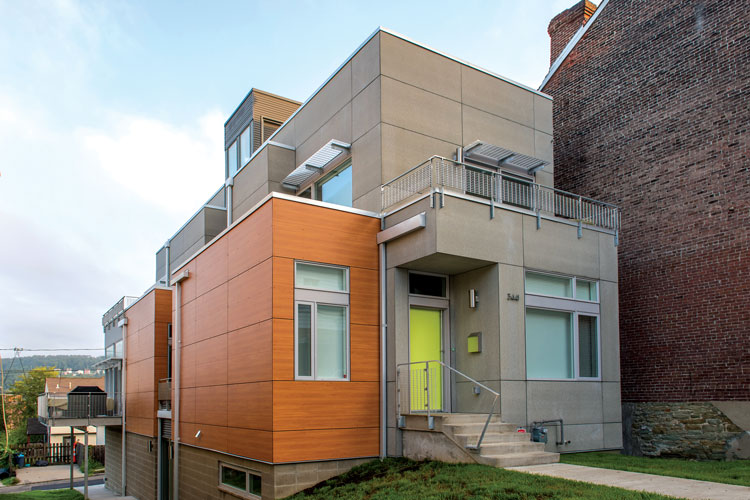 It’s hard not to get a happy feeling after crossing the “Hello, Beautiful” welcome mat and entering the lime-green custom door of Michael and Michele Hills’ home in Lower Lawrenceville. The bright and airy three-story dwelling features an abundance of large-scale windows, which fill it with natural light even on the greyest of Pittsburgh days.

“It’s like we have much more daylight than most people,” Michele says. “Marty (Marra, president of MM Marra Construction) told us when we were building it: ‘Your moods will be a lot different than everyone else’s because it’s so open, and you have a lot of light coming in — even in the winter when everyone is cooped up and crabby.’”

Then there’s the view. The white-walled home has outdoor decks on every level — including a rooftop patio — specifically constructed to enhance a surprisingly sweeping view of Downtown, Troy Hill, Lawrenceville, Millvale and Polish Hill. 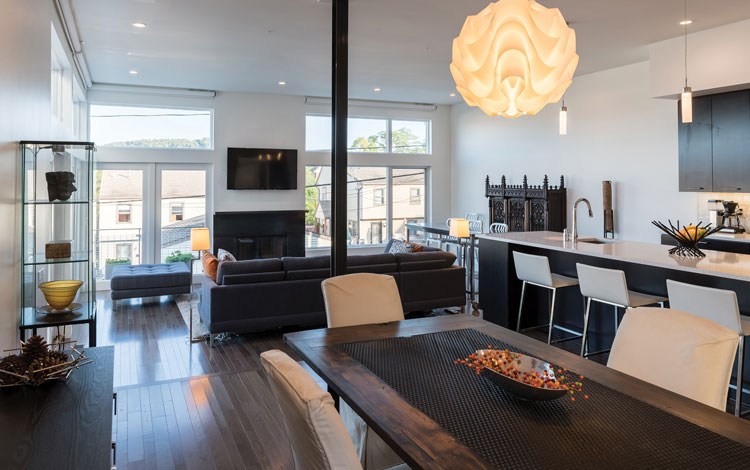 Michael says visitors often tell them they feel as though they’re in a beach house rather than in the heart of a historic urban neighborhood.

“When we were designing this house, I said, ‘I want windows, and I want windows on all sides,’” Michele adds. “I don’t want to live in a house that has them in just the front and back.”

The home’s careful design, clean, open floor plan and emphasis on outdoor space are among the reasons Pittsburgh Magazine’s panel of judges named it their 2017 Home of the Year for Best New Build.

“It maximizes the use of the sloping terrain, its forms are scaled well to the surrounding buildings, and the use of materials are a good fit the neighborhood,” Taylor says. “The massing of the design does a great job maximizing outdoor living space and prioritizing views.” 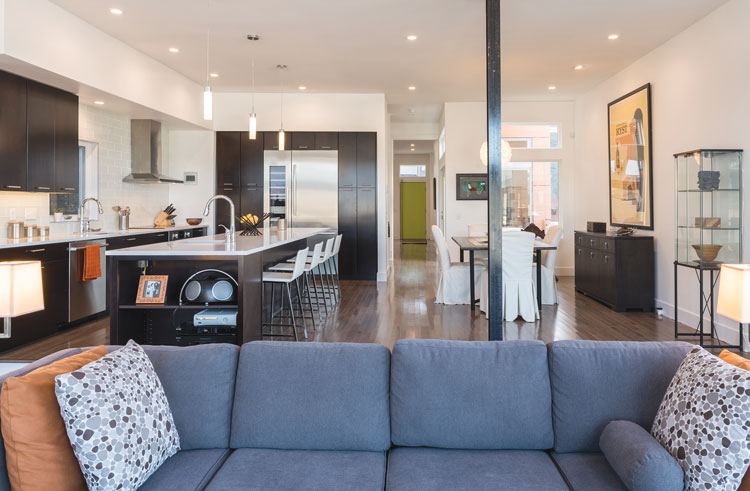 The home now occupies what was an empty lot on a sloping section of quiet Ligonier Street. Michael and Michele, who own a side rental/real estate development company, Swell Dwellings LLC, discovered the property after they purchased a duplex on the same street.

The couple already lived in Lawrenceville — in a church on 40th Street they purchased in 2002, renovated and converted into three condominiums — but they were looking to build a smaller home requiring less maintenance, in the same community.

Husband and wife say they wanted to stay in Lawrenceville because of its proximity to their jobs, as well as its many dining and entertainment options, and easy access to other neighborhoods.

“We love Lawrenceville,” says Michael, 50. “It’s great. You can walk anywhere. Sometimes, we come home from work on a Friday, and we don’t touch our cars again until Monday.” 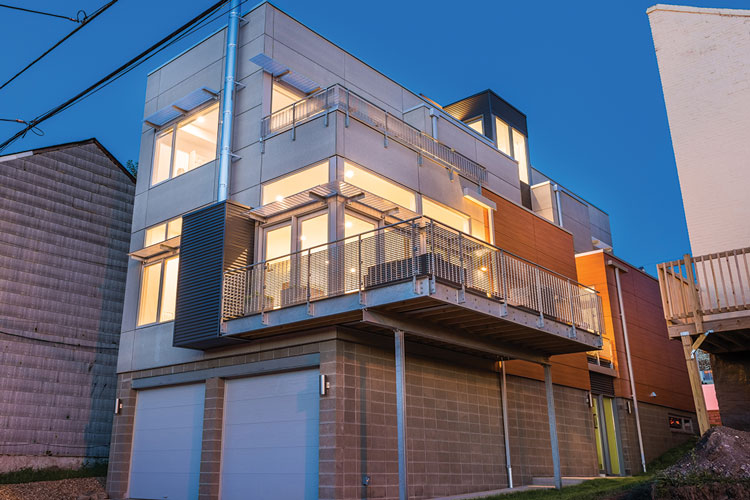 The vice president and general manager at Comcast Spotlight, Michael made it his mission to find the owner of the well-mowed grass lot on Ligonier Street, which at the time was not for sale.

“I tracked the gentleman down and called him and asked, ‘Are you interested in selling this lot?’ He said, ‘Nope,’” Michael recalls. “I said, ‘Well, what are you going to do with it?’ He [said], ‘Nothing.’”

The Hills learned the then-owner purchased the double lot many years ago and had torn down the dilapidated building that sat on it because his mother lived on the same street.

Fearful that an apartment complex would be built in its place and ruin the quiet nature of the area, the owner maintained he had no interest in selling the lot, even after Michael promised he would build a single-family home on the property.

Two weeks later, the owner called Michael back. He had changed his mind. “We couldn’t believe it,” says Michele, 44, a producer at KDKA-TV.
That was in 2012, as Lawrenceville was starting to explode as a hot housing market. For years, the couple sat on the property, mowing the lawn as their predecessor had done.

In 2013, they sold their 5,000-square-foot home in the sanctuary of the former St. John German Evangelical Lutheran Church and moved into temporary quarters at The Cork Factory in the Strip District while they planned their dream home.

To help them, they enlisted Lawrenceville-based mossArchitects, which had done many projects in the area, to design the building. At the architecture firm’s recommendation, they hired MM Marra Construction, located in the Strip District, to build it. In November 2015, the couple broke ground on the project. 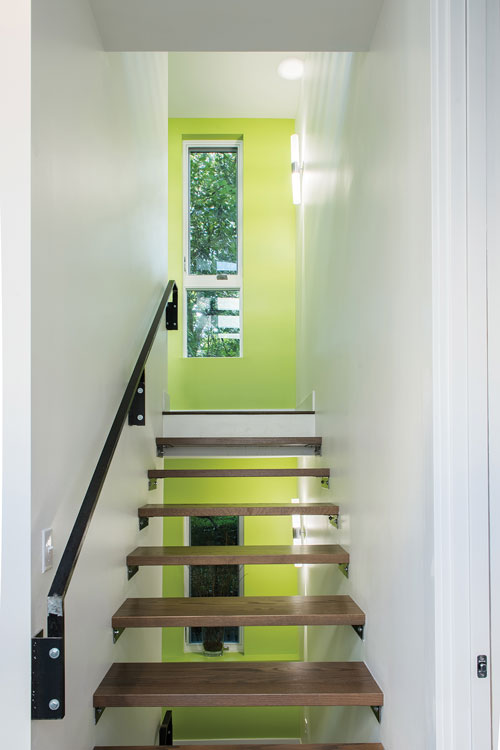 Rooms with a View

Andrew Moss, president of mossArchitects, says Michael and Michele, who didn’t use an interior designer on the project, came to the firm with definite ideas on how they wanted their home to look.

“They knew they wanted a modern home,” Moss says. “Some clients come to us and really don’t have much of an idea. These guys really did their homework.”

To maximize views of the city, they situated the house as far to the rear of the lot as possible. They also designed the primary living space toward the back of the house, where the best views are found.

“They did a good job taking advantage of the site that they had,” says Marra. “They located the house in a very advantageous way to maximize all of the viewing potential that it has.”

After living in the church — which was built in 1896 and required constant maintenance — the couple desired a more efficient home. Michael notes it used to take them half a day to change a light bulb in the pendants suspended from the church’s 38-foot-high ceilings.

“Any normal maintenance was five times harder,” he says. “It had tons of dirt and coal dust in the attic. It was just a dusty building.”

With that in mind, Darren Lloyd, Moss’s lead architect on the project, designed the home’s exterior with durable phenolic resin panels, which look like wood but are thermally fused sheets of Kraft paper with resin. The home’s custom deck railings and exterior sun shades were created using aluminum bar grating and galvanized steel flat bar.

“We played into the clients’ request for a low-maintenance home with exterior materials that have very little required updates,” Lloyd says. “The finishes don’t require regular maintenance.”

The raw steel flat-bar material also was used to create the railing for the interior floating staircase, which connects all levels of the 3,557-square-foot home. The building’s main entrance has a commercial steel door with the kind of long handle typically found on a retail glass door. 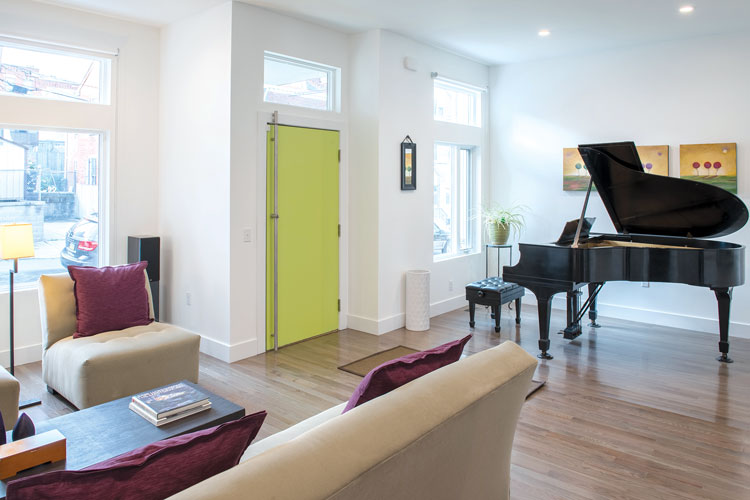 “The house is very open, but at the same time they’ll be able to close off certain pieces of it,” Moss says.

Because an alley runs behind one-way Ligonier Street, the couple was able to include a tandem garage and parking pad in the basement level of the home.

“You could put a garage in, which in this neighborhood is like gold,” Michael says.  The first floor also contains a full bathroom and a third bedroom, which the couple uses as a gym.

On the second level, the family room — which is slightly lower than the open kitchen and dining room — has a wood-burning fireplace with a unique steel front designed by Lloyd. A large deck is located off the family room. Automated, opaque blinds on the floor-to-ceiling windows give the couple privacy.

“Even in a dense urban environment, we were able to provide great outdoor living,” Moss says. “Every room in the house has some sort of natural lighting, which was very important to us.” 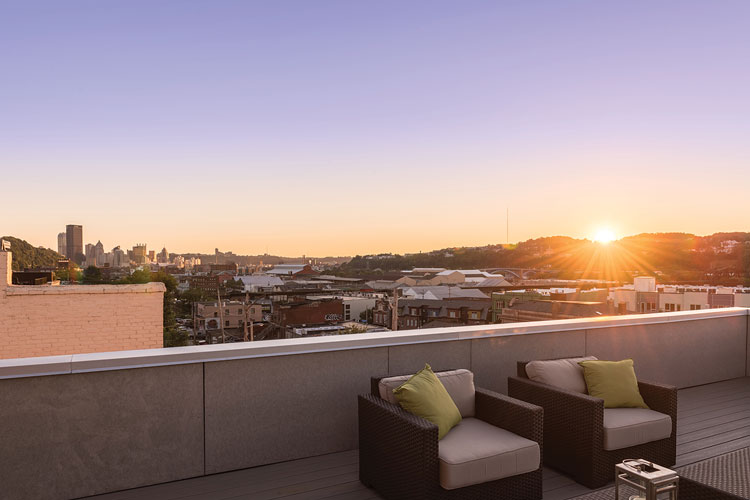 The third level contains a guest bedroom with its own deck and a full bathroom. There’s also the master bedroom, which has a clear view of the city. Michele says she and Michael are able to take in amazing sunsets, as well as incoming weather, from the deck, which Michael calls the “morning-coffee” deck. They also catch many of Pittsburgh’s fireworks shows.

“It looks like a Lite-Brite at night,” Michele says of their view of Pittsburgh’s skyline. “I think most people are really surprised that a house in Lawrenceville has a view of the city.”

The highest level contains Michael’s telescope and a large rooftop deck with a hot tub. In the future, the couple plans to add landscaping to the home, including flower and vegetable gardens. Now that they have their dream home, the Hills, who moved in on Memorial Day weekend in 2016, have no plans for any future renovations — and no plans to build another home. They declined to disclose the project’s cost.

“This is it,” Michael says. “We are never going to move again.”

This article appears in the March 2017 issue of Pittsburgh Magazine.
Categories: Best of Design