The owners of our New Build winner want their space to incorporate nature as much as possible – and their wish is granted in more ways than one. 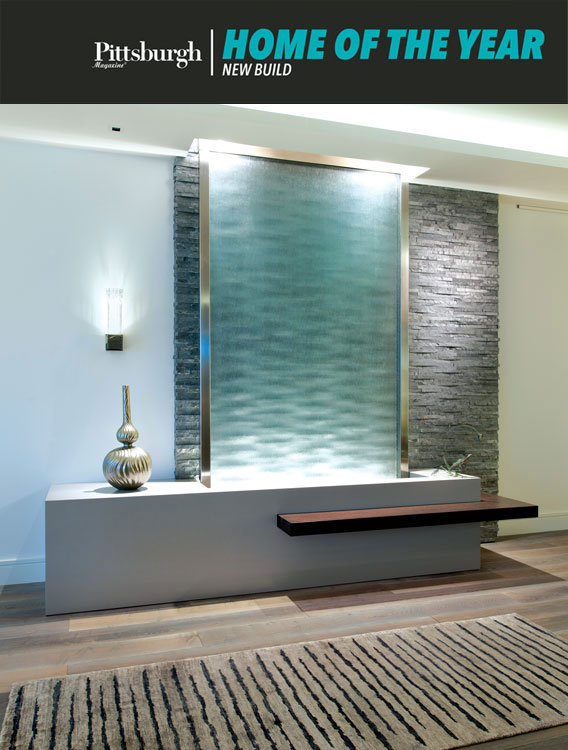 A waterfall feature made of stone, quartz, wood, stainless steel and glass is the focal point of the home’s great room. Photos by Craig Thompson

Visitors who walk into Pittsburgh Magazine’s Home of the Year 2016 winner in the New Build category are greeted by the sound — and sight — of a waterfall.

The co-owner of the condominium in a Downtown residential building is a landscape photographer, and she and her husband sought to bring the outdoors into the urban space they purchased as an unfinished shell. Their designers recommended an indoor water feature.

Ross Township-based Kitchen & Bath Concepts — which handled the space planning and custom casework for the home — along with interior designer Randy L. Snell of Archetype Design Studio, also in Ross Township, proposed a 5-feet-wide, asymmetrical cascade built into the wall of the great room. Materials including stone, quartz, wood, stainless steel and glass were incorporated into the fixture. That waterfall is part of a motif echoed throughout the home in various finishes.

“I was a little concerned — it felt like a novelty accent that would wear off after a while and become annoying,” says the woman resident, who, with her husband, requested not to be named. “But it’s been quite the opposite. I haven’t gotten sick of it yet.”

She says the final product exceeds her expectations, and she plans to add a living garden underneath.

The homeowners say they wanted the majority of the space to reflect an organic feel throughout its rooms. Soft tones of turquoise and lime green are sprinkled throughout, and the Home of the Year judges noted that the color scheme, as well as angles and lighting used throughout the home, tie the whole space together.
Home of the Year judge William H. Childs of William H. Childs Jr. & Associates, Inc. architecture firm says the home shows a “good use of materials” and “nice composition overall.”

“I think it was really well done,” he says.

In the master bathroom, another major water feature again echoes the influence of nature: A ceiling-mounted tub filler emulates a waterfall.

The homeowners purchased the property in February 2014 after previously living in another unit in the same development, so they came into this project knowing the potential hurdles they’d encounter. They had experienced the limitations on available light in a Downtown condo with windows on only one side of each unit, so they asked their designers to make the best possible use of natural light in their new home. 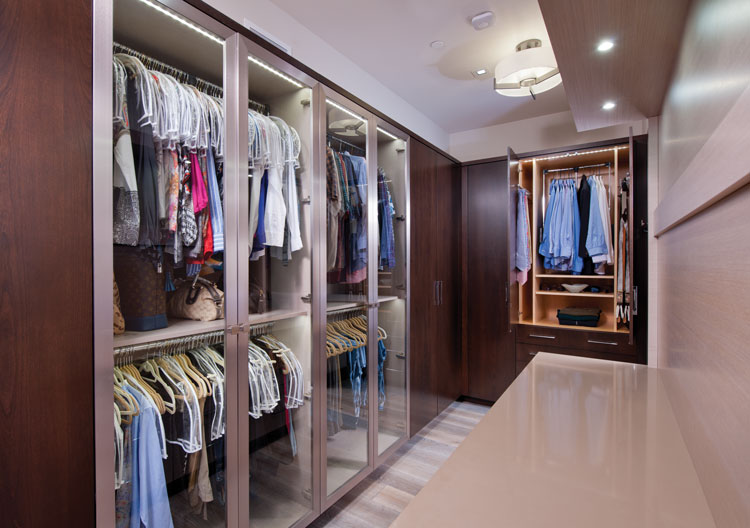 The spacious closet in the master bedroom suite has separate spaces for his and her clothing.

The design team for the project included Snell, certified kitchen designer Emily Miller of KBC, KBC President and General Manager Tommy Trzcinski and certified master kitchen and bath designer Tom Trzcinski. To accommodate the homeowners’ request for more light, the team designed and strategically installed transoms in water closets in the master bathroom, and the master bedroom and bathroom share frosted glass windows and doors for added light. The couple’s office near the front door — located farthest from the windows — contains a transom leading from the kitchen as well as a glass wall. In the guest bedroom, which had no natural light, two faux windows made of back-lit frosted-glass panels, complete with blinds and draperies, create the illusion of an exterior wall.

Another lesson the owners learned while living in their previous condo was to install an exhaust fan above the stove. Their only option to do so here was to engineer a custom system within the duct work venting through the side wall — an advantage of living in a corner unit.

“They took the opportunity to make [the cooktop vent hood] a piece of art,” the homeowner says of KBC.

Miller says designers used the veneer sucupira, which has a silver glaze, on the stove’s hood to complement many other features in the room. Polished chrome is the dominant metallic finish throughout the home, accented with brushed stainless steel and anodized aluminum. The cabinetry on the main kitchen island is covered with a Paldao veneer, which Miller notes has a unique graining and coloring.

“One thing that was great about [the homeowners, because] they were kind of open to new ideas, that really allowed us to push the envelope with some very unique finishes and introduce some different exotic veneers,” she says.

Snell incorporated petrified-wood end tables in the living area to contrast other finishes in the space such as chrome and glass.

“[The woman resident] liked a lot of [natural elements], but she also wanted a clean, more contemporary look,” he says. To contrast the pops of turquoise throughout the space,

Snell placed neutral colors, such as soft greys, into the upholstery, rugs and flooring.

The grain of the granite running through the kitchen bar flows in such a way to resemble a waterfall. That was another feature the homeowners desired to echo a natural feel — and one that stood out to the Home of the Year judges.

Childs says the bookmatching effect — achieved when the grain of the stone sections perfectly match, although separate pieces are placed end to end — is impressive. 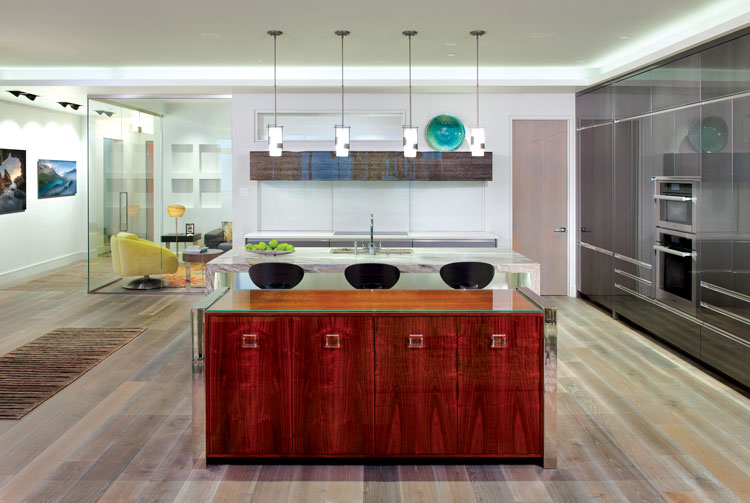 Kitchen countertops are free of clutter as everything is hidden behind seamless panels and doors.

“That’s tough to do,” Childs says.

The homeowners say the kitchen initially had been designed around a one-of-a-kind granite piece that resembled wood grain for the island. When they went to see the piece in person, they found there were several imperfections in the material, so another similar piece was selected.

The shower in the guest bath has a rainshower head, and the powder room incorporates organic elements as well. The porcelain tile has a textured wood pattern; a living-edge walnut countertop, in which the wood grain is visible, flows into a river-rock bed under the sink. A bamboo acrylic panel hides the toilet.

Construction started on the project in September 2014; the couple moved into their new home in July. They declined to provide the project’s cost. Originally, the space was intended to be two units, but, as many other homeowners in the building have done, the couple decided to combine the units into one, 3,000-square-foot space.

“On a project of this size, there’s a lot of space to have a hiccup, and this was the least painless, most well-thought-out [process],” the husband says.

“We started by gutting the whole thing, and KBC started with a blank sheet of paper.”

The husband requested a gallery wall to display his wife’s photography, and she requested many “niches” and built-in shelves throughout the space to hold whimsical art pieces they have collected in their travels.

The woman homeowner also told KBC she wanted the opportunity to hide wires, clutter and electrical outlets. The result? Everything in the home is behind seamless panels, sliding doors and drawers that disappear when shut. Frequently used appliances in the kitchen are hidden behind the stove backsplash, made of sliding panels of painted glass. A spice rack is built into a drawer, as is a knife block. The couples’ plateware has its own drawer with sections built in for each size of dish. The “brain” of the house — a Control4 automated home system that controls everything from the stereo to the lighting to the temperature — is hidden in the pantry.

“That’s the kind of attention to detail these people have,” the homeowner says of KBC. “I said, ‘I hate wires’ … it’s like they had a magic wand.”

The gourmet kitchen functions well for everyday food preparation as well as entertaining. A custom-figured walnut buffet provides ample storage, and the wine cooler and bar are hidden behind retractable doors.

“This storage in this place goes on forever,” she says. “It really does pay to be able to start from the ground up and get everything you wanted.” 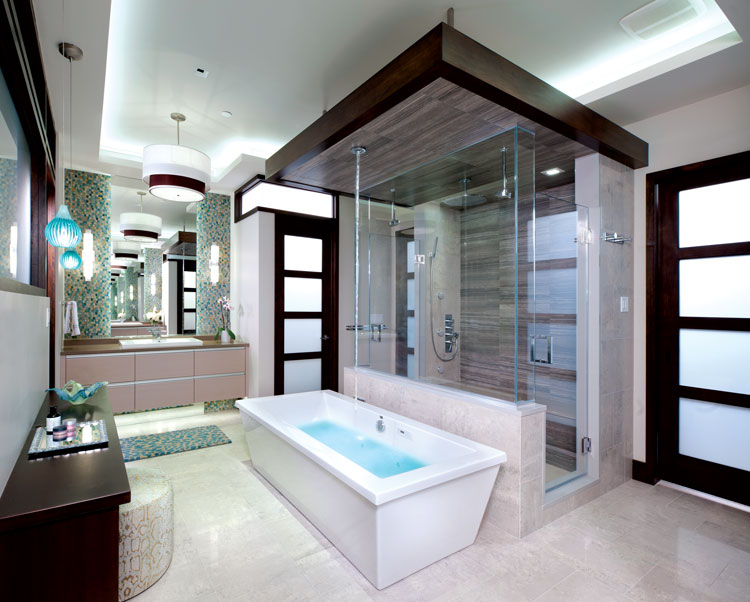 The home’s color scheme carries through into the master bath, which features a ceiling-mounted tub filler.

Deserving Design
Our Home of the Year judges also honored the master bathroom in the New Build condominium for its waterfall tub, warm undertones of blue sprinkled throughout and overall composition.

“I thought the floating vanities and soffit lighting and the ceiling over the shower all were the same theme — it made it feel like [the ceiling] was floating,” says judge William H. Childs. “It gave it another sense of ambiance.”

Emily Miller of Kitchen & Bath Concepts says the drop ceiling over the shower wasn’t planned. The waterfall feature for the tub would work only if the ceilings were 8 feet high, and the ceilings originally were 10 feet high.

“This suspended detail that came out ended up being a really cool architectural element, but it came from pure function,” Miller says.

Childs also praised the rectangular forms in glass panels used on all of the doors — those in the water closets as well as others leading from the bathroom into the walk-in closet and back out into the master bedroom.

“You could have put a solid or four-panel door, but they did that to keep the feel of the rectangular geometry,” he says.

In the bathroom, designers built special drawers in the vanity to accommodate a request to hide cords, wires and other items that could potentially clutter the space. The drawers contain space for makeup, toothbrush and other toiletries as well as outlets and nooks for wires to run through.

Pittsburgh Magazine’s judges aren’t the only ones who deem the bathroom to be worthy of praise. In January, Kitchen & Bath Concepts won a first-place award for the project from the 2016 National Kitchen & Bath Association Design Competition in the large-bathroom category. 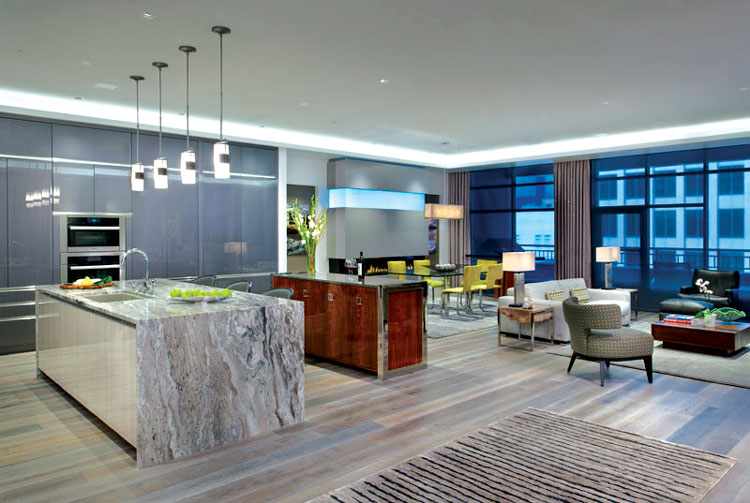 This award-winning kitchen was designed with various veneers and specialty materials.

Quality Kitchen
The functional yet sleek kitchen space in the condo features various veneers, retractable doors to hide appliances and specialty materials that impressed our Home of the Year judges.

The open-floor plan allows for two islands: The main granite counter as well as a smaller buffet that separates the kitchen from the dining room space. “The kitchen has clearly been designed to be the social hub of the dwelling yet maintains a clear distinction of the uses for each of the counter surfaces, which themselves become individual pieces of furniture placed within the unpartitioned entertaining area,” says judge Westleigh Harper of Horton Harper Architects.

One wall of the kitchen contains most of the major appliances, including a steam oven, single convection oven, warming drawer, refrigerator, storage space and wet bar — which includes a wine cooler and sink with a water heater to create instantly hot water for tea or cocoa.

Harper says it is obvious that the design is meant to conceal the “often visually disruptive refrigerator and pantry space.”

“Great efforts have been made … to create a consistent, slightly reflective backdrop to the kitchen itself, while the absence of overhead cabinetry further simplifies the space,” Harper says.

Kitchen & Bath Concepts also won a first-place award for this project from the National Kitchen & Bath Association Design Competition in the medium-kitchen category.

This article appears in the March 2016 issue of Home & Garden.
Categories: Best of Design