Weisshouse owner Stacy Weiss partners with her contractor husband, Will Carpenter, to turn a former garage in the heart of Shadyside into a stunning, modern dream home. 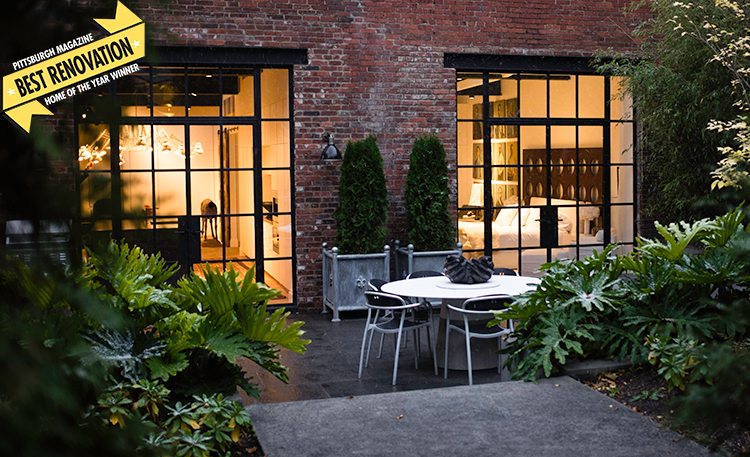 There was a time when Will Carpenter and his wife, Stacy Weiss, needed a two-and-a-half-story, five-bedroom house in Squirrel Hill. With five children in their blended family, they needed all of the space they could get. But as the kids became adults, moved out and forged their own lives, the couple desired a home that would reflect a new status: empty nesters.

“We were looking for one-floor living and something to renovate,” says Weiss, who owns Weisshouse home-furnishings store in Shadyside. “We knew we wanted to stay in the area.”

That turned out to be easier said than done. The couple wanted a loft-style home but had difficulty finding one that fit their criteria in the area. Other must-haves: a building with character, lots of natural light and high ceilings.

Then they found The One, the home that ticked off every item on their list. 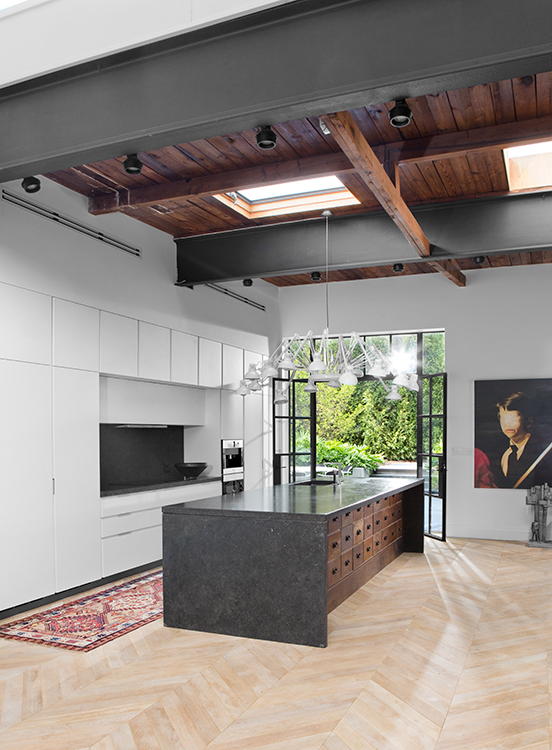 Nestled on a residential street in Shadyside, the former mechanic’s garage had been turned into a tile showroom in the 1960s. For years, it served as a live-in residence and studio for artists.

Although the space was mostly raw, Weiss says she loved it right away.  Carpenter, who owns Carpenter Construction, took a little more convincing.

“Because of what I do, my mind sees money,” he admits. “I know what it costs to do all this stuff.”

Still, he trusted his wife’s vision for the barren building. With his experience as a carpenter and Weiss’s skills as buyer for Weisshouse, he saw an opportunity to create something special.

“I knew what it could become just seeing the rough space and knowing what we could do,” Weiss adds.

Thus began a $500,000 renovation process that lasted nearly a year.

As advocates of environmentally sensitive construction, Carpenter and Weiss believe in reusing structures and objects in ways that echo the original intent as much as possible.

The couple moved into the 2,800-square-foot space in June 2013. When they started construction several months later, they embraced the original wood-and-steel ceilings — including steel beams Carpenter says were forged at the Carnegie Steel Works — as part of the home’s unique history.

A clerestory and skylights that had been added to bring in light to the art studio were only “freshened up.” A tile floor also remains in the den, which once was an artist’s bedroom. 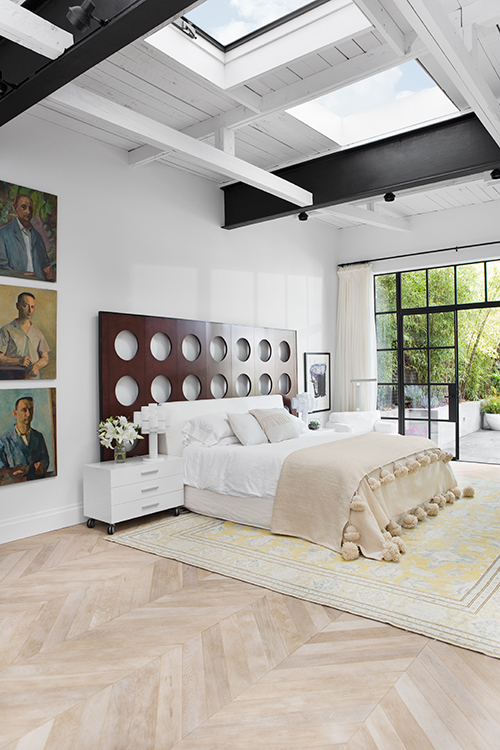 “This floor is actually the only thing left from when it was a tile showroom,” Carpenter says.

Mary Cerrone, who served on the panel of judges for Pittsburgh Magazine’s Home of the Year contest, praises the home’s use of natural light, which brightens the open living space on the cloudiest days.

Home of the Year judge Nancy Drew says she appreciates that the couple chose to refurbish original elements rather than gut the building, which dates back to the early-20th century.

Still, the couple had no qualms about restructuring the home’s layout.

While Weiss dreamed up new interior rooms and plotted exterior renovations, architect Stuart Horne of the Seigle Solow & Horne firm in Pittsburgh worked out her plans and made scaled drawings for Carpenter’s construction crew.

“They have more of a strong design and construction background than the average client, so it was more of a collaborative effort,” Horne says. 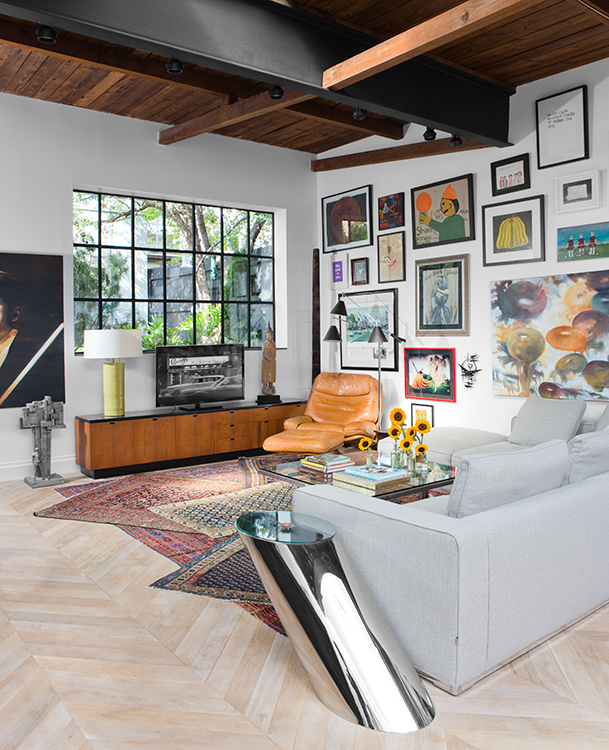 Among the biggest changes were the large openings punched through the back of the building and outfitted with custom glass-and-steel windows and doors. The framing pays homage to the home’s past life as a commercial building, Carpenter says. Insulated window glass creates a more energy-efficient space.

The industrial theme carries into the master bathroom and its walk-in shower with glass-and-steel doors, similar to those added to the back of the house.

Because she and her husband have no intention of moving, Weiss jokes that she designed the shower, which includes a steam room, with the future in mind. 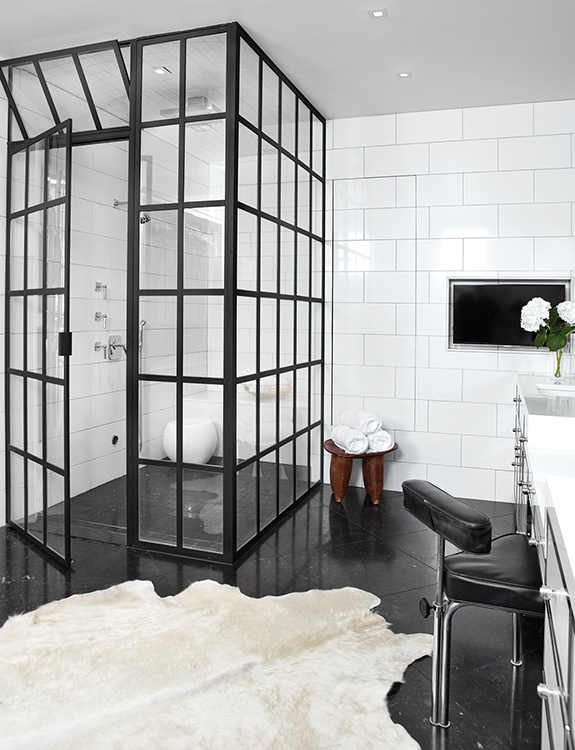 “I told Will [that] I want us to be able to wheel into the shower and then wheel out,” she says with a laugh.

The master bath, formerly a studio with brick walls and cement floors, now is outfitted with arabesco bronzino slab in a warm gray tone.

“They’re very painterly,” Weiss says of the slabs she found during a trip to Connecticut. “I loved that it’s gray, but it has a touch of bronze to it.”

Weiss also made distinctive choices in the expansive guest bathroom, incorporating on the walls bold green, white and black encaustic cement tiles made in Mexico.

“It reminds me of an Escher drawing,” Carpenter says. An antique mirror in the shape of the famed Venus De Milo sculpture adds vintage flair to the room.

Weiss’s interest in reclaimed furnishings is evident throughout the home.

The guest bathroom features an antique butcher’s freezer from Europe that Weiss turned into a vanity by adding fixtures and a sunken sink.
In the kitchen, the couple used a salvaged apothecary chest coupled with Poliform cabinetry to create an oversized island. The piece is topped with 2-inch-thick Belgian bluestone.

Separating the kitchen and living area from the master bedroom is a pair of antique doors from England. After finding the doors at an auction, the couple stripped off layers of dark-green, brown and yellow paint and fused them to make one larger door. 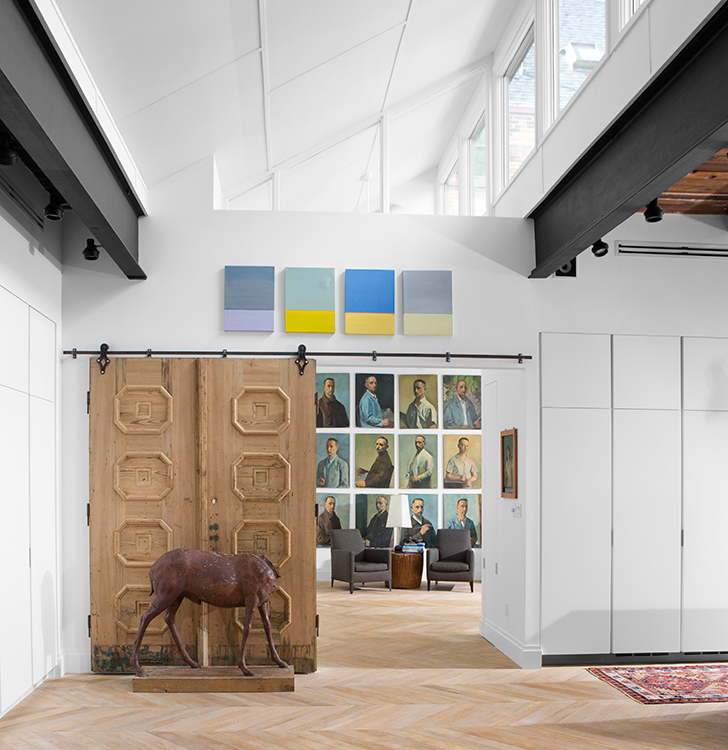 By mounting the piece on the wall and using a track and barn-door hardware they bought on eBay, they created a sliding door.
Installing the light-oak floor laid in a chevron pattern was a first for Carpenter.

“I have to admit — I’ve done thousands of floors, but when she first said it, I didn’t even know what she meant,” he says.

“I like the pattern and that it’s antique-like,” Horne says of the pattern. “It makes the space seem twice as large as it is.”

The Poliform/Varenna kitchen cabinetry is an environmentally friendly Italian line carried by Weisshouse. Fashioned with recessed handles, the cabinets hide built-in appliances, including the refrigerator and dishwasher.

“I knew the kitchen was going to be exposed to the rest of the room, so I wanted it all to look more like cabinetry,” Weiss says.

For privacy, the couple planted large arborvitaes to separate the outdoor space from the alley and a parking space. Black bamboo also marks the edges of the property.

Le Gall says the cool, urban space is a marked departure from the yard’s condition before Weiss and Carpenter moved in.

“It was just a big open space, and there was an ugly fence,” he says. “We took that out and created this intimate space for outdoor entertaining and dining, with planters and flowering trees and privacy.” 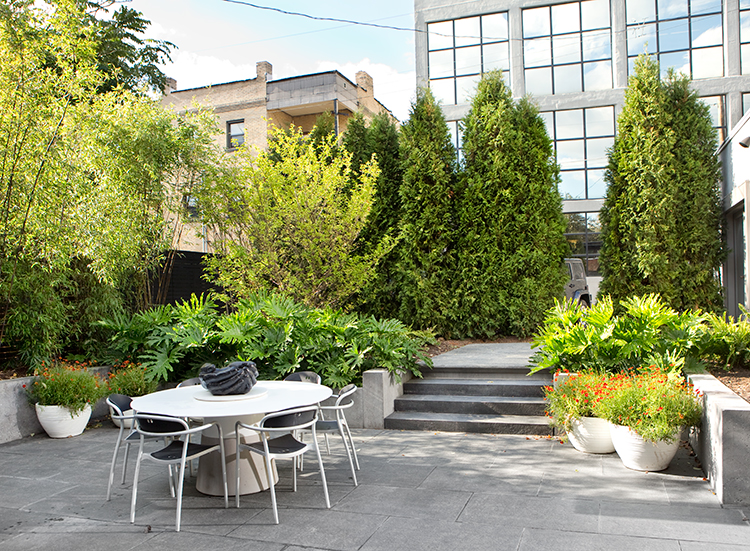 The courtyard now is a popular gathering spot for friends and family. Weiss and Carpenter even held an engagement party for Weiss’s eldest daughter over Labor Day weekend at their home.

“We were hammering until the day before [the party] and still doing stuff, but we got it done,” Weiss says.

​Cerrone says she appreciates how the landscape design makes the most of a small outdoor space.

“I like how much of the outdoors comes inside,” she says. “They really took advantage of the greenery outside.”

The house is blocks from Weiss’s store and only a short walk from Whole Foods, coffee shops and Shadyside businesses. She and Carpenter say they love their little slice of heaven paired with the convenience of living in a busy Pittsburgh neighborhood.

“This is city living,” Weiss says. “You can’t get more urban than where we are.”

This article appears in the March 2015 issue of Home & Garden.
Categories: Best of Design