Boundless energy, creativity and ambition are the hallmarks of every successful chef, and Brian Pekarcik, 36, clearly has these traits in spades. 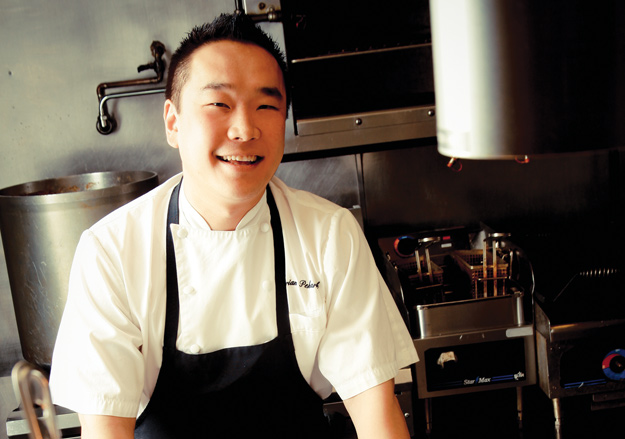 Brian Pekarcik helped to open two concept restaurants within months of each other in fall 2010: Spoon and BRGR Bar, both located in East Liberty.

Brian Pekarcik’s forward momentum has been on overdrive since he partnered with Rick Stern, part owner of Willow in the North Hills, to open Spoon in July 2010.

Driven by a culinary philosophy and a set of technical skills honed at outstanding West Coast restaurants like Gary Danko in San Francisco, this native son is most definitely making his mark.

The phrase “upscale comfort food” is a cliché, but this kitchen reminds us why the concept took off in the first place. Many of the dishes here are flavorful, soul-satisfying and quite rich: Consider a decadent bacon-and-eggs appetizer with five-minute poached egg, crispy pork belly, asparagus and hollandaise or the delicious poblano-chili rellenos stuffed with polenta, shrimp and pepper-jack cheese served with charred tomato vinaigrette. However, a light, elegant touch also comes into play in such dishes as heirloom tomatoes with fresh burratta cheese, tomato water and tomato gelée, and horseradish and crab-crusted salmon.

Being back on home court is clearly inspirational for Pekarcik, who returned to the region two-and-one-half years ago.

“Especially during spring, summer and fall, western Pennsylvania is as good as anywhere in the country for local ingredients,” he says. “With only 10 appetizers and 10 mains, I want to keep things fresh and interesting, so every day might bring change to a few dishes depending on what I can source.” While Pekarcik steers the kitchen at Spoon, he’s also responsible for the food at BRGR, the very successful gourmet-burger bar, which opened next door in October 2010. “The two concepts are very different, but they complement each other,” he says. “I just try to make sure that a lot of my ingredients make sense for both places.”

Is keeping track of two places too much? Not for this energetic father of two. “Thinking about my menus starts with my cup of coffee in the morning,” he says. “For me, it’s a lot of fun.”