When it comes to Kevin Sousa’s passionate culinary point of view and unique menu, you may love it or hate it. 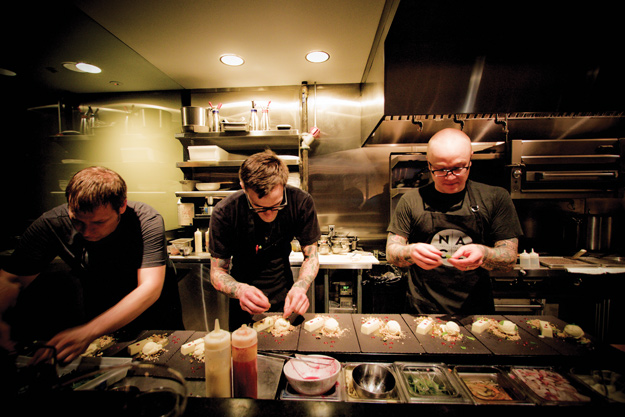 Kevin Sousa (right) works on the line at Salt of the Earth, Garfield.

No matter your take on Kevin Sousa’s approach, you have to admit that he didn’t open just one more Pittsburgh restaurant to vie for our cash by serving the same familiar plate of seared ahi tuna.

Sousa, 37, consistently comes up with dishes that manage to surprise and satisfy—for example, a dish of Arctic char with couscous, pomegranate, coconut and cheddar. How does he do it, though? “It’s pretty simple in that I start with what’s in season and available, and then brainstorm with the sous chef,” Sousa says. “Lots of our dishes are born out of classic flavor combinations. In this case, I thought tart pomegranate would be a match made in heaven with fatty coconut and sharp-white cheddar, which is rich but has a bite to it.”

Sousa does some culinary research, but above all, he relies on his own palate. “I never say, ‘Maybe someone will like this.’ It has to be something I like.”

Hmm, does this mean that diners who are miffed over the lack of bread baskets or hot tea at Salt of the Earth will now have another axe to grind with Sousa if they taste an ingredient pairing they don’t like? He wouldn’t be surprised—or especially bothered, it seems.

A recent New York Times article focused on chefs who dictate rather than accommodate. Sousa sees himself as “part of that philosophy.”

“I see it as my role in helping to build a burgeoning food scene where people have options that are very specific. Nobody wants every restaurant in town to do the same thing with the same seasonal ingredients.” Amen to that.