The only people in town who don’t seem to be star-struck by the Penguins’ Kris Letang? His teammates. 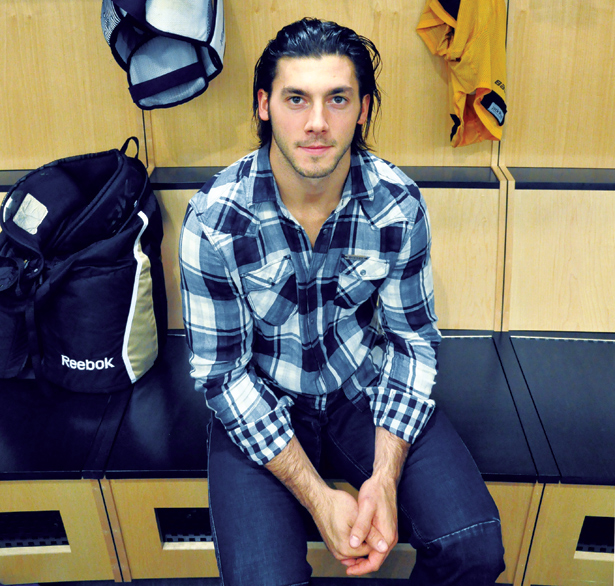 It’s not easy being a man of style in the NHL, a league defined by the hockey-hair mullet, scraggly playoff beard, toothless smile and perpetual shiner.

It’s especially rough for the Penguins’ emerging star Kris Letang because the Penguins are a band of brothers—and, of course, no one busts each other’s chops quite like brothers do.

During the photo shoot for this article, word got out that “Tanger” was in the Penguins’ locker room cleaned up and ready for his close-up. Within minutes, tough-guy defenseman Brooks Orpik peeked his head in through the locker room doors, sporting one of those mischievous big-brother grins a la Wayne Arnold from “The Wonder Years.” Sidney Crosby was right behind him, peering over Orpik’s shoulder. Letang braced himself with a smirk.

“Oh man,” Crosby warned the photographer while pointing at Letang’s stylish denim loafers. “You better shoot him from the waist up.” Orpik and Crosby quickly closed the doors and retreated before any comebacks could be lobbed their way—their laughter echoing down the hallway.

Letang, who is just about the most down-to-earth 23-year-old millionaire you’ll ever meet, simply smiled and shook his head before saying, “Those guys …”

PM: How did you spend your summer vacation?
KL: I trained all summer with Max Talbot in Montreal, working on my overall strength. On the ice, I practiced taking more shots from everywhere in the zone, making sure I hit the net.

Are you going through Stanley Cup withdrawal?
I think all the guys who won it in ’09 miss it already. Whenever you see a team win the Cup after you, it’s like, Man, they took it from us. You feel like you got your trophy stolen. I went on vacation during the Stanley Cup Finals because I didn’t want to see any of that. Right away, it pissed me off.

What happened in that Montreal series anyway?
When we show up against a team like Washington, we’re excited because we know they have a great team. We’re not too confident, and obviously, we hate those guys so much that it brings our game to another level. I think maybe we didn’t have that hatred for Montreal. We thought we were in control.

Will those bad memories fuel you this season?
We want to get revenge against every team, pretty much. We aren’t happy with the way last year ended, and I know all of the guys are fired up to drop the puck, especially in the new arena.

What’s the best part of your job?
Playing against the top lines. Going to Washington and knowing that I’m going to be matched against one of the best players in the league [Alexander Ovechkin].

Do you ever get nervous before those big games?
Not really, but Mario [Lemieux] was still playing when I had my first practice with the Penguins, and I had to do a drill with him and I was so nervous! Growing up, Mario and Jaromir Jagr were my favorite players. Luckily, Mario came over and talked to me and gave me a lot of tips. Even now that he’s retired, he still stops in our locker room all the time to make sure we’re never too nervous about a game.

You guys always seem like you’re having a blast on the ice.
We’re so young—we’re like kids in the dressing room. Even the older guys feel like they’re kids again, like they’re just playing to have fun. That’s why we’re a family, like brothers.

What’s the best prank you’ve witnessed on the road?
During Jordan Staal’s rookie year, someone took all the furniture from his hotel room and set it up perfectly in the hallway like it was his room. It was the funniest thing I’ve ever seen. You never know who is the mastermind behind the pranks. But I have my theories.

Favorite day-off routine: Shopping at 412 in the South Side. Nordstrom. Saks.

Favorite eatery in the ’Burgh: Nine on Nine or Dish Osteria.

Most annoying roommate on the road: Myself? I don’t know (laughs).

Closest friends on the team: Sid and Flower [Marc-André Fleury].

Pregame routine: I take a shower and try to clear my head.

Most unusual gift from a fan: Someone baked me cookies and gave them to me in the parking lot before a game. They were good, too.

Most misunderstood goon with a good heart: Daniel Carcillo from the Flyers is actually a nice guy.

The Penguins will lift the Cup this season because … All four lines can score goals.

Message for Pens fans: Oh, I don’t need to ask them anything because they always deliver.

This article appears in the November 2010 issue of Pittsburgh Magazine.
Categories: From the Magazine, Penguins