Three years after the feature that helped Pittsburghers get very well lubricated, After Dark asks — are these still the best bars in town? 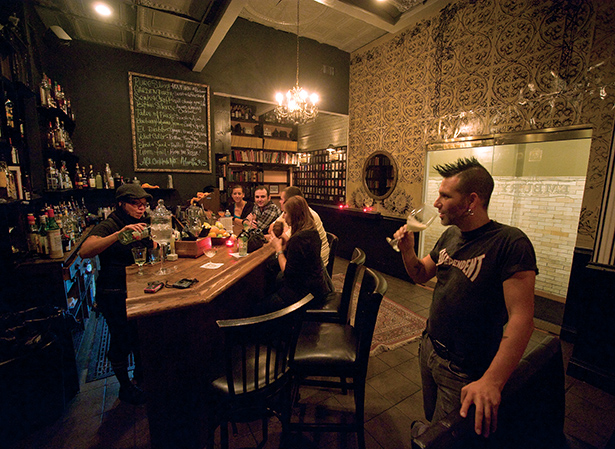 R.I.P. Embury. We miss you. Photo by Jim Judkis

About three years ago, I started working on our November 2010 cover story, 20 Hot Bars. I sipped, I snacked, I judged. Three years later, I’m always pleased to see that people are still clicking on the story for nightlife guidance. But, as the world of drinkin’ changes rapidly — even in Pittsburgh — I thought it was about time for an update.

I won’t change the original list (despite one commenter’s insistence that I nix the whole thing in favor of a list of local VFWs and Moose clubs), but I’ll let you know how I feel about each choice a few years later. Call it 20 Hot Bars: The Reckoning.

AVA Lounge — at last check, looks to endure despite the impending closure of its eternal partner-in-crime, the Shadow Lounge. Last I heard was that Shadow would be relocating but AVA would remain; I could fill a strongly worded post bemoaning the departure of one-half of an East Liberty landmark, but I’m glad that AVA will, apparently, press on.

Bocktown — the opening of Bocktown the second in Monaca has brought world-class beer to that particular locality. But the ascension of Bocktown’s menu to irresistible status has elevated Bocktown from one of the top bars around to, well, one of the top anything around.

Bravo Franco — as development continues in the Cultural District, Bravo Franco’s fight gets tougher; once the go-to post-show drink spot, it now faces stiff competition from the likes of Meat and Potatoes and Six Penn. While those places are worth your while, don’t pass by the stalwart. Bravo Franco is still my favorite downtown bar for a traditional cocktail and a spirited conversation.

Casbah — I included Casbah as my go-to wine bar, while admitting I’m, uh, not a wine dude. Today, I’d call it a tie between nearby spots, as Casbah and Toast distinguish themselves for different reasons. Still, the slick Shadyside spot is nothing to pass up.

D’s Six-Pax and Dogz — still the bottle flagship. While expansion on some draft-first properties around the county has continued, D’s has the beer cave. And that’s all you need.

Duke’s Station — I don’t know. Definitely a cool place, but under further scrutiny, I’m beginning to think it’s not quite worth the trip for those on this side of the tunnel. Definitely a must-go for neighbors; for those removed from the Castle Shannon metro area, I might point you to Bigham Tavern instead.

Embury — gone, missed, bemoaned! We have Acacia to drown our sorrows, but nothing can truly replace Embury in our hearts.

Grandview Saloon — still awesome; at the time, though, I hadn’t noticed their cocktail/martini of the day feature. Whatever it is, order it. Even if it’s the kind of thing you never order. I had a Thin Mint Martini. Think I order those that often? It was awesome.

Jack’s Bar — that guy who wanted me to talk only about old-man watering holes? He said this was the only legit bar on the list. Remains a great bar, particularly as the anti-hip antidote to the rest of Carson Street. Still, the South Side scene has suffered in the intervening years; come here for happy hour and a cheap dinner, if not necessarily to party.

Jernigan’s Tobacco Village Scotch & Cigar Bar — don’t forget about this tasteful spot in Mt. Lebanon. Those who search for a whiskey and a fine cigar have been given more options in the past few years; Jernigan’s is still the best of them (with apologies to an intriguing but ultimately disappointing North Shore joint that shall remain nameless.)

Kelly’s Bar and Lounge — can do no wrong.

Monterey Pub — in another territory where rivals have emerged. Killer Irish fare keeps it tops in the neighborhood.

Moondog’s — if you have one football-sized pierogie a year, this is where you should get it. Moondog’s isn’t a legend for nothin’.

Point Brugge Cafe — it can only compete with itself; sister establishment Park Bruges might be even better. Lots of people think of the Brugge/Bruges twins as brunch or dinner spots; those people are neglecting an awesome bar.

Redfin Blues — I’m always convinced that Washington’s Landing (and Redfin Blues along with it) will stop being Pittsburgh’s best-kept secret and will suddenly become overrun with riffraff. It never happens. The island is still the most peaceful place within a stone’s throw of downtown, and Redfin Blues — which opens for the season next week, by the way — is still the closest Pittsburgh gets to Key West.

Sharp Edge — I didn’t think that there was any way that Sharp Edge, the network of killer Belgian-style havens, could get any better; I didn’t figure that they’d expand straight into the heart of downtown. Now I can get Bites and Frites for lunch. The Beer Emporium in Friendship is still the best of the Edges, but Bistro Penn is the best thing to happen to downtown beer drinking since the invention of tailgating.

Want to try something totally new? Check out our chat with the owners of the Strip District's Bar Marco below.

Watch: Go Behind the Scenes at Bar Marco