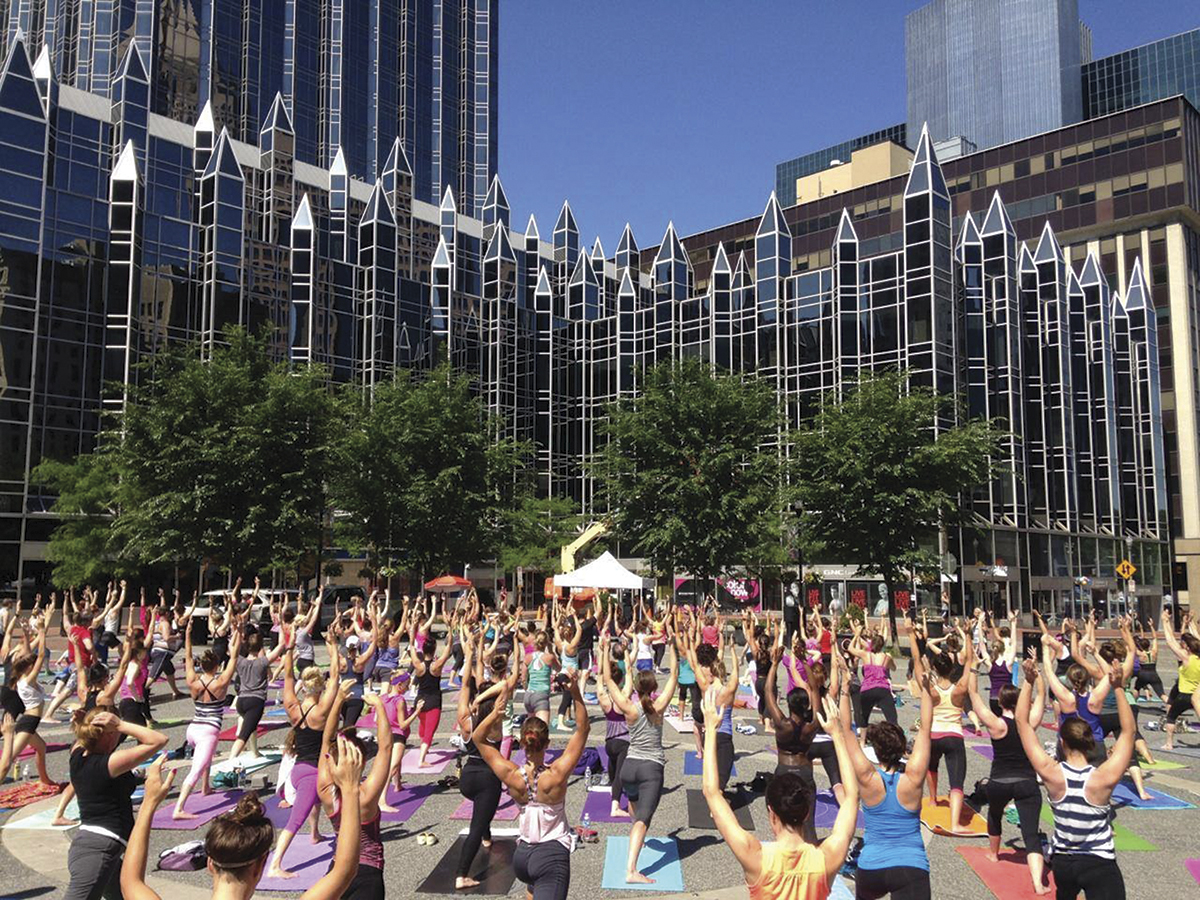 In this month of soft, early sunrises and late, lazy sunsets, it makes sense that we’d rather find our workouts outdoors. It’s time to have our sweat dry in the breeze, see our city by two wheels or on our own two feet and get a little dirty while doing it.

Let’s start downtown with Yoga in the Square, a free class from 10-11 a.m. every Sunday in Market Square. Sponsored by the Pittsburgh Downtown Partnership, Lululemon and Fittsburgh, the event started last year as an effort to encourage people to explore downtown. Leigh White, PDP vice president of marketing and communications, says she was surprised by how quickly Pittsburghers embraced the yoga offering.

The yoga class runs through Sept. 27 and features different local instructors each week. Due to the heavy turnout, instructors wear a wireless microphone, and assistants walk around and help with positions.

Get there early — say, 9:30 a.m. — to secure a spot for you and your mat. Yoga in the Square also provides mats for newbie yogis and out-of-town visitors.

“It’s a great experience and a really nice way to experience downtown in a very different way,” says White.

Don’t worry about getting the winter blues when the summer series ends. The PDP says it hopes to revive the yoga series at The Wintergarden at PPG Place on Sundays through the winter.

Organizers plan to offer classes such as Zumba and yoga as part of the celebration. OpenStreetsPGH is part of a movement called Ciclovia, which has prompted hundreds of cities across the globe to temporarily close streets to motor vehicles.

What to eat this month: garbanzo beans

One quick snack could have the potential to lower your cholesterol level and keep you full with its high protein and fiber levels, says registered dietitian nutritionist Jenny Nguyen. That snack is the simple chickpea, also known as the garbanzo bean. She says she also likes it because of its low glycemic index, meaning that it won’t spike your blood-sugar levels. Nguyen likes to make a roasted snack out of her garbanzo beans. Rinse, dry and spread one canful of chickpeas over a baking sheet. Toss with 2 teaspoons of canola or olive oil and roast them at 400 degrees between 35-42 minutes, she says. Stir the beans every so often so one side doesn’t burn, and taste them to ensure they’re done — you’ll want them to be crunchy all the way through. Once they’re baked to perfection, add your choice of seasonings, such as salt, creole seasoning or cayenne pepper.

This article appears in the July 2015 issue of Pittsburgh Magazine.
Categories: Top Doctors