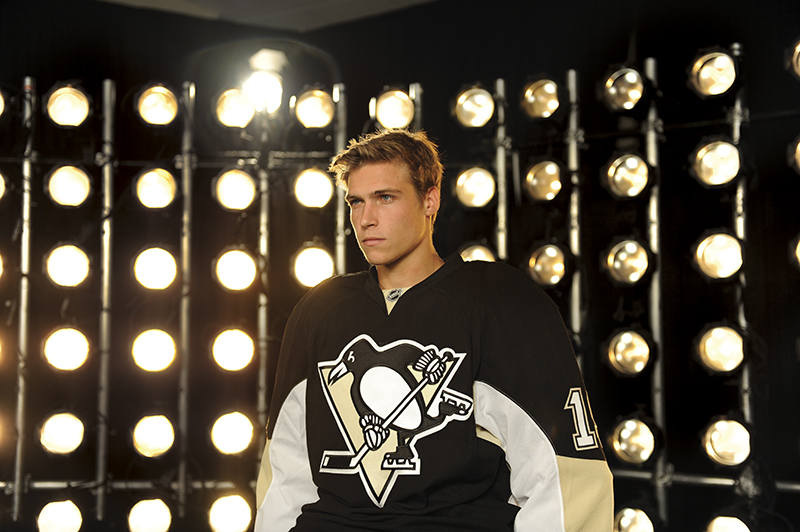 Before this interview with 21-year-old Pittsburgh Penguins winger Beau Bennett kicks off, James Neal has some things he would like to say about his new linemate and locker-room neighbor. A glint of big-brother trollishness flickers in his eyes. He’s clearly delighted that we’re here to talk to Bennett.

All right, James. Describe Beau Bennett to someone who doesn’t care about hockey, like my grandmother.
Neal: We call him Drizzy because he listens to a lot of [hip-hop artist] Drake. His musical taste is … I dunno. He put his iPod on before the game the other day, and we had to skip a few songs. He’s pretty chill. He’s the California Kid. Got some sick hands.

Rumor has it that he put on some muscle during the offseason. Is that true?
Neal: Oh yeah, sure. He’s walking around the locker room with his shirt off a little more now.

Thanks, James. Hey, Beau, how did you put on so much muscle this summer?
Bennett: I trained at Athletes’ Performance in Carson, Calif. It’s not just hockey players [who] roll through that place. The whole LA Galaxy soccer team trains there. [Chicago Bulls star point guard] Derrick Rose rehabs there. It’s a lot of cross-training, not just weights.

What workout did you dread the most?
On Fridays, we knew we had the weekend off, so we were in trouble. We had to do this thing called the VersaClimber machine. You’re upright, and you’re holding on to handles and your feet are on pedals. And you have to “climb” 1,000 feet in three minutes.

That’s a lot of feet.
I’ve never puked working out before. This summer was the first time for that experience.

Your buddy James told me he gets frozen meals shipped to him because he can’t cook. What’s your nutrition like?
I’m naturally skinny, so I don’t go overboard with watching what I eat. But when August hits, I switch to drinking only water. No bread. No pasta. Just protein and fruit.

So that means none of California’s famous In-N-Out burgers?
Oh, I would crush In-N-Out. Frequently. Because I have a lot of friends who aren’t in hockey. You can’t not go if they’re going. It’s delicious. People outside of California don’t understand. It’s not just a fast-food burger. It’s a quality meal.

From Los Angeles to the Pittsburgh Penguins. How did this happen?
My dad and mom never followed hockey. But when Gretzky came to LA, people started throwing their kids into roller hockey. My older brother started when he was 5, so I’d throw the skates on. Nothing too serious. But then after a few years, I fell in love with it. I didn’t switch over to ice until I was 15.

You’re a real-life Charlie Conway. That’s a Mighty Ducks reference. You may not have been born yet. What I’m saying is, no frozen ponds for you.
Yeah, my parents had a little Sport Court in the backyard, so that was kind of like my pond. I’d be out there every day before [and] after school. It’s funny — even this summer when I went home and lived with my parents, I’d be out there every day shooting around.

Yeah, but it had to be tough to find enough kids for a full street-hockey game in Los Angeles.
Oh, for sure. I was the weird hockey guy at my school.

What’s the strangest thing that’s happened to you since becoming a Penguins player?
I get quite a few marriage proposals on Twitter. Some people in the stands have made signs asking me to go to prom.

James loves to bust your chops. He has a similar relationship with Geno. Is this a thing with your line?
You want that camaraderie with your line. You want that trust — where they can tell you when you messed up. You don’t want to beat around the bush. You don’t want to think you’re playing well when you’re not. Geno and Nealer have that. It’s something I want to learn from them.

The Flyers: your thoughts?
I’ve never been in a rivalry like that, where it’s just … We just hate them. It’s weird. I didn’t grow up hating the Flyers, but once I was drafted here and knew the culture, I just … I can’t stand them. I mean, it’s fun. I just come out of the games a little more bruised than usual.

You were up and down from Pittsburgh to Wilkes-Barre last season. How was life, literally, on the road?
I got pretty lucky. When I first got called up, I drove to Pittsburgh with Billy Guerin. He was on his way here anyway. I mean, it’s not exactly a fun drive, especially when you’re by yourself, so it was good to ride with Billy. He’s a beauty. With most people, five hours would seem like a lot of talking, but Billy loves to tell stories. That’s a fun car ride.

Matt Cooke, the team’s undisputed chirper, has departed. Who’s taking up his mantle?
James Neal and Pascal Dupuis are pretty solid. We’ll miss Cooke, but I’m sure Neal will make up for it. [Laughs]

Did you feel the wrath of the rookie pranks?
One time, everything in our hotel room was pushed up against the wall. Like, everything. It was pretty impressive, actually. They must’ve had a whole team of guys in there. One other time, I got all the pockets in my suit sewed shut. I went to reach for my phone after the game and … yeah.

What happened?
I had to rip the whole suit apart. Thankfully I’m not a rookie anymore. [Pause] Well … actually, I’m sure I’ll still get pranked.

In the distance, James Neal can be heard shouting from the other room. “Drizzy … Drizzy!”

This article appears in the November 2013 issue of Pittsburgh Magazine.
Categories: From the Magazine, Hot Reads, Penguins