How to spend your St. Patrick’s Day drinking as authentically as possible. 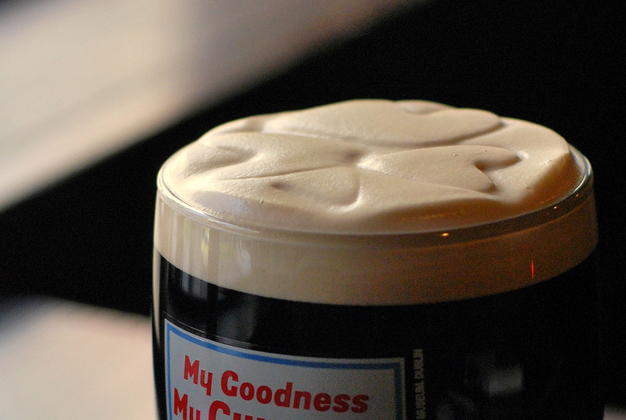 Somewhere in the latter half of my undergraduate career, I spent a semester in Galway, on Ireland’s West Coast. I assume that I actually took classes during this sojourn, though it’s tough to recall any particular knowledge gained amidst a fog of dark beer and rainy days.

I did, however, learn a thing or two about drinking like a real Irishman. First, to the hurtful and dangerous stereotype that the Irish imbibe more than anyone else on the planet …well, actually, that’s pretty much true. Having a few pints (and a few shots, and what have you) is more or less an everyday occurrence on the Emerald Isle; you get up in the morning, go about your business, and then go to the pub. And there are pubs everywhere — in the supermarket, in your apartment complex, on campus, everywhere. The Irish pull up a bar stool like we turn on the TV — at the end of your day, that’s just the next thing you do.

So if you’d like to spend your St. Patrick’s Day weekend drinking in the traditional way, follow these simple rules. It’ll give you a sense of cultural superiority over those wayward fools treating it like any other night of revelry. You didn’t drink a metric ton of Guinness just because — you did it to honor your heritage, right?

1. On the subject of green beer.
Never.

2. On the subject of stout.
The most reliable rule if you want to drink like an Irishman is to stick to stout — Guinness, preferably, and draft if you can manage. Bottles are fine, but there’s nary an Irish watering hole without a Guinness tap. Other Irish stouts are okay — Murphy’s, particularly — but American microbrews are unacceptable. They would be seen as unnecessary across the pond.

3. On the subject of Killian’s Irish Red and other American beers with “Irish” in the title.
See no. 1.

4. Failing stout, try cider.
Yes, cider. Many Americans on their first trip to a quaint little pub in the midlands will be surprised to find that, behind Guinness, the most popular brew around is Bulmers Cider (known abroad, including in the States, as Magners) from County Tipperary. If you can find it here, it’s worth your time — a crisp, cool and refreshing cider that’s only mildly sweet (so you can drink it all night.) You’ll have to explain to your unenlightened compatriots that it’s the real deal — but if they try it, they’ll be convinced.

5. Failing stout and cider, go for other brews from Guinness.
My father will go to just about any bar in town in search of Harp Lager on tap, one of the sister brews from Guinness. Imagine if a normal, full-bodied American — Coors or Bud — were, you know, awesome. There’s a third in the Guinness triumvirate, too — Smithwick’s Irish Ale, the real version of the aforementioned Killian’s. If you’re ordering that, though, a word of warning: The “w” is silent. Pronounce it SMI-thicks, or, if you’ve had a few, Smiddicks.

6. On the subject of hard liquor.
Whiskey, all the time, every day. If you must, you can have a gin and tonic or a vodka tonic. No martinis of any variety, if you can help it. Rum should be kept to a minimum, and only in themed environments (think tiki bars.) And the order of preference goes: Irish whiskey, American bourbon, Scotch, Canadian, all others. Yes, bourbon is a-ok — the Irish love them some Jack Daniels. I was in a rural Irish home when a kindly older woman said, “Would you like a sip of whiskey?” She then presented a full, very large bottle of Jack. And when someone offers whiskey, you are obliged to drink it.

7. The dilemma of “Irish Car Bombs.”
This ill-named concoction — usually a shot glass, half Bailey’s and half Jameson, dropped into a two-thirds full glass of Guinness and consumed post-haste — is an American invention that has been reluctantly accepted in Irish bars that cater to college kids and/or Americans. It would never, though, be referred to by that name in Ireland, painfully offensive as it is. Many bars here will offer them, and a stunt drink that makes one drunk quickly is perfectly normal in Ireland — but to be safe, avoid them unless you’re on a college campus.

8. On the subject of Irish coffee.
Coffee, whiskey, brown sugar, topped with cream. That’s it. No Bailey’s, no Kahlua, no creme de menthe.

9. Grasshoppers, Irish Creme, Bailey’s, et al.
Drinks featuring Irish Creme, creme de menthe and the like are often lumped into St. Patty’s celebrations because they’re green and/or minty. Okay if you like ‘em, but patently inauthentic. These are not particularly popular in Ireland.

10. On drinking games.
I’ll relay from memory, as best I can, an explanation of the bafflement of an Irish man I knew at the concept of a drinking game. “We sat down and they explained the game to us, and we were sipping our beers. And they told us not to, because you’re supposed to drink when you have to, or something, in the game. And all we could say was, ‘Why can’t we just drink?’”

11. A note on holding one’s liquor and getting home.
Passing out from drink is a proud Irish tradition, to be savored; it is to be done, however, in one’s bed. When you feel yourself en route to unconsciousness, go home, regardless of the time. No Irishman would get black-out drunk and keep drinking, and no American — of Irish descent or otherwise — should either. If you’re done at 4 p.m., go home. It’s fine. And you shouldn’t even know where your car keys are this weekend. Toss them under the bed and get a driver. I recommend an Italian-American friend.