10 Reasons to Return to Pirates Baseball This Season

Why you should return to PNC Park this season ... and only one reason includes food or fireworks. 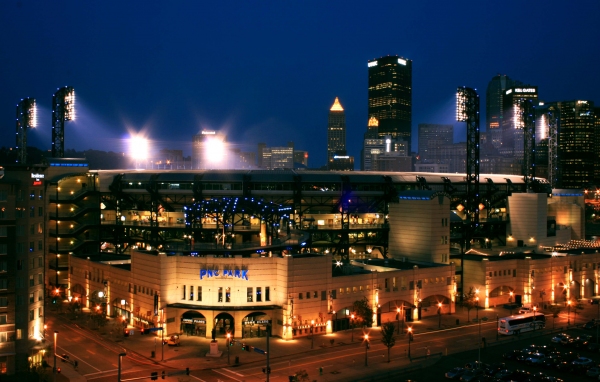 The Pittsburgh skyline backdrops an evening game at PNC Park during the 2010 season.

Last Thursday was the 10-year anniversary of PNC Park’s opening. This landmark was marked by…well, not much, actually.

Perhaps out of ignorance, perhaps out of a desire to forget the last ten years of Pirates baseball, no banners were unfurled for the world’s most beautiful baseball stadium on its big 1-0.

Still, this is definitely the year to return to PNC Park. I know that nearly 20 years of bad trades, temper tantrums, wilting sluggers and hopeless management has soured a great deal of the population on the original black and gold, but I’ve got a good feeling this year—and I can back it up.

Last week, I had the chance to chat with longtime Pirates play-by-play announcer Greg Brown about the best reasons to embrace our Buccos again in 2011. They’re not going to the World Series, but the formula is right for baseball to get a good deal more interesting on the North Shore this summer. Here are 10 reasons to love the Pirates again (and only one of them involves food, pierogie races and concerts.)

1. ANDREW MCCUTCHEN. The brightest star the Pirates have seen since the early 90’s is just starting to shine. This will only be his second full year in the majors, but he’s already regarded as one of the game’s elite outfielders—and if reports from Spring Training are any indication, he’s only getting better. “He’s one of the rare players in baseball that can do absolutely everything on the field,” Brown says. McCutchen has quickly gone from being an eye-popping rookie to one of the few players in baseball who’s worth the price of admission all on his own. Speaking of which …

2. THE MOST FAN-FRIENDLY PRICES IN SPORTS. The Pirates still boast the lowest ticket prices in baseball (according to most measurements), and cheap seats go for 9 bucks. Compare that to a nosebleed seat at Consol Energy Center (always sold out, usually $80 and up on StubHub) or Heinz Field (if you have to ask, you can’t afford ’em.) Or, for that matter, to another MLB team—a great seat on the first base line at PNC Park will set you back $35. At Yankee Stadium, it’d be 10 times that. Hell, even in Phoenix, it’d be $110.

3. THE BEST YOUNG CORE OF PLAYERS SINCE BONILLA, BONDS AND VAN SLYKE. I’ll leave this one to Brown, who says: “McCutchen, Alvarez, Tabata, Walker. There is a legitimate handful of young players that could develop into all-stars playing together, for the first time, on this Pirates team. They have a higher upside than anybody I’ve seen.”

4. THE FURIOUS STRUGGLE OF THE MARGINAL PITCHER. Let’s not mince words: The Pirates rotation does not exactly inspire confidence. What that means, though, is five men who are desperate to prove themselves will play for their lives. Paul Maholm needs to justify his former reputation as a top prospect. Ross Ohlendorf needs to prove he’s worth the raise he received this off-season. Charlie Morton knows that even a brief slump could end his major league career. They’ll all come out to deal. And, Brown says, “If they all pitch like I think they can, it’s a rotation that should be solid enough to be somewhere in the middle of the pack in the National League.” Baby steps, folks.

6. THEY’RE PROBABLY GOING TO WIN (NO, REALLY.) Not in any grand sense, of course, and this probably won’t be the year to beat the losing streak. But last year, despite one of the worst records in team history, they were 40-41 at PNC Park. In 2009—exactly the same, 40-41. If they even improve a touch—a game or two, which is more or less inevitable—you’ll have a better chance to see your team win than lose. “They’re 50-50 in the past, and I’m saying they’re gonna be better,” Brown added. (He knows his stuff, too.)

7. A NEW MANAGER WHO’S PREACHING AGGRESSION. You don’t want too much aggression in professional sports (see Cooke, Matt), but just about anyone would agree that the sleepy approach to the game instilled by former skipper John Russell needed a bit more spunk. Enter new manager Clint Hurdle, who is trying to instill some fire in the young Buccos. “[Hurdle] has told them since day one, if you have to err, err on the side of being aggressive, not cautious,” Brown said.

8. THIS IS PITTSBURGH. Angry Pittsburghers of a certain age will tell you that this is a football town. Older Pittsburghers—and those with any sense of history—will correct this statement. Pittsburgh is a football town, a baseball town and a hockey town in equal measure—but we’ve been a baseball town for a good, long time. Remember, Pittsburghers were heading to the North Shore for Pirate games more than a decade before Art Rooney was even born. When you go to see the Pirates, you’re engaging in the most genuinely Pittsburgh activity imaginable.

9. THE OPPORTUNITY TO CHEER FOR TWO  HOMETOWN HEROES. Neil Walker’s retired jersey still hangs at Pine Richland High School. The Bucs young second basemen grew up idolizing Bill Mazeroski and cheering for the Pirates; when he finally made it to the majors, it was in a Pirate uniform, and it was Mazeroski who taught him the ropes at second base. This is truly a feel-good story, and Walker has the potential to be one of the hottest middle infielders in baseball. And he’ll be joined this season by another western Pennsylvania native—Joe Beimel, originally from St. Mary’s, Pa.

10. BELIEVE IN MIRACLES. “Blass called it the greatest moment in the history of the ballpark,” Brown says. “They had just given up the lead in the top of the ninth, here we go, same old Pirates. And now Pedro Alvarez gets up there—this is the guy that we believe will carry the team, maybe the next Willie Stargell. And he comes out here, knocks it out of the park and wins the game.” Even in the midst of a forgotten season, a night at the ballpark can always amaze you.

This article appears in the April 2011 issue of Pittsburgh Magazine.
Categories: Pirates