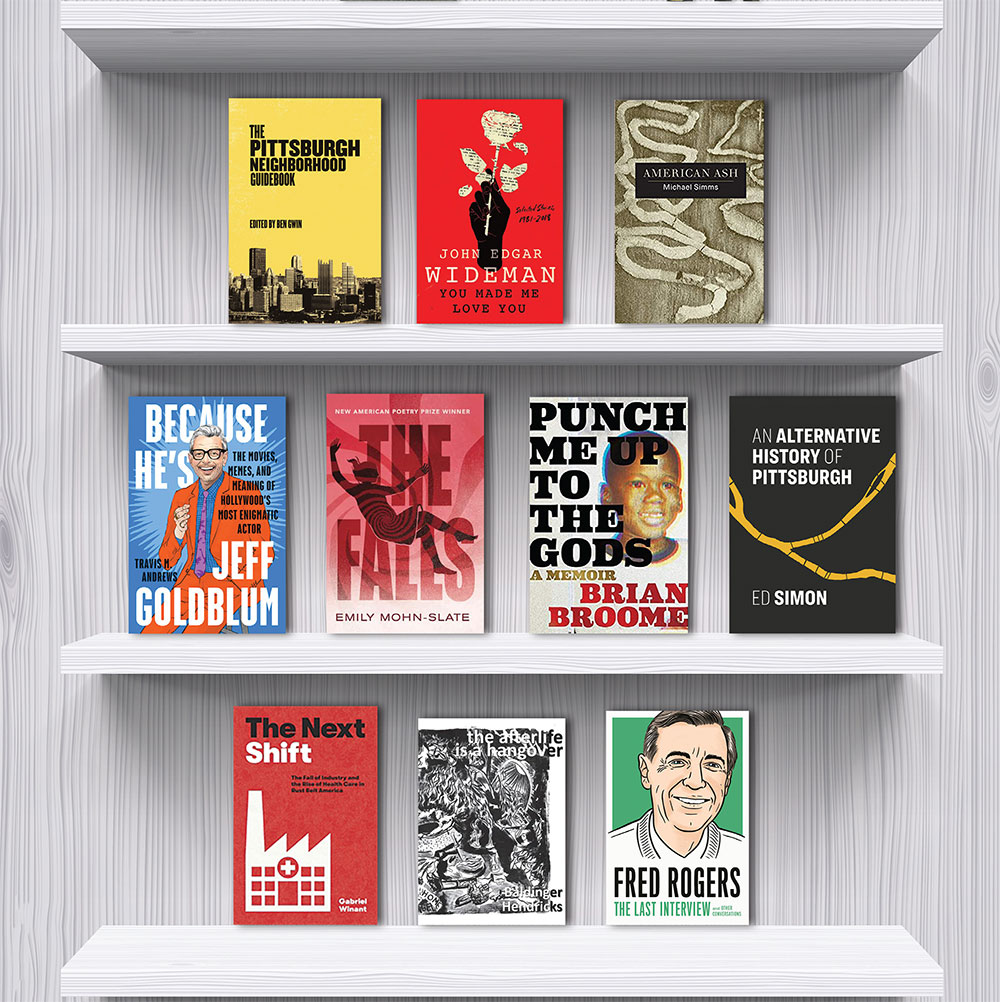 Unlike the average travel aid, which focuses on the best restaurants and attractions, this guidebook takes a deep dive into what truly separates Pittsburgh from other cities — our quirky patchwork of neighborhoods. As editor Ben Gwin relates in his introduction, “… there is a disconnect between the stories of the normal people who live in Pittsburgh and the sponsored content extolling the city’s revival.” The poems and essays included here, written by some of the region’s finest writers (including Sherrie Flick, Cedric Rudolph, Jim Daniels, Cameron Barnett, and PM contributor Lori Jakiela), seek to redress that situation and give voice to the more “difficult and complex” reality. From Big Dirty’s old truck to the Bride of Penn Avenue, from restaurant workers boozing Downtown to Bingo Night in Trafford, these personal stories show us who we are — warts and all.

There are very few authors who have written as eloquently about Pittsburgh and its neighborhoods as John Edgar Wideman. Perhaps that is because (according to his family’s lore) his great-great-great-grandmother, a slave who had children with her master’s son, came north and founded the neighborhood of Homewood. Wideman’s short stories are infused with a potent mix of myth and memory, the two circling each other and interweaving constantly. The 57 stories contained in these pages offer testament to Wideman’s innate lyricism and attention to detail on a granular level. Wideman is a two-time winner of the PEN/Faulkner Award for Fiction and a finalist for the National Book Award and the National Book Critics Circle Award. As he writes in the opening lines of “To Robby”, “Stories are letters. Letters sent to anybody or everybody.” These stories share the intimacy of letters. They read like dispatches from a life that has known much pain and tragedy but also love. If you’ve never read Wideman, this is the perfect place to start.

The poet Michael Simms writes, “Something there is / In the American heart / That wants to destroy / Everything beautiful”. A look at the news headlines on any given day of the week makes these lines hard to dispute. Fortunately for the reader, and the country at large, the poems in this generous collection bear witness to more than the pernicious aspects of the national character. Simms, who founded the esteemed Autumn House Press in 1998, has lately shifted his attention to Vox Populi, a website he created as a conversation between politics and art. In the lovely “Oh Darlin’,” a poem that gently insists we can be greater than our worst impulses, Simms affirms, “The intimacy / Of strangers is luminous, the way / We wish well for the man who lost // His car keys, the woman coming in / Out of the rain, the girl who missed / Her bus, the boy who stutters.” These poems are rich with allusions to art and music, comic books and casual conversations. “I felt a surge of gratitude to be among such / decent people in this lovely city in a dark time when the light of / kindness seems so rare,” writes the poet — and therein lies the magic of the book. By confronting the darkness, Simms enacts a restoration of the light.

Because He’s Jeff Goldblum: The Movies, Memes, and Meaning of Hollywood’s Most Enigmatic Actor
by Travis M. Andrews
Plume, $27

Jeff Goldblum, star of such movies as “Independence Day” and “Jurassic Park” as well as those goofy Apartments.com commercials, was born and raised in West Homestead. On the surface, his upbringing hints at nothing out of the ordinary. As author Travis M. Andrews describes it, his father Harold “worked as a doctor to the area’s steel-mill workers, often making house calls, while Shirley [his mother] mostly tended the home, a brick Colonial with a baby-grand Steinway in the living room.” Andrews points out, however, that there was “more bubbling beneath the surface.” Goldblum describes his early years as “a whole Philip Roth novel …”. His father’s temper sometimes turned violent. His mother “would vacuum the house naked”. This would be the incubator for the sometimes kooky, always off-center performances with which Goldblum has made his career. Filled with many humorous asides, silly footnotes, and even a fake interview with his subject, Andrews’ biography is no less idiosyncratic.

The poems contained in this slim volume are uniformly unflinching in their honesty and almost brutal in their clarity of vision. Emily Mohn-Slate has no interest in propping up the cultural myths of motherhood. “I want to keep sleeping when his yell slices twilight — / not feed the baby, whose appetite is unfeeling, total,” she writes with complete candor in “So Easy.” She confesses, “The baby grunts, spits — I want to be alone, / but it would be good for me to go out with the baby. / If I keep walking, he keeps sleeping.” She sums it up succinctly in “Feed,” where she confides, “I never meant to be so needed.” Sometimes happiness requires more strength than the poet can muster, as in “I’m Trying to Write a Joyful Poem,” in which (after an encouraging start) “… my poem becomes / about the collapse of long / love, how even the brightest / glint in the eye / becomes shadow eventually.” In these poems, though — just as in life — those heavy feelings eventually subside, leaving the poet to simply exist in moments of ordinary beauty, “My daughter stands, bare feet / balancing / on my thighs // We drum the steering wheel / make a clumsy music together”.

Punch Me Up to the Gods: A MEMOIR
by Brian Broome
Houghton Mifflin Harcourt, $26

Much as Emily Mohn-Slate does with her uncompromising interrogation of motherhood, Broome coolly dissects the cultural archetypes of Black masculinity. Watching a father reprimand his young son to stop crying in public, Broome reflects, “And I realize that this, what I am witnessing, is the playing out of one of the very conditions that have dogged my entire existence: this ‘being a man’ to the exclusion of all other things.” Broome reflects on his own attempts to embody what he understood from a young age to signify manhood, “disaffectedness, nonchalance, and hollow strength” by commenting, “It was a never-ending performance that I could not keep up to save my life. And when I failed consistently, there was never any shortage of people around to punish me for it.” Broome reveals himself to be bookish, un-athletic, gay, often hilarious, and staggeringly honest. A must-read debut.

An Alternative History of Pittsburgh
by Ed Simon
Belt Publishing, $16.95

Ed Simon packs a helluva lot of information in this small volume. Things get started more than 300 million years ago in the Paleozoic Era, as tectonic plates push into each other, sprouting a line of mountains that will eventually erode into the familiar easy roll of the Alleghenies and Appalachians. From there, Simon skips across the ages while picking up threads here and there — the establishing of Fort Duquesne and the Whiskey Rebellion, Stephen Foster’s birth and the assassination attempt on Henry Clay Frick — all the way up to the current gentrification of the city’s East End. Simon, a contributing editor for the History News Network whose work has appeared in The Atlantic, Newsweek, and The New York Times, adheres to a simple philosophy: “If there is any logic to history,” it’s “that every damn thing is connected to every other damn thing.” An engaging raconteur, Simon’s love of the city and its fascinating history shines through on every page.

The Next Shift: The Fall of Industry and the Rise of Health Care in Rust Belt America
by Gabriel Winant
Harvard University Press, $35

The inevitability of the transformation of Pittsburgh from an industrial mecca, the steel mills infamously earning our city worldwide renown as “hell with the lid off,” to becoming one of the largest health care centers in the country is at the heart of Gabriel Winant’s exhaustive examination of the shifting economies of the American Rust Belt. “In Pittsburgh,” Winant suggests, “both the booming market for care and the huge workforce to supply care grew out of the social and political context of the steel mill. The factories did not just make metal goods; they made people, institutions, a way of life, and a system of relationships — a social world. As the industrial basis of this world began to collapse, its inhabitants came under worsening social and economic pressure.” In effect, “Their world was melted down and recast, but it was still made from the same materials.” “The Next Shift” is a fascinating look at labor history and the continuing struggles of blue-collar workers, particularly in light of the pandemic and the increased burden, both personally and politically, placed on health care workers.

The Afterlife Is a Hangover
by Jason Baldinger and Nell Hendricks
Stubborn Mule Press, $13

Pittsburgher Karl Hendricks died at the age of 46 in 2017. He was a beloved musician, writer, and record shop proprietor. His absence continues to reverberate through the communities he was so much a part of in his lifetime. Much less an epitaph than a love letter, Baldinger’s cycle of 50 poems is a close friend’s emotional testimony of Hendricks’ diagnosis of oral cancer and everything that followed. Baldinger appeals to the reader, “what do you say / when someone tells you / they may be dying?,” only to answer his own question later, “our vocabulary for sympathy / leaves us cold in these moments / no comfort, mortal, lonely.” The poems are followed by a sequence of drawings from Hendricks’ daughter Nell that renders the emotional undertow of the poetry in a style reminiscent of handbills for punk shows. Broken glass, bent black nails, and wrecked rooms all serve to embody the feelings of loss and desolation.

“People long to be in touch with honesty and with another human being that they feel is real, rather than a show.” Honest and human: That was Fred Rogers through and through. Here, Rogers was talking with Rob Owen for the Pittsburgh Post-Gazette as he was about to begin filming the very last episodes of “Mister Rogers’ Neighborhood”; it’s one of several interviews from his long career included in this wonderful collection. In his introduction to the book, NPR’s David Bianculli writes, “Kindness, as much as anything, is the common thread in all these interviews and transcripts — the river that runs through them all.” Highlights are a conversation with Terry Gross from 1985 and the titular last interview, which was given to Diane Rehm in 2002. Of special note is the inclusion of the full transcript of Rogers’ testimony before the U.S. Senate Commerce Committee’s Subcommittee on Communications. Reading Rogers’ words throughout the book is akin to taking a deep, calming breath. Something, I’m sure, we could all use today.

This article appears in the Oct. 2021 issue of Pittsburgh Magazine.
Categories: Arts & Entertainment, From the Magazine, Hot Reads