The Number of Reasons to Celebrate Sidney Crosby

Career goal No. 500 was a significant milestone, but for the Penguins’ captain, it was also just another day at the office in a 17-years-and-counting run of defining moments that range from subtle to historic. 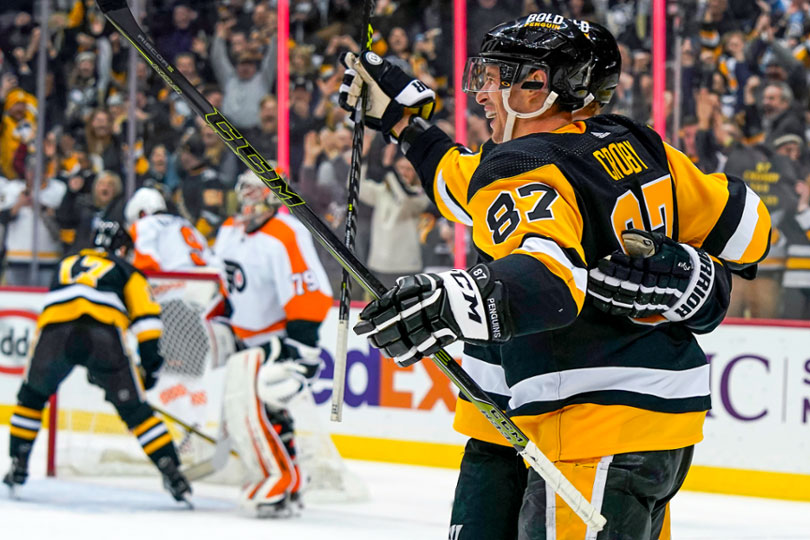 As it turned out, career goal No. 500 was as representative as any for Sidney Crosby because it was as imperfect as it was spectacular.

And that’s an appropriate signature for the Penguins’ captain.

A cross-ice feed from Evgeni Malkin. Crosby, positioned between the right face-off circle and the goal line, decides not to try a one-timer and instead cradles the puck for a split second before attempting yet another bad-angle shot.

This wasn’t even what hockey coaches would characterize as a Grade A scoring opportunity.

But the puck somehow still went off the outstretched stick of Flyers defenseman Ivan Provorov, off goaltender Carter Hart and, eventually, into the net (probably as only Crosby had envisioned it would in that split second before accepting Malkin’s pass and launching his shot).

What followed wasn’t bad, either. The balance of the power-play unit on the ice at the time embraced Crosby along the glass. The Penguins’ bench arrived eventually. Even goaltender Casey DeSmith joined the celebration from the other end of the ice.

The puck and Crosby’s stick were removed from the game (presumably they’re both on their way to the Hockey Hall of Fame). The fans chanted Crosby’s name and Crosby, in a gesture that’s a little out of character, acknowledged the adulation.

It all played out exactly as it should have on Tuesday night at PPG Paints Arena.

The asterisk attached is the reaching of what would be a career-defining milestone for most players wasn’t for Crosby.

For Crosby and the Penguins, there have been 17 seasons worth of defining moments.

Not all were perceived as historic.

But they’ve revealed Crosby’s impact all the same.

They’ve defined just as appropriately how he’s played the game.

Two such moments had occurred when the Penguins hosted the Senators on Feb. 10, less than a week before career goal No. 500.

In the third period of a one-goal game, Crosby covered ground as if another Cup was at stake and back-checked the Senators out of a scoring chance.

And then, with the Ottawa goaltender pulled and the game hanging in the balance, Crosby blocked a shot.

Crosby has long been willing to subject himself to such dirty work, and to apply a competitiveness, a relentlessness and a work ethic to his game that extends beyond the collecting of goals and assists.

His character is defined by how he does what he does as much as it is what is ultimately accomplished.

It even extends beyond the playing of games, and did again on the day after the much-anticipated 500th goal celebration, in Sullivan’s estimation.

“He comes to the rink today and puts his work helmet on, so to speak, and he goes about his business like he always does, trying to be the best player on the ice,” Sullivan maintained to media attending practice on Wednesday.

That, too, is worth celebrating.

As is the anticipation of even more of the same.