Spin says more than 100 warnings have been issued to riders per week in Pittsburgh for poor parking or riding, and the company will continue to penalize repeat offenders. 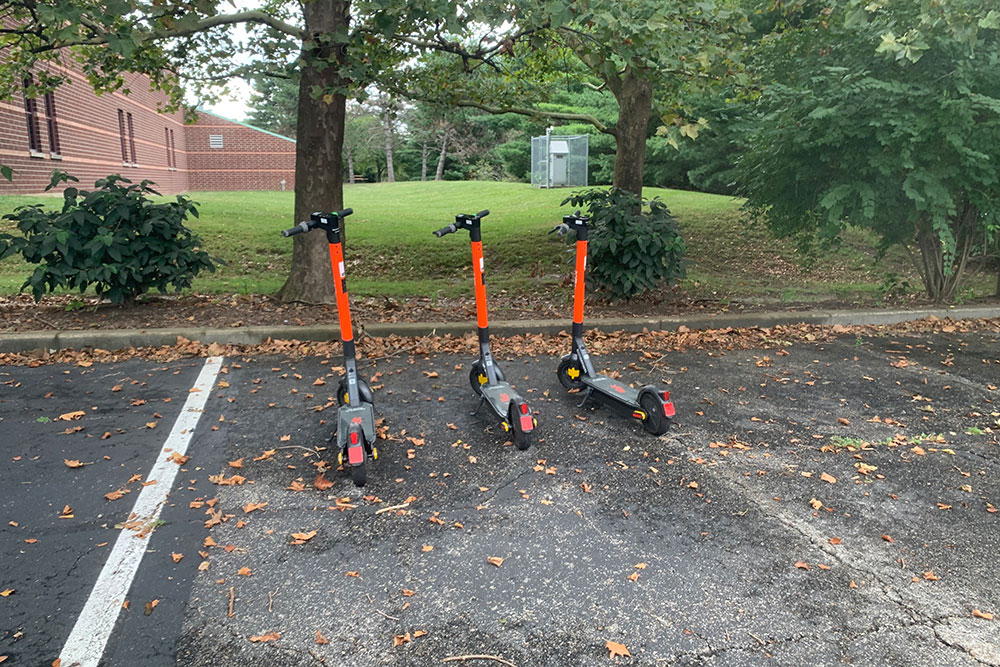 A fleet of little electric scooters has invaded the city this summer, and they’re impossible to miss. Bright orange and often left in the most inopportune of places, scooters from the Ford-owned company Spin have spurred a wave of debate from supporters and critics alike.

On one hand, they’re an accessible and eco-friendly alternative to cars in a city where parking is often a chore. They also provide a viable alternative to a crowded bus or an expensive Uber for residents who don’t drive, or simply don’t own a car. Riders with lower incomes can even apply for discounted rental rates — Spin Scooters usually cost a starting fee of $1 plus an additional 39 cents per minute — through the Spin Access program. In areas of accessibility and transit efficiency, there’s no doubt that Spin is unparalleled.

But on the other hand, the scooters have proven dangerous when misused — as they often have been — and Pittsburghers are complaining that they’re being left in troublesome places. Some have been discarded in the middle of the sidewalks, which makes it difficult for folks in wheelchairs or with strollers to get by, or in the middle of bike lanes, which could pose a threat to cyclists who may not see the scooter until it’s too late.

In an effort to remedy this, the company has outlined a set of penalties designed to curb scooter abuse. Strike one results in a warning issued to the rider; strike two brings a $10 fine; strike three includes a $25 fine and suspension until the rider completes a safety quiz; and after strike four, the rider is suspended indefinitely. 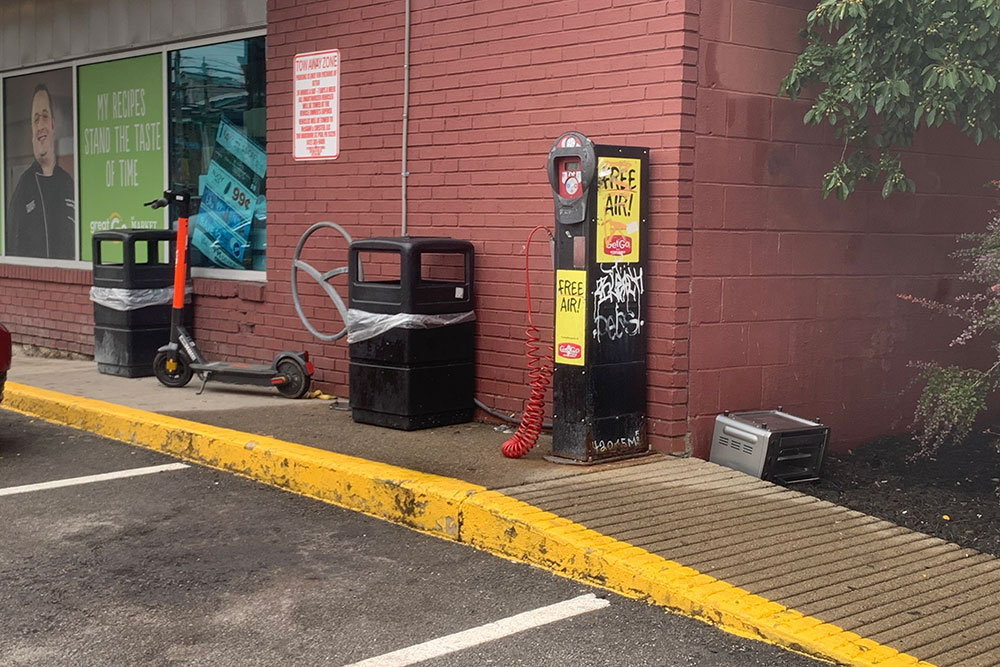 ABANDONED SCOOTER AT GETGO ON THE SOUTH SIDE

“Spin is actively working to combat scooter clutter by increasing rider education and suspending accounts that repeatedly violate safe riding and parking practices,” Shoman said. “We ask that all riders abide by our terms of service and the rules of the road to ensure the safety of everyone.”

The company also requires all users to upload a photo of the way their scooter is parked before ending the ride in the Spin app. The customer support team then reviews all photos to make sure the scooters are parked appropriately. If they’re not, the warnings and fines are dolled out. In short, the company knows when users are parked illegally, and the penalties aim to punish repeat offenders.

But rider education is a vital component, too. Before a first-time rider can take a scooter for a “spin,” they have to look over parking and ride safety information, too. Riding rules are also displayed on a loop in 16 “Spin Hub” locations around the city.

Anyone 18 years or older with a valid driver’s license can rent the scooters. Scooters are limited to 15 mph and aren’t supposed to be taken on roads with a posted speed greater than 25 mph, and they aren’t supposed to be taken on the sidewalks, either. Instead, they’re intended to follow the flow of traffic on roads or keep to the bike lanes to minimize the risk of a crash.

They should be parked — always out of the way of pedestrians and other vehicles — at a charging station, near the end of a block, by a bike rack or in a designated e-scooter parking area like the more than 100 “scooter corrals” at the end of streets and the 16 mobility hubs.

But how many of these rules are actually being followed? 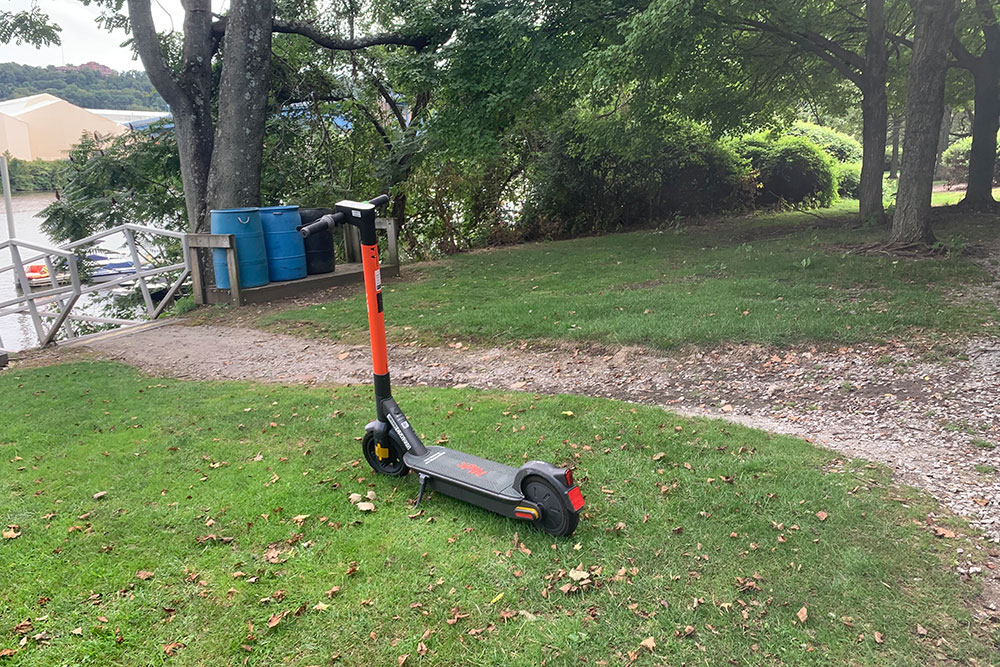 The city’s 311 Response Center account has been bombarded with complaints about the scooters being left in strange places or ridden where it isn’t safe to do so.

@Pgh311 illegally parked or abandoned scooters on Grandview near the Duquesne Incline. pic.twitter.com/b43q2C2vzj

One Twitter user tweeted pictures of the scooters parked illegally near the Duquesne Incline. Another said they had removed two of them from a handicap parking space in Shadyside, and another yet posted a photo of a scooter in the middle of the sidewalk in Schenley Park.

Another was parked illegally outside of Trinity Lutheran Church, and on Shiloh Street on Mount Washington, and on the Hot Metal Bridge …

You get the point.

WPXI-TV says it viewed one photo in which a scooter is seen blocking an accessible parking spot in Oakland. Others have even claimed to have seen the scooters on the side of the parkway. The illegal depositing of the little orange things have caused such an outcry that a Bad Spin PGH Twitter account has popped up.

Yet some have dismissed the outcry against scooters as “elitist garbage,” arguing that Pittsburgh is hurting for expanded alternative transit options that don’t require the expense, hassle and environmental consequence of cars. And, an Aug. 4 report from moveBuddha ranked Pittsburgh third on a list of potential so-called “15-minute cities,” meaning everything from education and work to health care, food and recreation can be found within a 15-minute walk or bike trip. According to the company’s website, one of Spin’s main goals is to “create a world full of 15-minute cities.”  In theory,  the scooters could achieve that goal with ease; they’re quick, easy to use and ample.

The problem isn’t the idea behind the scooters or even the execution of that idea. Rather, it’s the fact that they’re being used incorrectly; riders simply aren’t playing by the rules.

But nonetheless, the program is popular, and despite all its growing pains, it seems to do what it set out to do. With about 1,000 scooters currently on the streets of the Steel City, riders are taking full advantage of them as an equitable way of getting around without having to wait for a potentially crowded bus — a potential concern as COVID-19 cases continue to spike.

Although Spin doesn’t release its daily ridership figures, Shoman said the company will be working with Carnegie Mellon University and the Urban Institute to do a research study on the Pittsburgh pilot program in order to learn more about who, exactly, has been using the scooters the most.

But the company does know where the scooters are being used the most.

According to Shoman, most rides occur in Downtown, North Side, Garfield, Bloomfield and East Liberty. The company provided “heat maps” to better visualize exactly where the scooters are being used.

The first map shows use of scooters in  Manchester, Allegheny West and Central Northside, which according to U.S. Census data, has a median household income of $46,000 and poverty rate of 18%. 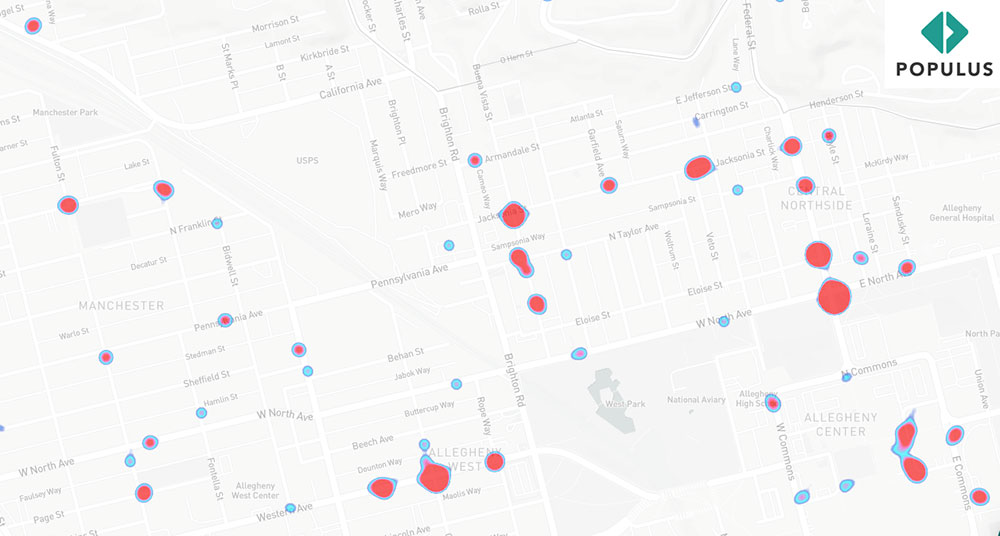 Similarly, the second map shows scooter use in East Liberty, Friendship and Garfield, which have a poverty rate of nearly 19% and a median household income of about $45,000. 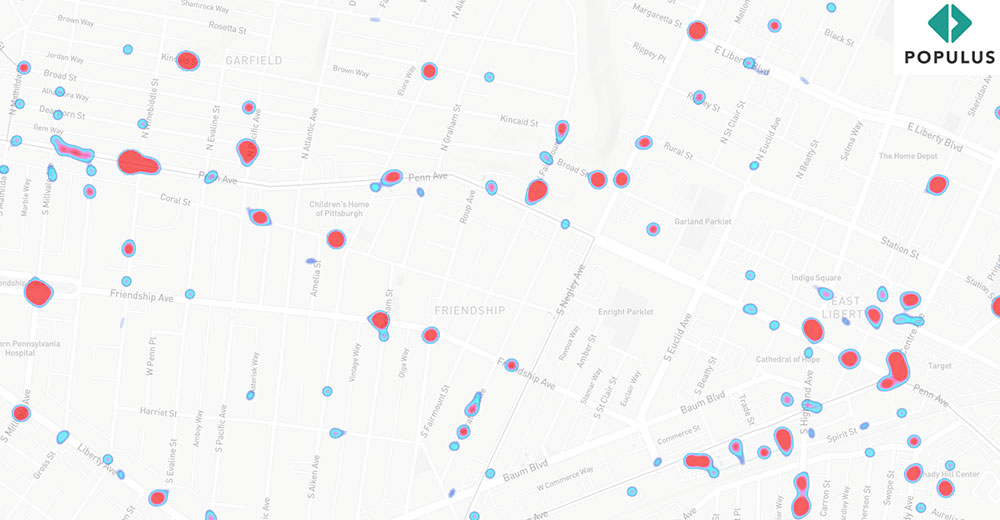 The scooter program is supported by the Pittsburgh Mobility Collective, which aims to bolster the city’s transportation system with more opportunities for carpools, carshares and a range of communal electric scooters and bicycles.

Information on all the many modes of alternative transportation supported by the Collective can be accessed through an app called Transit, which offers users the opportunity to “plan and buy trips on public transit and bikeshare, as well as rides on shared electric scooters from Spin, by-the-hour vehicle rentals from Zipcar, e-mopeds from Scoobi and carpooling via Waze,” according to Shoman. And as of Aug. 17, Google Maps announced a global integration initiative that would make the Spin Scooters display in real time, including battery life, on its interface, too.

Love them or hate them, the scooters seem to be here to stay. There’s still hope that with some education and a healthy dose of tough love in the form of fines and penalties, riding behavior might improve and the scooters will become as well-integrated into the city as the Healthy Ride bicycles and Scoobi mopeds.

In the meantime, you can report evidence of poor parking or riding by reaching out Spin at support@spin.pm or 1-888-249-9698, including in your message a photo or video with the vehicle ID visible and the time and place of observation.