The return of Kris Letang and Evgeni Malkin ensures more of the same for a franchise that no longer has what it takes in the playoffs. 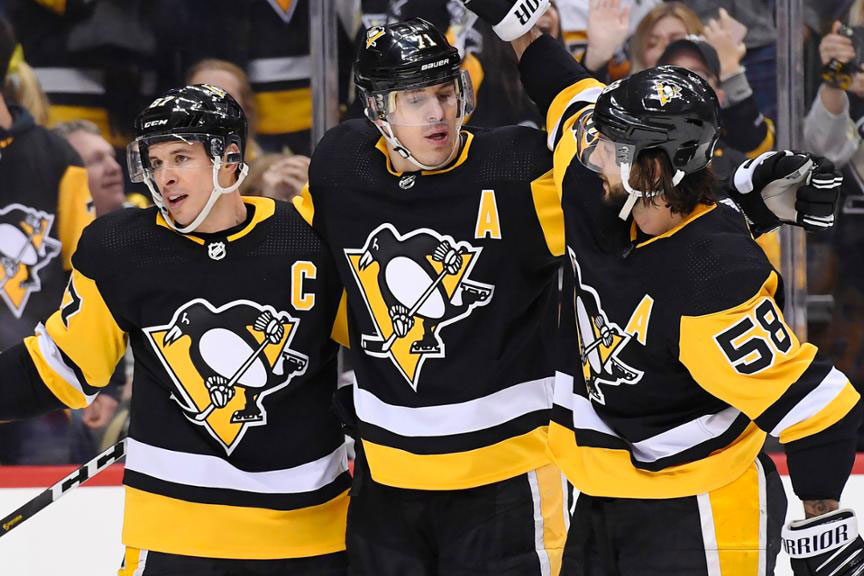 The Penguins kept the band together after all.

Not that those will be cheap imitations of Kris Letang and Evgeni Malkin when the tour few if any saw coming commences on Oct. 13 at PPG Paints Arena against Arizona.

But much like Mick Jagger, Billy Joel and even Bruce Springsteen, Letang and Malkin can no longer hit the high notes.

The Penguins were eliminated from the playoffs in the first round for the fourth consecutive season back in the spring (they at least got a little creative this time and blew a three-games-to-one series lead).

It was the franchise-record fifth consecutive series that ended with the Pens on the wrong side of a handshake.

Their response has been to blame what transpired during their seven-game collapse against the Rangers on “circumstances” (GM Ron Hextall) and to do everything in their power to run it back.

The justification is Letang is deemed irreplaceable because of his puck-handling and skating and because of the minutes he eats.

Letang was also on the ice for 17 of the 24 playoff goals the Rangers scored against the Pens.

As for Malkin, the three goals he scored in seven games against the Rangers (closer to eight games if you count overtimes) were his first, second and third even-strength goals in the playoffs in his last five series (the aforementioned franchise record-setting five consecutive series losses).

Malkin had 42 points in 41 regular-season games but he was also a team-worst -10 last season.

That’s not to suggest they’ve been losing because of Malkin, but nor has he been helping them win.

Malkin apologists will argue there was nothing better available as a potential No. 2 center in free agency.

But the Rangers signed Pittsburgh native Vincent Trocheck, who is younger (29) and more well-rounded than Malkin (Trocheck wins face-offs, kills penalties, hits people; a 200-foot player, you might say).

Trocheck also came in a little cheaper (an average annual value of $5.6 million for seven years as opposed to Malkin’s $6.1 million over four).

Yet even if Letang and Malkin remain everything the Penguins adamantly still perceive them to be at their advanced ages (Letang is 35, Malkin is fast approaching 36), keeping both in the fold doesn’t make the Penguins a different team or a better team.

And they clearly need to be both in the postseason.

If it remains their intent to achieve that by building around the “championship core” they’ve left themselves precious little room with which to work under the salary cap.

The Pens needed cap space to get a defensemen (or two) capable of actually defending in front of the net (Jan Rutta is a step in the right direction more steps need to be taken).

And they need a forward (or two) with the capability to respond when the Jacob Troubas of the NHL world start throwing elbows.

The Pens aren’t going anywhere in the playoffs anytime soon until they deal with both of those deal-breakers in their collective game.

And if they’re fortunate enough to do so, the head coach is still going to have to swallow hard philosophically and stop bringing a knife to a gunfight (appropriate responder Ryan Reaves has been to a Stanley Cup Final and a conference final since his brief tenure in Mike Sullivan’s doghouse ended in February of 2018).

These types of acquisitions can and often are made over the course of a regular season.

The Pens made game-changing trades in four of their five Stanley Cup seasons (two of which included the in-season jettisoning of the head coach).

You don’t have to have what you suspect might be a Cup-capable roster in place in October.

But you have to have room to maneuver to significantly alter your team mid-stream.

Perhaps Hextall will eventually be able to free up some space by finding a taker for Marcus Pettersson or Jason Zucker (if that’s the case Hextall should be named GM of the Year before a game is even played).

If not, the roster in 2022-23 is destined to look as familiar as it will uninspiring.

With Letang and Malkin back, and with the shrewd decisions made on Bryan Rust and Rickard Rakell, the Pens are a good bet to make the playoffs.

And an even better bet to exit the postseason quickly.

Eventually, they’re going to have to acknowledge a calendar.

Even if the set list hasn’t significantly changed since then.