Perspectives: The Places We Live

Writer Carolyn Menke explains how real the pull of Pittsburgh is –– even to someone who wasn't born here. 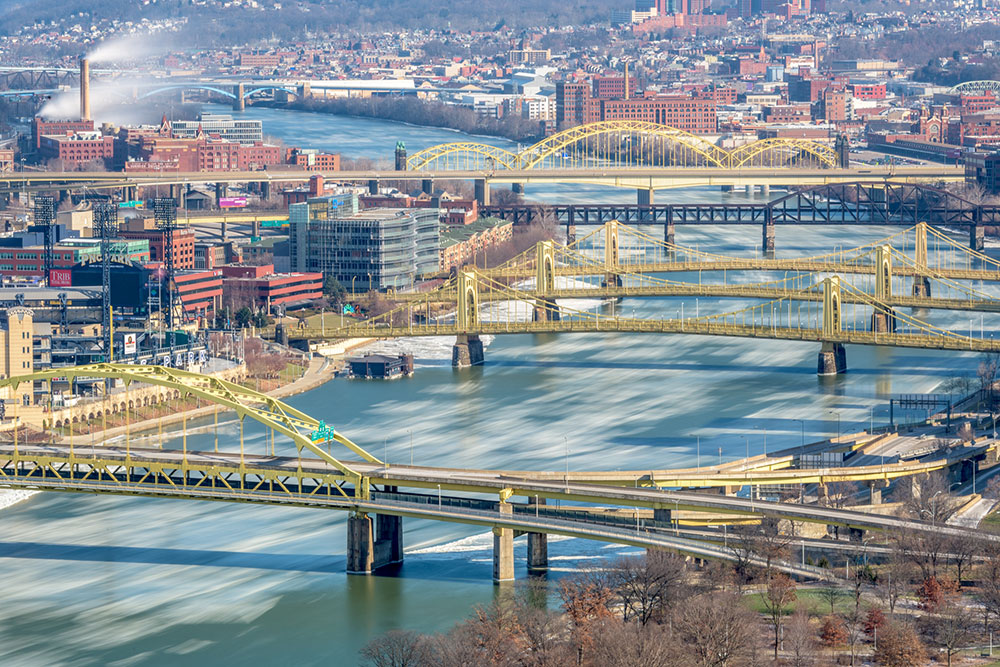 Pittsburgh had always been the place my family visited for the holidays, in the dead of winter, when the three rivers froze and splintered like peanut brittle. I remember tunnels, bridges and climbing the narrow set of stairs to reach my Ukrainian grandparents’ home perched on the bluff overlooking McKees Rocks.

The wind whipped my hair, but once I stepped inside, my cousins, great aunts and uncles, and family friends whose presence was a constant, covered me in warmth and togetherness — and Steeler jerseys. My immediate family moved many times as I was growing up, but no matter where we ventured, we always made it back to visit.

Then I moved here myself. I was a freshman at Carnegie Mellon University, and locals couldn’t place my accent. “Where are you from?” asked a lady in a Squirrel Hill deli. I didn’t have a quick answer. She hadn’t asked where I was born. “From” felt different. “From” was more complicated.

During college, my grandpa, John Skarada, often invited me over for dinner. “Eat,” he’d command, shoveling pierogies onto my plate and ladling more soup in my bowl. “Don’t be bashful.”

Everyone wanted an invite to grandpa’s house, and it wasn’t just for the food. He told the best stories, gave us Slavic nicknames and took care of us. Once, my car was stolen in Schenley Park and deserted by the thief because it ran out of gas. It was my grandpa and Uncle Dennis who scoured junkyards until they found just the right triangular back window to replace the broken one.

Near the end of my senior year at CMU, I had no real hometown to return to. New York City was a possibility; I’d spent the previous summer on my sister’s Upper East Side couch, interning at an ad agency in Rockefeller Center. Then Westinghouse tapped my shoulder. Stay in Pittsburgh? I’d always thought of this city as a stepping stone — another place I’d inevitably leave.

On my graduation weekend, my maternal grandparents, Bill and Bertha Charlesworth, who had also grown up in Pittsburgh, wanted to show me their childhood homes. We got in the car and grandma directed me to East Liberty and Euclid Avenue. “See that window?” grandma pointed. “I was born in that room.”

A young couple on the front porch asked if we needed something and then invited us in, eager to piece together how the original staircase turned so they could restore it. I was touched by their interest as they worked hard to breathe life into a piece of history.

My grandpa had lived in Oakland, where his family rented rooms to boarders to make ends meet after boldly leaving Donora for a better life in the big city. He and his siblings went on to earn bachelors, masters and Ph.D.s at the University of Pittsburgh — their way out of poverty. He and my grandma raised my mom and her brothers in nearby Beaver.

I had roots here, deeper than I realized. And there was something special about this place. I took the Westinghouse job — and I stayed.

It’s the people. That grit, resilience and pride are what make this city great. We’re not perfect. We don’t claim to be. We’re happy to have you over for dinner, to make small talk with you at the deli and to gather for Steeler games. Natives often return to start businesses, raise their children, be closer to family. The pull of Pittsburgh is real.

And I love that our three daughters are growing up climbing those same steps in McKees Rocks, now to visit Great Aunt Mary, who at age 93 still lives in her original home on the bluff where my baba raised my grandpa and where my grandma taught me to dance the polka.

The places we live, they shape us. They become part of who we are. I’m grateful for all of the places my parents moved, opening my mind to how other people live, other cultures and ways of life. It’s probably why I love the thrill of walking into a room full of new people and stepping into their world.

To the couple on that front porch who invited us in that day — thank you. To those who yield without honking at my 16-year-old daughter during extreme lane changes over the Fort Duquesne Bridge — thank you. And to the lady at the Squirrel Hill deli who took the time to ask about me, I have a clear answer now. I say it proudly. I’m from Pittsburgh. And I wouldn’t have it any other way.

Carolyn Skarada Menke is the author of “Return to Me,” a WWII historical fiction novel set in Pittsburgh and Pennsylvania.

This article appears in the April 2020 issue of Pittsburgh Magazine.
Categories: Collier’s Weekly