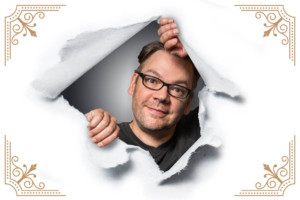 Quintessential funny man Derek Hughes has been lauded by audiences and critics alike, with the New York Times calling him “thoroughly entertaining.” Awarded First Place in Stage Magic by the International Brotherhood of Magicians, Hughes has performed his magic on MTV, VH1, Comedy Central, and the CW’s Penn & Teller: Fool Us. Derek has joined the ranks of the Marvel Cinematic Universe, having appeared in Captain America: The Winter Soldier and Marvel’s “Agents of S.H.I.E.L.D.” He’s a consulting producer on TRUtv’s hit magic series, The Carbonaro Effect and was a finalist on season 10 of NBC’s America’s Got Talent where he gained notoriety for his provocative materializations.