Could You Keep Your Wedding a Secret – From the Guests?

Dallas Sauers and Joe Michelucci surprised family and friends with their wedding after weeks of leading them to believe they were attending a completely different event. 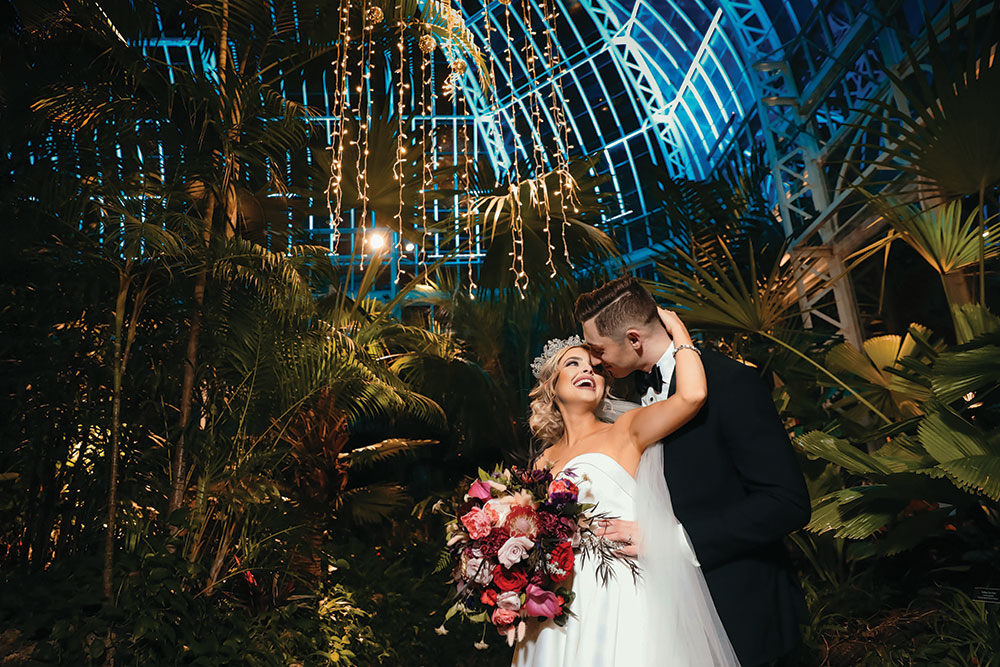 In 2018, Dallas Sauers was chosen as one of Pittsburgh Magazine’s Women & Business honorees.

So her family believed Dallas, who owns Dallas Beauty Lounge in Bridgeville and Market Square, when she invited them, along with her fiance Joe Michelucci’s family, to the Women & Business 2019 event.

It was set to be a black tie gala — that the couple had completely made up.

When their families arrived at Hotel Monaco, dressed up and ready for a formal event in March 2019, they found out they were going to be attending Joe and Dallas’ wedding. 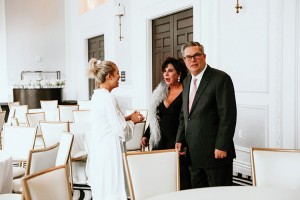 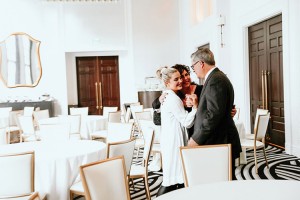 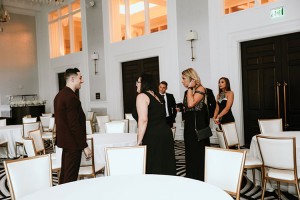 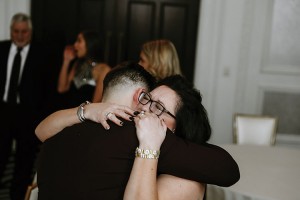 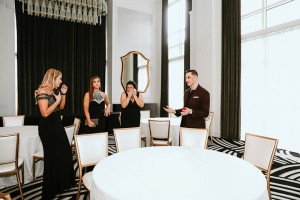 “We knew from attending about a million other weddings exactly what we didn’t want,” says Dallas. “We didn’t want a big wedding or to waste money on a few hours, or to have our parents’ friend’s extended cousin show up. So we planned it to the T exactly how we wanted.”

Years prior to their engagement, Dallas’ parents sent her an elopement video of a couple getting married in Savannah, Georgia. She and Joe loved the idea of an elopement but did not want to break their parents’ hearts, so they found a way to elope in Pittsburgh. 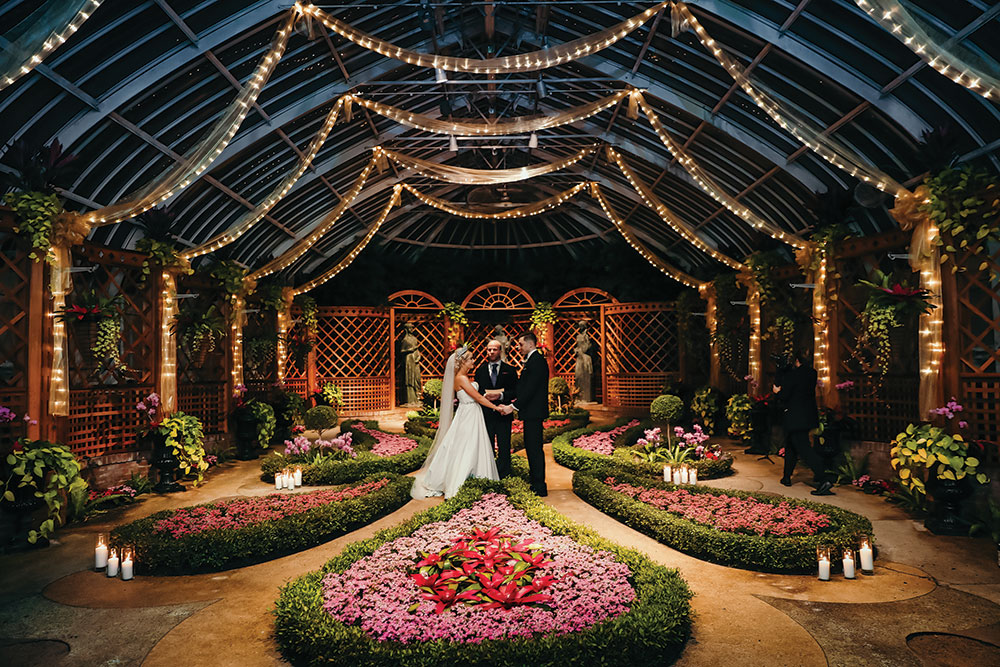 With the help of Kimberly Allera from Olive & Rose Events, a wedding planning company in Mt. Lebanon, the pair planned a secret wedding.

“The wedding was so much easier to plan with just Joe and me. We handled everything together and only together, so I think it actually sped up the process,” says Dallas. “Having input from 100 people makes you second guess everything and look at a million options. Joe and I are very much alike in that way — very efficient.”

Once the details were planned, it was time to get the 11 guests to the ceremony. Dallas and Joe decided to make fake invitations to invite their parents, one friend each and their siblings to the 2019 “gala.” 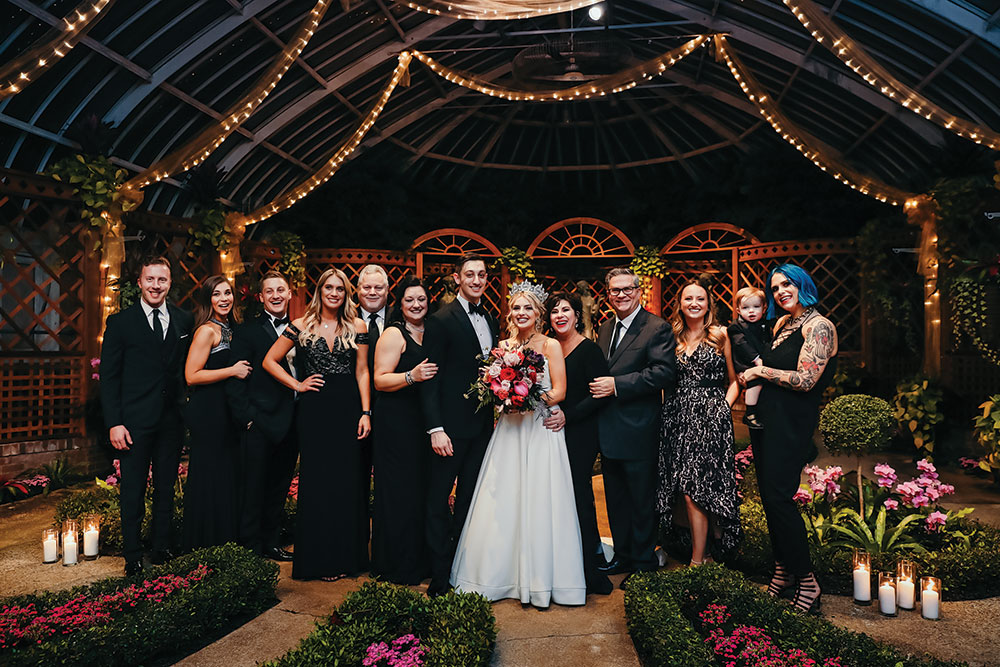 To further throw everyone off, Dallas even turned to social media to post about wedding planning as if they were tying the knot in summer 2019. She added a post about the gala too.

On March 9, 2019, the couple’s guests arrived at Hotel Monaco Downtown, dressed and ready for the “gala.”

“Joe and I both told our families separately,” says Dallas. “Both families were shocked, but my parents always expect crazy things from me so I don’t think they were as shocked as Joe’s family. Joe’s parents started crying.” 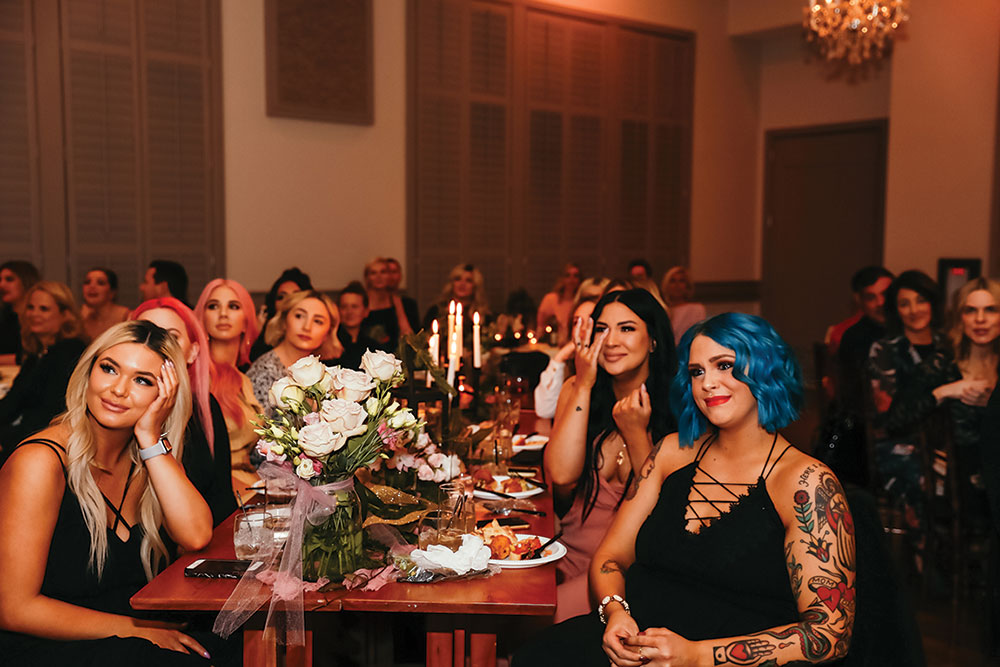 After the initial shock wore off, the couple and their guests made their way upstairs to their hotel suites for hair and makeup by Dallas Beauty Lounge.

The bride and groom then took two separate limos to their venue, Phipps Conservatory, which they rented after business hours. In the Broderie Room, the couple and their guests were surrounded by the winter flowers and twinkling lights as they exchanged vows.

While their ceremony guest list was small, the couple wanted to celebrate with their extended family and friends with a larger reception of 150 guests. Two weeks after they said “I Do,” the newlyweds invited guests to their “engagement party” at Noah’s Event Venue in Southpointe. 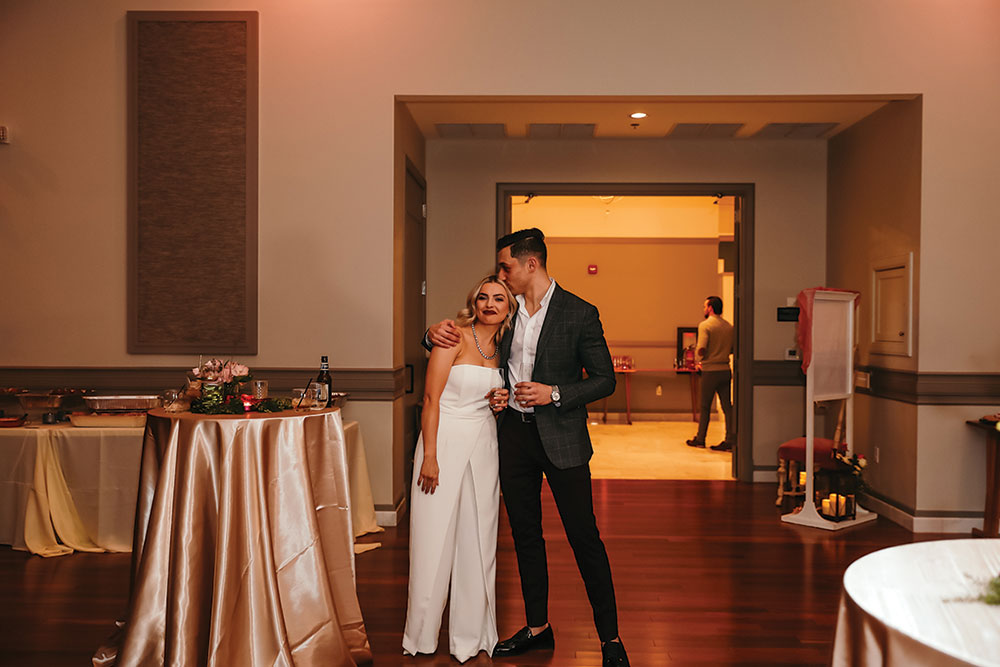 Not long after their engagement, the couple contacted Megan Sutherland of Pictory Productions, who had filmed the video for the Savannah elopement. When she was booked on the day they wanted, they changed their venue and their date to March to make sure she would be the one to create the video they would later play to reveal their surprise.

All of the non-wedding footage was filmed in three locations before the wedding: Starbucks (where the couple met in 2011), the second floor of the Fairmont Pittsburgh (the location of their second date) and Market Square. Sutherland also attended their wedding ceremony. 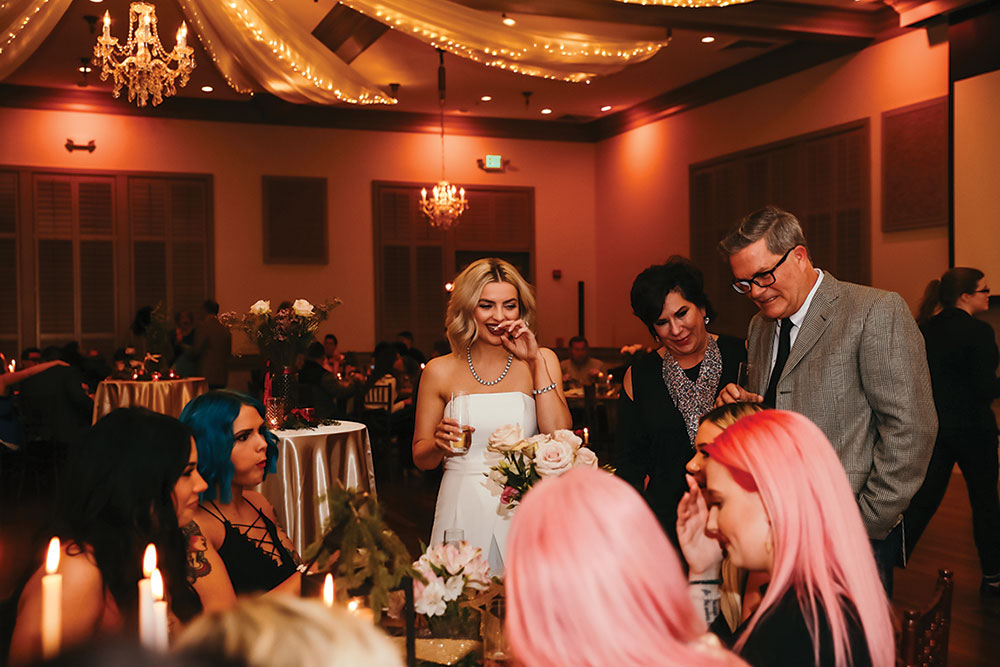 The couple sent out invites with a photo from their engagement pictures, which were taken in Iceland. On the day of the party, guests entered the venue expecting to celebrate Joe popping the question.

Upon arrival, they were greeted with corn hole, drinks, bites to eat and a caricature artist. The night progressed like any other engagement party until roughly an hour into the night when the couple called for everyone’s attention. Then they played their video.

“The best reaction was my best friend’s mom because she actually set the whole engagement party up for us,” says Dallas. “Only the guests who were at our wedding knew, so everyone was so surprised.

“We partied the night away and felt great about having the best of both worlds: a small wedding with people we care about the most and a bigger celebration with our friends and family.” 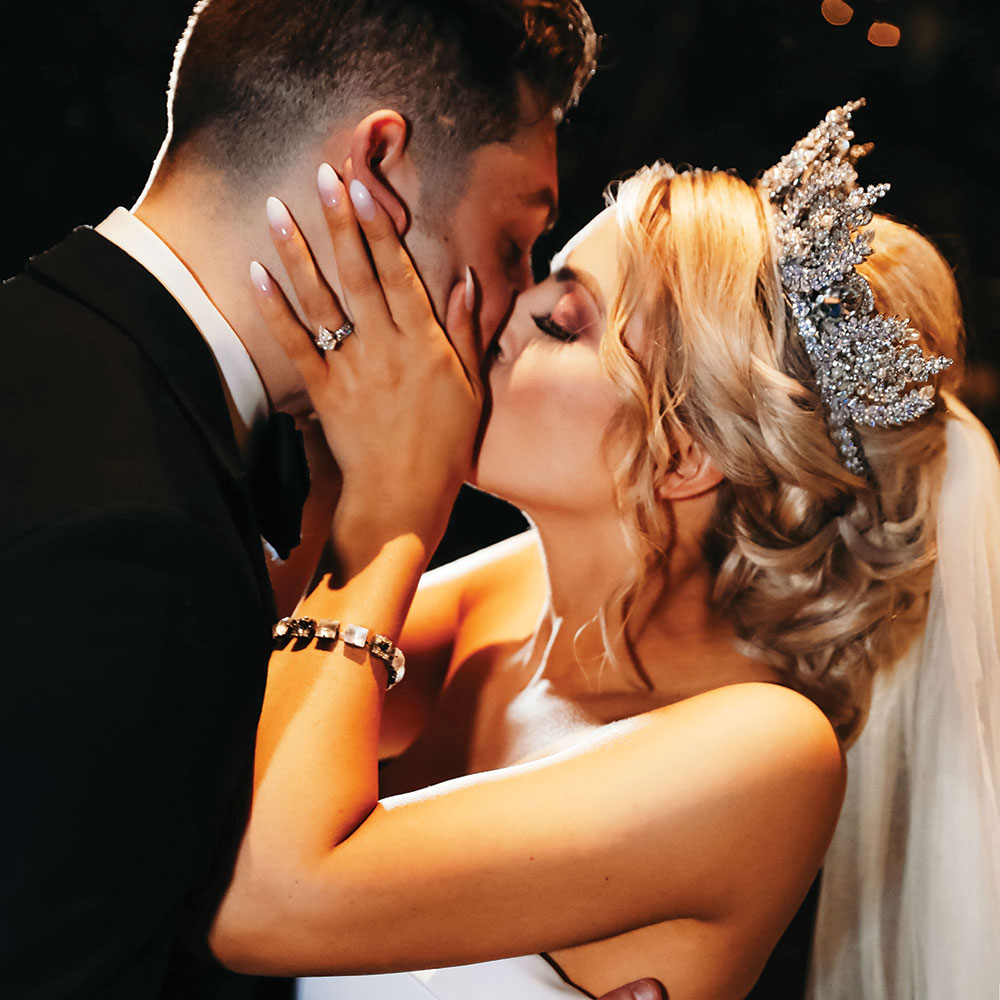 Ask the Expert: How to Find the Perfect Place to Tie the Knot