Literacy Pittsburgh’s mission goes beyond teaching people to read — but that mission remains a pressing concern. 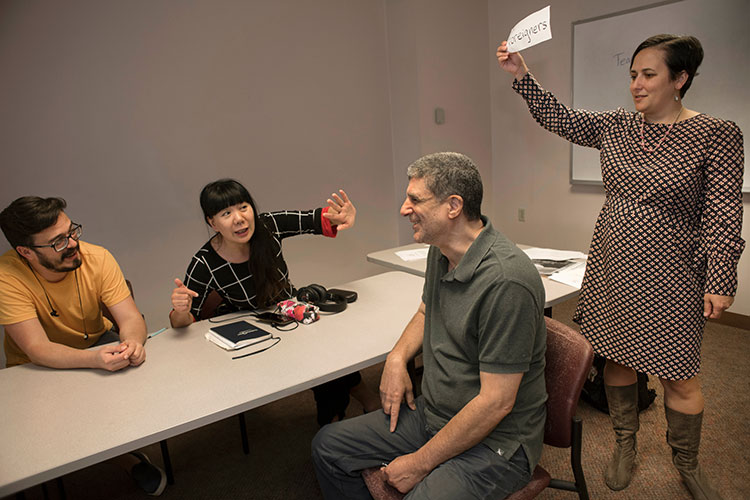 The last Thursday afternoon in August was a relatively quiet one in the Downtown headquarters of Literacy Pittsburgh, which usually sees 150 to 200 students each day.

That’s not to say the space was empty or still.

“I don’t think I’ve ever seen the pace of change and growth as rapidly as I do now,” says Executive Director Don Block, stepping out of the way for staff members carrying boxes into freshly painted rooms — which today host a training for volunteer tutors in the Oasis Intergenerational Tutoring Program. One of the changes is the name itself; for almost 40 years, until last spring, Literacy Pittsburgh was known as the Greater Pittsburgh Literacy Council.

In one of the adult classrooms, an English as a second language group read and talked about the upcoming Labor Day holiday.

That’s on Monday, right?” Block gently quizzed the room before the teacher resumed. The lesson that day allowed students to practice both mid-level English and learn about American life. A sheet of paper on the wall kept track of other cultural norms — what is polite or rude in the classroom or on the bus. Another held lists of English’s seemingly lawless verb conjugations; another offered ways to express confusion.

“There’s a challenge in public awareness about our name,” Block, who joined as executive director in 1984 and will retire at the end of this year, says. 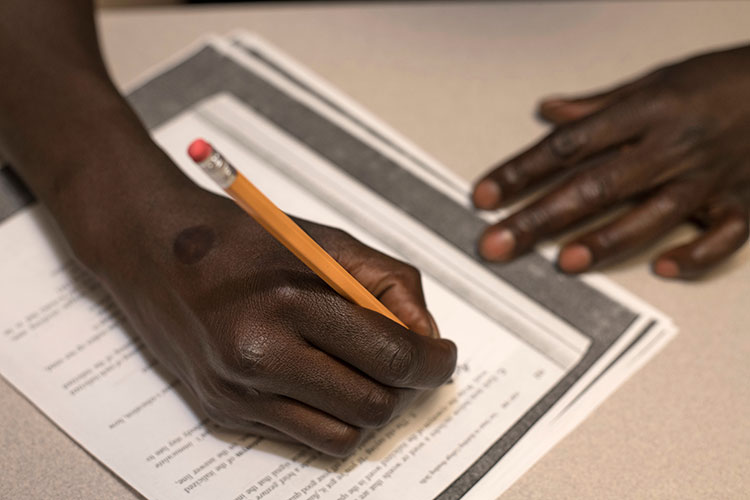 The organization defines literacy differently, he explains, than the average person, who might only assume the word refers to basic reading skills. In addition to core educational programming, the organization is heavily connected to social services and makes myriad referrals — food banks, domestic violence, legal and housing, among others.

When the organization was founded, by Mary Yardumian out of her Mount Lebanon kitchen, in the late 1970s, literacy was still a young field. There were no similar services in the city.

Even back then, Block says, “nobody could understand that this country could possibly have an issue around adult education.” Just like today, people asked what was wrong with or assumed laziness about those who had low literacy — individuals who themselves often grow up thinking they aren’t smart enough to succeed or are undeserving of educational opportunities.

Large cities generally run adult education through their public schools. Pittsburgh Public Schools closed its program more than a decade ago; it wasn’t mandated and cost too much money. The Pennsylvania Department of Education recently reformulated its literacy-related grants, reducing four in Allegheny County to one — the one being Literacy Pittsburgh. In 2018, the organization entered into a collaboration with Goodwill of Southwestern Pennsylvania to provide oversight of its adult literacy programs and expanded into Beaver County; the expanded footprint added 650 students.

“[Literacy Pittsburgh is] one of the larger and more sophisticated nonprofits of its kind,” says Block. “We’re entirely focused on [adult education]. That’s what school districts struggle with. Their primary focus is K-12.”

A few years ago, the executive committee of the board of directors asked that the organization assess itself for how it might grow and reach more people.

“We had a tremendous amount of respect in the community,” says board president Gary Singery. “A lot of people recognized the impact that we have, but [thought] that it was a little stale.”

They were seen as a button-down organization and saw greater potential in “a younger, more vibrant look.” In May 2018, they launched the new name and look, paired with a new mission, vision and values statements. 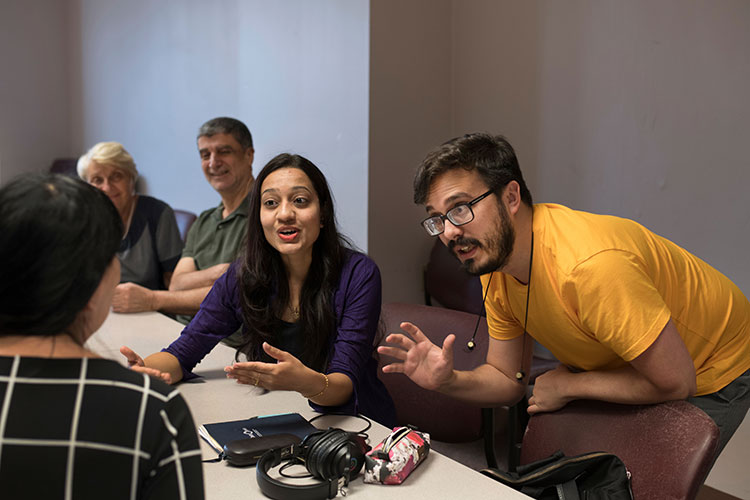 While hundreds of students pass through Literacy Pittsburgh’s Downtown headquarters daily, the organization accommodates students meeting at locations throughout the region.

Program availability is dictated by student demand — most recently, preparation for the citizenship test. “Wherever 10 or more people will come together and commit to having a class, we’ll be there. That’s a flexibility that we’re known for,” Block says.

There is also corporate demand that Literacy Pittsburgh meets via on-site training in workplace literacy, which includes English, math, writing, workplace communication skills and cultural awareness. For instance, the Westin Convention Center hired Literacy Pittsburgh to work with its housekeeping staff. Since then, Block says, the turnover rate has dropped dramatically. It used to be that companies were only willing to entertain such services if they were subsidized. Now, they’re more willing to front the cost, since the payoff is high.

Literacy Pittsburgh students have a few options for the organization’s flagship programs. Classes in the Downtown office are taught by staff members. Groups and one-on-one opportunities are available throughout the community by more than 650 volunteers, who are trained and monitored by coordinators for quality control. The program also hosts 22 Compass AmeriCorps members, who provided 38,000 hours of service last year. More than 200 community partnerships — with libraries, churches, coffee shops and other locations — provide space and additional resources for volunteers and students.

Even with all of this support, there is still a 200-person waitlist. “It’s very much a hidden issue to a lot of people,” Block says. 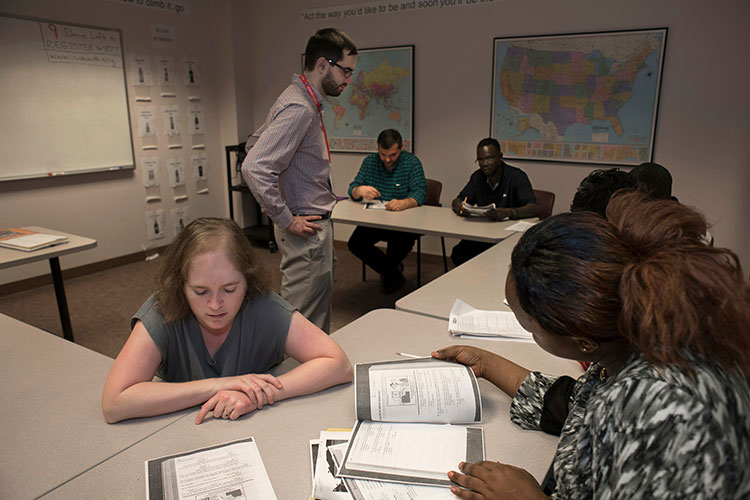 In addition to teaching reading and writing skills, Literacy Pittsburgh offers a range of training including career counseling and immigrant services.

Nationally, approximately 15 percent of adults struggle with low literacy or English language skills. About 40 percent do not have the necessary skills for postsecondary education, which can also keep them from career advancement. In Pennsylvania, 700,000 adults of working age (18 to 65) do not have a high school diploma. At a hearing in Harrisburg, Block asked state legislators, “Do you want to condemn those people to public assistance, or do you want them to become productive adults?”

According to research from the National Institutes of Health, the mother’s reading skill is the most significant predictor of a child’s future academic performance. A high school equivalency diploma can increase earnings potential by $378,000 over a lifetime. In a January 2017 op-ed in the Pittsburgh Post-Gazette, Block wrote, “Adult education results in smaller numbers of people on public assistance, food stamps, unemployment compensation and other government benefits. One study says the return to the economy is $8 for each dollar invested.”

While all of Literacy Pittsburgh’s programs are free to the 4,500 students served each year, the annual cost to the organization for each student is $625. By the study’s metric, that’s a $22.5 million economic return.

A colleague of Block’s described adult education as “double-duty dollars.” When a child sees a parent learning, that child retains the importance of studying in their own education. Family literacy programs give parents not only the opportunity to better their own education, but also to do so at the same time as their young children, which removes the childcare barrier. “It becomes a kind of parenting education as well as literacy,” says Block. “Now they’re learning how to play and teach their child.”

“It’s really apparent when we’re able to see the impact that the organization has,” Singery says. Literacy Pittsburgh boasts that 74 percent of students report increased confidence with their English, reading, writing or math skills; after 50 instructional hours, 71 percent show improvement on standardized tests.

“Every time we’re able to provide services to these individuals, they’re able to come out on the other side stronger economically,” he says. “We can slowly help raise the tide of success and go back to our mission — better lives through learning — one student at a time.”